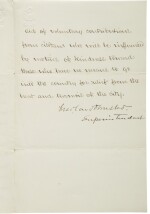 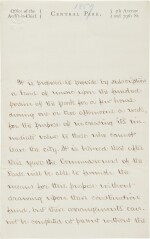 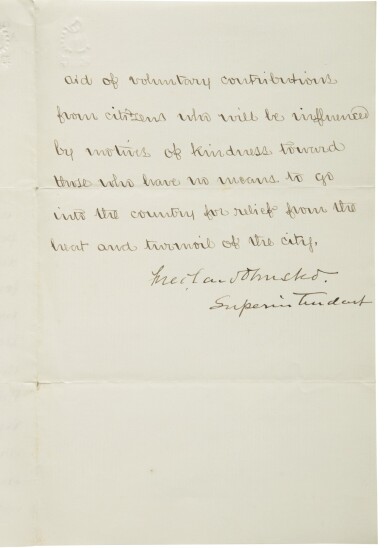 LETTER SIGNED ("FRED. LAW OLMSTED.") AS SUPERINTENDENT OF CENTRAL PARK, REGARDING ITS PHILOSOPHY

An early letter outlining the philosophy of Central Park

Olmsted served as Superintendent of Central Park during its construction, and the present letter was presumably written to solicit a musical volunteer. Olmsted writes: "It is believed that after this year the Commissioners of the Park will be able to furnish the means for this purpose [the hiring of a band] without drawing upon their construction fund, but their arrangements cannot be completed at present without the aid of voluntary contributions from citizens who will be influenced by motives of kindness toward those who have no means to go into the country for relief from the heat and turmoil of the city."

Olmsted was committed to egalitarian principles, which were very much reflected in the conception and design of Central Park. He strongly believed that common green space should be equally accessible to all citizens, and should be defended against private encroachment. In many respects these were the foundational ideals of a "public park," and much of Olmsted's time as commissioner of Central Park was spent working to protect these principles, as the present letter demonstrates.