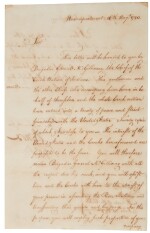 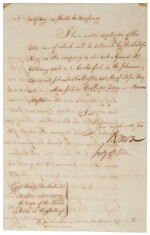 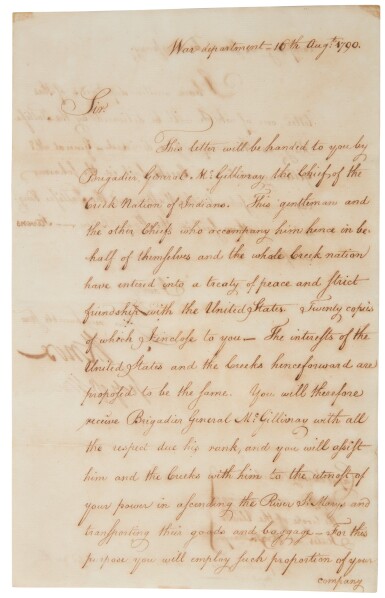 LETTER SIGNED (H. KNOX") AS SECRETARY OF WAR, TO HENRY BURBECK "OR, OFFICER COMMANDING THE TROOPS OF THE UNITED STATES AT THE ST. MARY'S," INTRODUCING CREEK INDIAN LEADER ALEXANDER MCGILLIVRAY

At the time of writing, Alexander McGillivray was the newly minted U.S. Army Brigadier General, a result of the Treaty of New York, which was signed days before on 7 August 1790 between leaders of the Creek people and Henry Knox. With the Creek Indians about to depart, Knox writes here to inform Burbeck, who probably already knew McGillivray, "this gentleman and the other Chiefs who accompany... have entered into a treaty of peace and strict friendship with the United States... The interests of the United States and the Creeks henceforce are proposed to be the same. You will therefore receive Brigadier General McGillivray with all the respect due his rank."