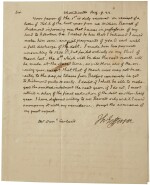 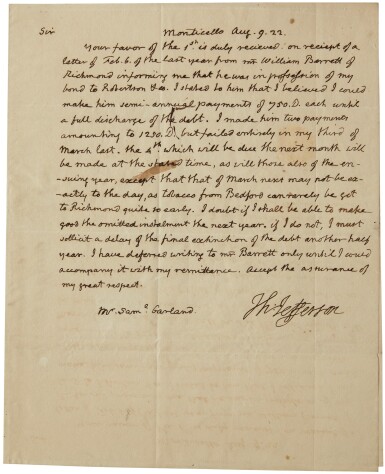 "I doubt if I shall be able to make good the omitted instalment the next year." Thomas Jefferson was in debt for much of his life: although he was land rich, his farming was not remunerative; he inherited significant debt when his father-in-law died; he maintained a lavish lifestyle; and the financial panic of 1819 affected him as well as his own debtors. As this letter makes clear, 1822 was a particularly trying year as Jefferson was forced to put off his creditors again and again.

"Your favour of the 1st is duly recieved. on reciept of a letter of Feb. 6. of the last year from mr William Barrett of Richmond informing me that he was in posession of my bond to Robertson & co. I stated to him that I believed I could make him semi-annual payments of 750.D. each until a full discharge of the debt. I made him two payments amounting to 1250.D. but failed entirely in my third of March last. the 4th which will be due the next month will be made at the stated time, as will those also of the ensuing year, except that that of March next may not be exactly to the day, as tobacco from Bedford can rarely be got to Richmond quite so early. I doubt if I shall be able to make good the omitted instalment the next year. if I do not, I must sollicit a delay of the final extinction of the debt another half year. I have deferred writing to mr Barrett only until I could accompany it with my remittance. Accept the assurance of my great respect."

Samuel Garland was a Lynchburg attorney who was forced to chase Jefferson more than once during the 1820s. William Barrett was a wealthy client of Garland, and Archibald Robertson was a Richmond merchant.