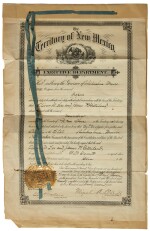 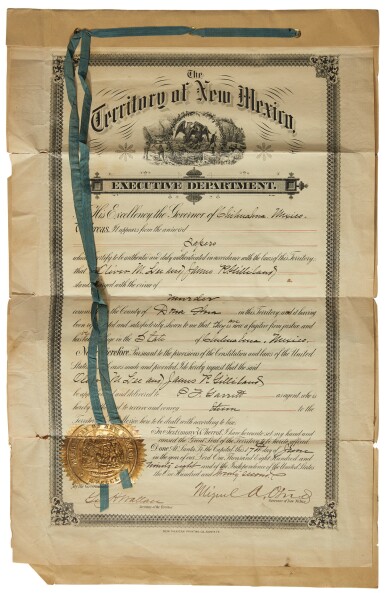 Two typewritten documents, each ½ page (11 ¾ x 8 in; 300 x 202 mm), Dona Ana County, New Mexico Territory, 7 April and 1 June 1898; part of a six-page legal document, the partially printed cover sheet signed by Miguel A. Otero as Governor of New Mexico Territory, Santa Fe, 17 June 1898, and including three pages of related typewritten documents signed by local officials, Las Cruces, 1898. Cover sheet an elaborately printed official form with a gold-embossed state seal at lower left, the green ribbon extending from the seal through binding holes at top, the whole previously folded and encased in a paper cover docketed: "Requisition by the Governor of New Mexico, U.S.A. for Oliver M. Lee and James R. Gilliland Charged with Murder." Overall some browning and separation at folds, not affecting the Garrett documents.

Though his name is forever tied to Billy the Kid, the most important case in Pat Garrett's career was perhaps the disappearance of Albert J. Fountain and his young son. Fountain was a prominent figure in the political life of southern New Mexico; a politician, lawyer, and outlaw chaser in equal measure. In his capacity as chief investigator and prosecutor for the Southeastern New Mexico Stock Growers Association, he spent the early weeks of 1896 securing indictments on cattle rustling for a number of suspects, among them ranchers Oliver M. Lee and James Gililland.

Fountain and his 8 year-old-son Henry went missing on 1 February 1896 in the desert that is now part of White Sands National Monument. Lee, Gililland, and their associates William McNew and Bill Carr quickly became the chief suspects, and Garrett, who had been recently appointed Sheriff of Las Cruces, petitioned a judge on 11 July for warrants for their arrest. Within hours, he had nabbed McNew and Carr, but Lee and Gililland proved more elusive. A confrontation between the fugitives and Garrett's posse in the early morning hours of 12 July led to the pair's escape, and they would remain at large for the next 8 months.

The present collection of documents details Garrett and his fellow lawmen's attempts extradite the fugitives. They were thought to be in Mexico, and Governor Otero's document is an extradition request of the Governor of Chihuahua. The two documents signed by Garrett are affidavits relating the events of their escape and the subsequent attempts to locate Lee and Gililland. The other supporting documents are copies of the complaint, the arrest warrant, and application signed by District Attorney John D. Bryan requesting Governor Otero to initiate the extradition procedure. After their eventual apprehension, Lee and Gililland would stand trial the following year, but were ultimately acquitted due to a lack of evidence. The trial lasted 18 days and was marked by the histrionics of opposing counsel, which included Fountain's onetime political rival, and future U.S. Senator Albert B. Fall. Fall would later become embroiled in his own scandal, and was convicted of accepting a bribe in the Teapot Dome scandal.