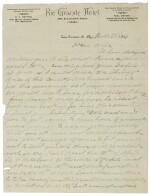 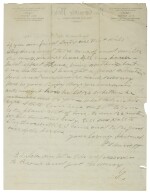 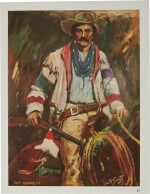 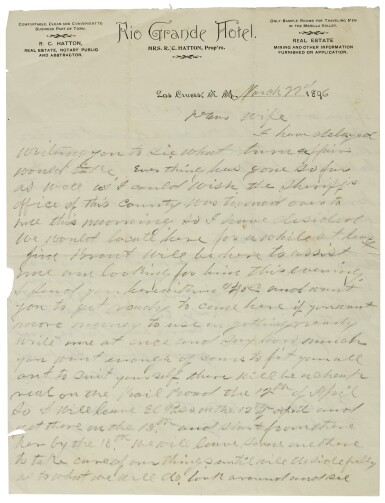 AUTOGRAPH LETTER SIGNED ("P. F. GARRETT") AS SHERIFF OF DONA ANA COUNTY, NEW MEXICO TERRITORY, TO HIS WIFE APOLINARIA GUTIERREZ GARRETT, REGARDING THE RELOCATION OF THEIR FAMILY TO NEW MEXICO, AND THE SEARCH FOR ALBERT J. FOUNTAIN

The lawman who killed Billy the Kid relocates to New Mexico, and tries to solve the mysterious disappearance of Albert J. Fountain

With lawlessness threatening designs for statehood, New Mexico Territory had brought famed lawman Pat Garrett back from Texas, first hiring him as a private investigator, then manipulating him into the position of Sheriff of Dona Ana County in hopes of arresting the killers of southern New Mexico political leader Albert J. Fountain and his young son. They were probably murdered 1 February 1896 in what is now White Sands National Monument, northeast of Las Cruces. Evidence pointed to allies of political rival Albert B. Fall, who later became U.S. Secretary of the Interior and went to prison in the fallout from the Teapot Dome scandal. Though Garrett made several arrests (see following lot), the Fountains' bodies were never found, and their disappearance in the White Sands desert remains officially unsolved.

In the present letter, having resolved disputes over his official position, Garrett writes hopefully to his wife regarding arrangements for the family to be reunited, including a newly born son, of whom Garrett poignantly entreats his wife for more information: "I have delayed writing to you to see what turn affairs would take. Everything has gone so far as well as I could wish, the Sheriff's office of this county was turned over to me this morning, so I have decided we would locate here for awhile at least ... I send you herewith $40.00 and want you to get ready to come here ... I have got a good situation here and can make some money. How is your baby boy? You have never wrote me yet how he looks. Whether he resembles me or you. What color is his eyes? I will leave here on the 24th to go on to the plane east of here to make another [search] for Col. Fountain's body."