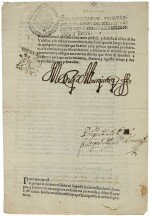 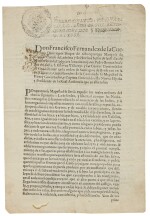 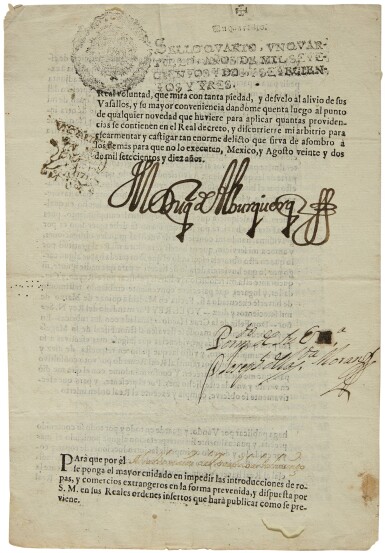 A proclamation by King Philip V, the young Frenchman on the Spanish throne, certified by Alburquerque and directed to a local official in Mexico. Issued near the end of the War of Spanish Succession in Europe, this decree was aimed at pirates, the English navy, and his own subjects who might have been tempted to trade with the enemy. The document begins with the King's complaint about "the liberty with which foreign nations have been introduced to trade in the Indias … the sailing of those seas is so significant and repeated, as Detrimental to my Kingdoms … it is my duty to secure the indemnification of my rights, the authority of the law, the public welfare and the livelihood of my subjects, each of which has been violated by the excessive practices … it is my resolve that henceforth these laws and regulations be observed fully … and that the penalties established … be applied without remission … if the Council believes that the high point they have reached needs increased punishment … consult with me. …"

At the conclusion of the decree, Alburquerque has ordered the execution of its measures in Mexico, observing that the proposed punishment would serve as a deterrent.

While the phrase "boldly signed" is overused, it is certainly justified in this instance.