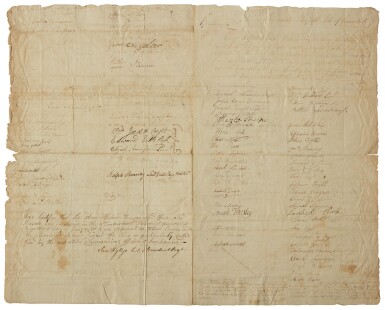 Connecticut: manuscript document signed by the commander of the Third Connecticut Regiment and almost 200 of his men

Connecticut: manuscript document signed by the commander of the Third Connecticut Regiment and almost 200 of his men

MANUSCRIPT DOCUMENT SIGNED ("S. WYLLYS") AS COMMANDING OFFICER OF THE THIRD CONNECTICUT REGIMENT, FURTHER SIGNED BY ALMOST 200 OF HIS MEN

A single document bearing the autographs of nearly 200 Revolutionary Patriots

Since the Third Connecticut was stationed in the Hudson Highlands, this document evidently originated in Hartford and was sent into the field for signatures of soldiers affirming that they were due pay for having been in service prior to 1 January 1780. The signatures are in columns with each company's signatures appearing above nine identical statements certifying their service. The arrangement of these statements, and that all are in the same small clerical hand, indicates their preparation in advance. Each is signed by a company officer or, in some cases, a sergeant. Nine officers have signed near the conclusion including Paymasters Lts. Ralph Pomeroy and Samuel Richards. At the end, Colonel Wyllys has signed an overall certification for the Regiment "that the above Officers, Non commisd. Officers and Privates were in Service in the 3d Connecticut Regiment previous to and on the 1st Day of Jany. 1780 & are at present in actual service with the Regiment & have signed the Order as particularly certified by the respective Commanding Officers of Companies."

Either laboriously scrawling their names or merely making an "X", nearly 200 Patriots signed the present document. All were enlisted to fight for their country, though it is unlikely that any had a later significant connection with history. Two identifiable black soldiers have signed with marks: they are shown here as "Suyfacks Mosley" and "Newport Hail." Record of Connecticut Men in the War of the Revolution has both listed twice as Cyphax Mosley and Cyphax Negro, and Newport Hale and Newport Negro. Both were in Captain Edward Eells' company which contained a few other black soldiers during the war. As Syphax Mosley and Newport Hale they are noted in Connecticut's Black Soldiers 1775-1783 and consequently in Black Soldiers Black Sailors Black Ink.

The Third Connecticut saw relatively little action, being assigned to the Highlands for most of the war. Post-Monmouth it joined the main Continental Army for about a year, returning to the Highlands posting in May of 1779. Their Colonel, Samuel Wyllys, was the son of the longtime Secretary of Connecticut (and a Loyalist) George Wyllys.