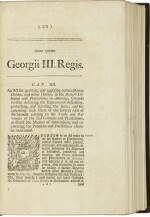 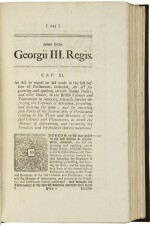 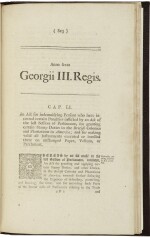 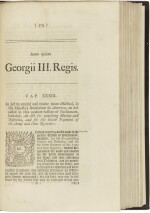 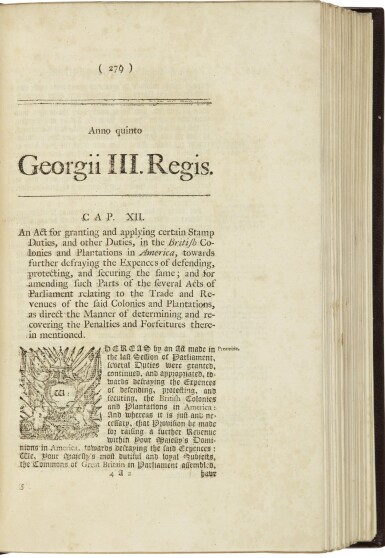 AN EXTENSIVE AND IMPORTANT COLLECTION OF OVER 1,900 ACTS OF BRITISH PARLIAMENT, COVERING THE MONARCHIES OF THE FIRST THREE HANOVERIAN KINGS, GEORGE I, GEORGE II, AND GEORGE III, 1714–1789

An unusually comprehensive collection of British Parliamentary Acts, including a great many dealing with the North American colonies. The collection covers a period marked by significant historical events and developments, including the introduction of the Hanoverian Rule in Great Britain; Whig-dominated politics; the strengthening of the position of the Church of England; and the Government responds to the Jacobite uprisings in 1715, 1719, and 1745 (two descendants of James II, the deposed Stuart King, threatened to take the throne in the so-called Jacobite risings, and were supported by "Jacobites" throughout the realm), cracking down on the insurgents and passing the so-called Regency Acts. There were episodes of planned French invasions of Britain (in 1744 and 1759 respectively) and of Scottish clan rebellions, both of which of course included Jacobite support. Despite these periods of unrest, there was also political stability: eighteenth-century Britain saw the gradual modernization of the constitutional monarchy and a further development of the administrative and judicial systems. This collection gives fine examples of this in legislation. Income tax was introduced, and at home a host of public works was planned and executed. Incentives were given in order to stimulate economic activities (Import and Export Acts), fishery (Greenland Act), explorations, and inventions (the reward for John Harrison’s clock). There are also examples of Acts dealing with the South Sea Bubble.

It was in this period that Britain enlarged and fortified her overseas empire. The collection includes Acts regulating maritime exploration and overseas trade and war. It was the time of the East India Company (various East India Company Acts, including those of 1772, crucial for the establishment of British Rule in India), and of the privatized African Company of Merchants (the former Royal African Company). There are also examples of the slave trade, in which slaves are seen as a mere commodity.

The highlights of the collection are those Acts dealing with the Colonies in North America, many of historically key importance, from the Colonial period through to the American Revolution.

A fuller inventory of the collection is available from Sotheby's New York Department of Books and Manuscripts.