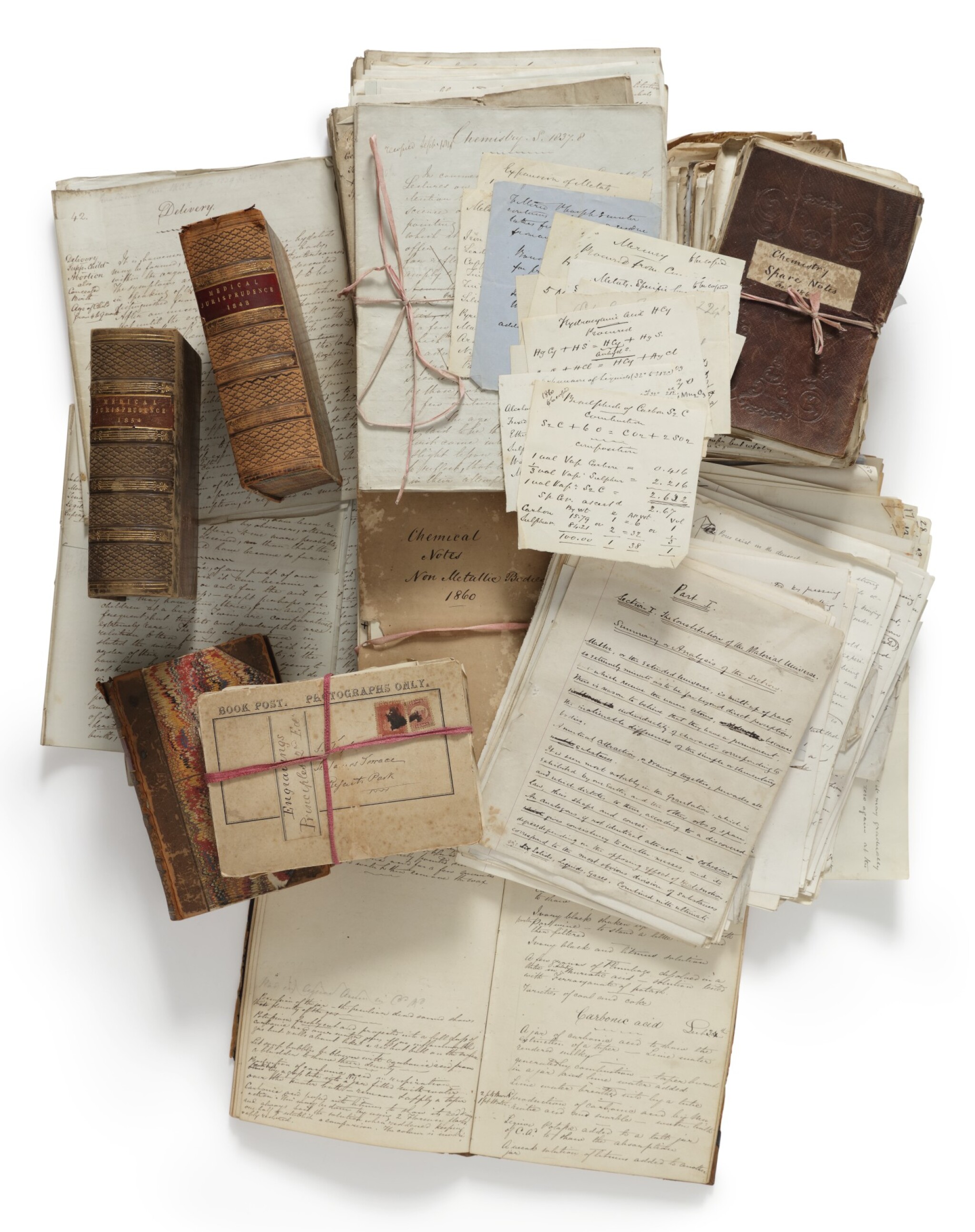 An extensive archive of manuscript material by the "father of British forensic medicine," and an early experimenter in photography, ca. 1830-1870

General contents of archive: Approximately 7,300 pp. of manuscript material in Taylor's hand, comprising notebooks, lectures, and papers, dated 1830s-1870s; 10 letters, also in Taylor's hand, totalling 25pp., and dated 14 September 1835 to 13 July 1857; 3 editions of The Elements of Medical Jurisprudence (1st, 3rd, and 5th), with annotations in Taylor's hand; a scrapbook of newspaper clippings related to the "Regent's Park Explosion"; an edition of Thermometrical Table, annotated in Taylor's hand; various ephemera, including drawings and engravings of illustrations used in Taylor's books. (For a more complete listing, please contact books@sothebys.com.) The consignor has independently obtained a letter of authenticity from PSA that will accompany the lot.

An extensive archive, offering insight into the remarkable life and work of Alfred Swaine Taylor, accomplished author and toxicologist, and the "father of British forensic medicine"

Alfred Swaine Taylor entered the united Medical School of Guy’s and St. Thomas’s Hospitals in 1823, and upon the separation of the Schools, he remained at Guy’s and benefited from the teaching of Astley Cooper and Joseph Henry Green. After qualifying in 1828, he was compelled to travel to Paris, so that he might attend the lectures of Orfila, Dupuytren, and Gay-Lussac. While residing in France, he made geological survey of Auvergne, and visited the Montpellier School before voyaging to Naples, where he remained for nine months, even publishing two papers in Italian. His homeward journey—made, incredibly, on foot across the Continent⁠—took him to no fewer than eight medical schools. Taylor then spent the winter of 1829-30 studying at Guy’s, and a stay in Paris in 1830 (at the time of the Revolution), enabled him to observe the treatment of battle wounds by Manec and Misfranc.

Throughout his education and sojourns, Taylor had shown leanings towards medical jurisprudence, and in 1831 was appointed to the newly established chair at Guy’s, which he held until 1877. This appointment afforded him the opportunity to achieve a reputation as one of the foremost authorities on this subject. His election as joint lecturer on chemistry in 1832 also enabled Taylor to garner equal renown as the leading toxicologist in the country, and the first of his long series of memoirs on poisoning appeared in the same year. Taylor’s two main books passed through many editions—some of which are present in this archive⁠—and, in his lifetime, came to be regarded both by lawyers and by physicians as standard texts. His Elements of Medical Jurisprudence, first published in 1836, which formed the basis of A Manual of Medical Jurisprudence (1844) and of The Principles and Practice of Medical Jurisprudence (1865), and his Poisons in Relation to Medical Jurisprudence and Medicine (1848) proved invaluable in systematising and legitimising legal precedents and rulings, along with relevant anatomical and chemical data. He was known to a wider public by his appearance as a witness for the prosecution in celebrated murder trials. Indeed, his own celebrity was such that Charles Dickens visited Taylor's laboratory at Guy's, and Wilkie Collins owned two copies of the doctor's treatise On Poisons. Dorothy L. Sayers also consulted Taylor's works, and based her character of Dr. Thorndyke, a forensic detective, on him. Sir Arthur Conan Doyle even mentioned Taylor's Medical Jurisprudence in his semi-autobiographical novel The Stark Munro Letters.

Incredibly, the present archive spans nearly the entirety of Taylor's illustrious career. In addition to his contributions to the fields of toxicology and forensics, he is also remembered as an early experimenter in photography, which is also reflected in this collection of material. Some of the highlights include early (ca. 1834-36) manuscript notes on toxicology addressing topics related to morphine, opium, arsenic, cyanide, etc., as well as as notes on "Analysis of Blood Stains"; manuscript titled "General Chemistry", with 26 numbered parts, approximately 920pp., which appears to be lectures given at Guy's, along with hand-drawn illustrations and diagrams, and notes on chemical compounds that were used in his early experiments in photogenic drawing; manuscript notes related to medical jurisprudence (undated, but ca. 1840-1860), for his books published under the same title, topics including drowning, lightening, pregnancy, and others; a manuscript notebook detailing accounts rendered for his services in criminal trials; notes related to the case of Isabella Banks, which proved to be the biggest misstep of Taylor's career; manuscript titled "Chemistry Spare Notes. Feb. 1868," with discussions pertaining to photography and photographic drawing; autograph letter signed, by William Thomas Brande to Taylor, dated 21 October 1839, discussing photogenic drawing, with four hand-drawn illustrations; several published works by Taylor with his manuscript annotations, including A Manual of Medical Jurisprudence (3 copies, published 1844, 1849, and 1854), "Syllabus of a Course of Chemical Lectures Delivered at Guy's Hospital" (1839), and Thermometrical Table on the Scales of Fahrenheit, Centigrade and Réaumur... (1845).

In 1832, Taylor married Caroline Cancellor, and together they had one daughter, Edith. The present archive remained in Edith's family, descending to her children. The archive was housed at Thorne Court, Bury St. Edmunds, Edith's marital home, until 2017.

The largest assemblage of Taylor's papers in private hands or institutional collections.