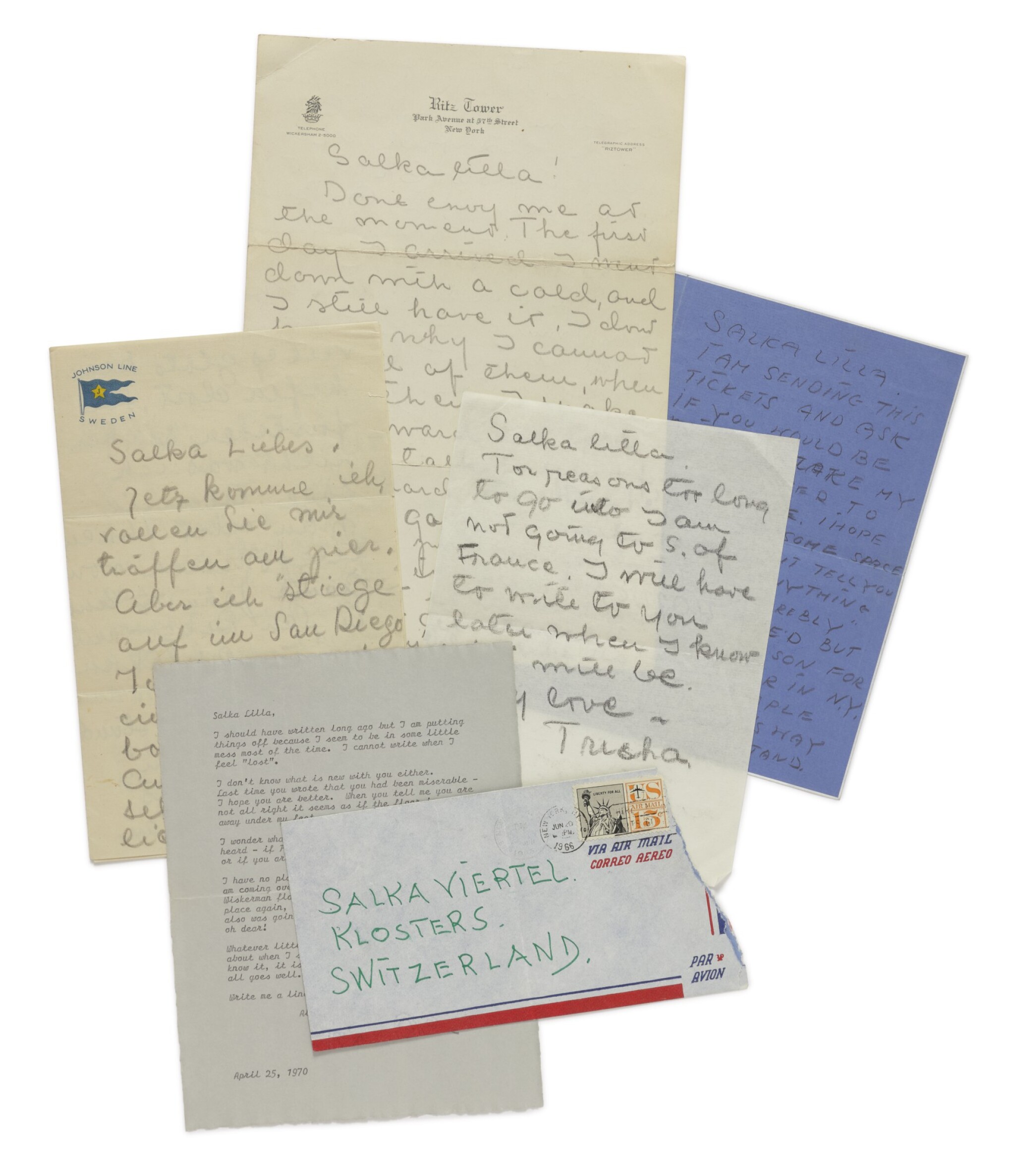 An important collection of letters to Salka Viertel

Greta Garbo's letters to her friend and mentor, Salka Viertel. Viertel (1889–1978) was an emigre actress, screenwriter and hostess to the community of German exiles living and working in Hollywood between the two world wars. She and Garbo were lifelong friends, as these intimate letters demonstrate. She was co-author of three great Garbo films: Queen Christina (1933), Anna Karenina (1935), and Two-Faced Woman (1941).

These letters range in content from professional questions to Garbo's constantly changing travel plans and her worries over her health. Sometime in 1933, Garbo wrote to Viertel in German, complaining that "Europe is dead." "I know I'm an impossible person, but I can't make Christina in Europe. When you are as involved in film as I am, then you'll understand. I know that you're hoping that Christina would be mae in Europe — I'm very sorry Salka, but I'm in a state …." In other letters from the 1930's, she discusses the films Camille and Conquest, Noel Coward, Irving Thalberg, Louis B. Mayer.

Garbo's strong sense of self-pity is candidly on display here. In 1937, she wrote, "I don't know anymore what to do …. I go nowhere, see no one — just like in Brentwood …. Perhaps you will come and resque [sic] me …. It's hard and sad to be alone, but sometimes it's even more difficult to be with someone." Her mania for privacy surfaces in a letter of 19 December 1938: "Please don't tell [George] Cukor where we will meet and ask if he will be silent about my coming if it is not in the newspapers. Let us meet in Pasadena. I will wire 'Meet Bieler' — that means Pasadena,"

In later letters she mentions plans with Gore Vidal and Baroness Cecile de Rothschild. Travel plans are canceled or changed for various reasons: "[I]t would be a mistake to go to Klosters as long as I have this condition. I feel very tired and cannot seem to get myself together to plan where to go. Again, to have to pack and leave seems rather too much …." In an undated letter, she cautions, "Please don't … put my name on the envelope. Because then I will have to leave."

Late 1972 finds Garbo preoccupied with dreams: "Let us not underestimate dreams! Someone sent me a magazine which had pages about dreams. Then I dreamed that a cat bit me. I looked it up for the deviltry of it — It promised troubles and I got them."

The two women's friendship endured for over fifty years. In a telegram dated 28 July 1932, Garbo wrote, "Thank you for everything you have done for me but above all thank Heaven that you exist auf wiederseh[e]n liebe Salka."