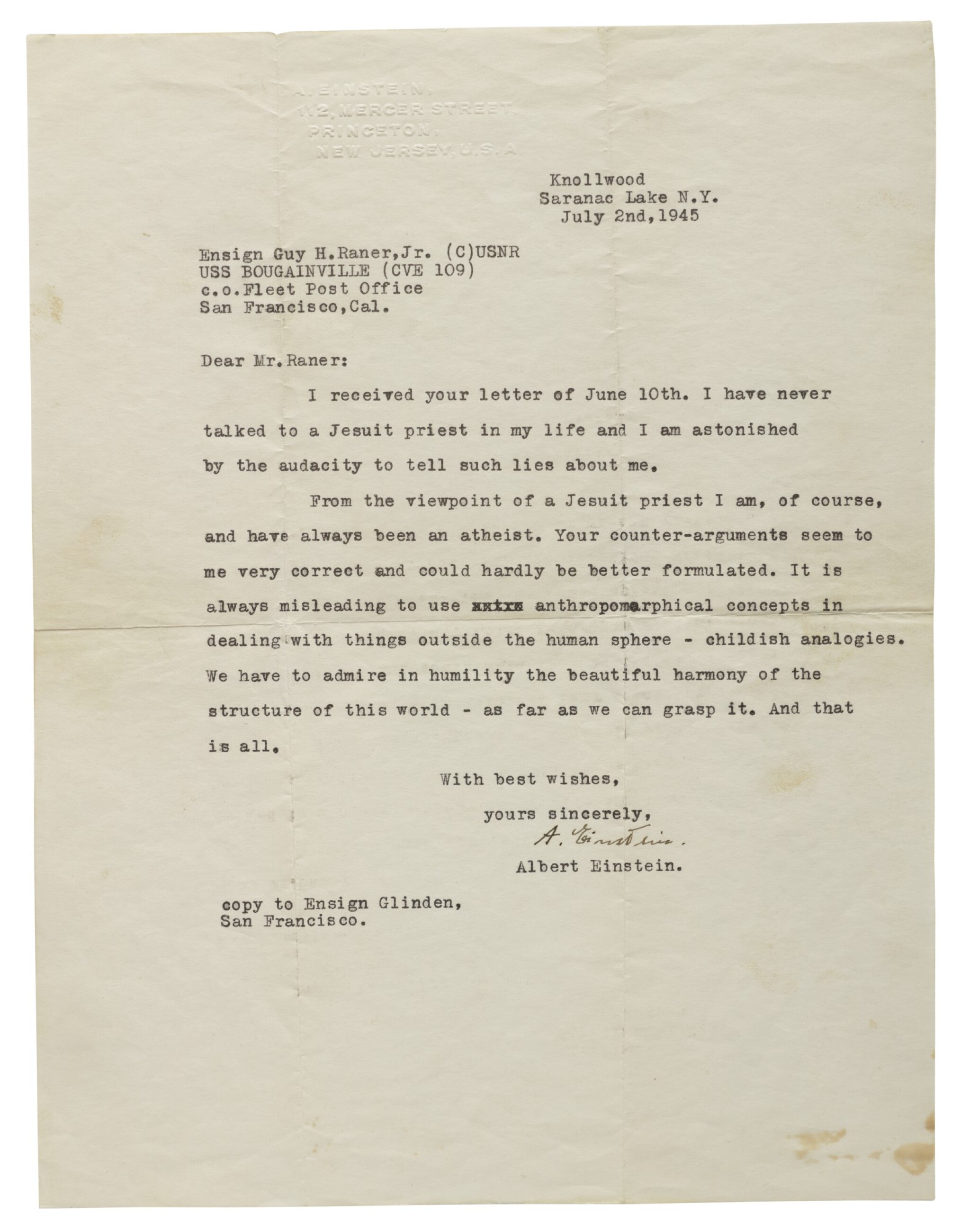 Typed letter signed ("A. Einstein"), to Ensign Guy H. Raner Jr., explaining the nature of his personal atheism and belief in God

One page (11 x 8 1/2 in.; 280 x 215 mm) on bond typing paper with Einstein's embossed Princeton address at head but typed by Einstein himself at Knollwood, Saranac Lake, New York, 2 July 1945, direction for copy to Ensign Glinden, San Francisco, at bottom, accompanied by the original typed envelope addressed to Ensign Raner onboard the USS Bougainville, c/o Fleet Post Office, San Francisco, and with Einstein's name and Saranac Lake address typed on verso; letter with some slight discoloration and minor marginal staining, intersecting central folds reinforced on verso, envelope worn and reinforced at edges and with numerous pencil notations. The consignor has independently obtained a letter of authenticity from PSA that will accompany the lot.

"We have to admire in humility the beautiful harmony of the structure of this world - as far as we can grasp it": a clear and straightforward statement by Einstein, written, in English, to a United States sailor, about his personal religious beliefs, including the existence of God.

As the person popularly thought to have the greatest understanding of the universe, Einstein's views on the nature of God and function of religion were often solicited, and he was frequently misrepresented in the popular press as holding rather conventional Judaeo-Christian beliefs. One person who sought clarification on the matter from the physicist was Guy Raner Jr., a Navy ensign headed to Guam to take up his position as communications officer for the USS Bougainville. On 10 June 1945, Raner wrote to Einstein, describing a conversation he had with another junior officer (Ensign Glinden):

"I had quite a discussion last night with a Jesuit-educated Catholic officer … [in] which he made certain statements regarding you which I tend to doubt. To clear my mind on the subject I would appreciate it a great deal if you would comment on the following points:

"He said that you were once an atheist. Then, said he, you talked with a Jesuit priest who gave you three syllogisms which you were unable to disprove; as a result of that you became a believer in a supreme intellect which governs the universe. The syllogisms were: A design demands a designer; The universe is a design; therefore, there must have been a designer. On that point I questioned the universe being a design; [laws of nature account for observed natural phenomena and the vastness of the universe for its complexity]. Anyway, he said that was enough to convince you of the existence of a supreme governor of the universe. Point two was: 'Laws' of nature … exist; if you have a law you must have a law-giver; the law-giver was God. Sounds like an exercise in semantics to me. …

"He could not remember the third syllogism; however if the story is accurate you probably do. … I would greatly appreciate a short letter clarifying the situation."

Raner's letter clearly resonated with Einstein, who replied promptly with the present letter:

"I received your letter of June 10th. I have never talked to a Jesuit priest in my life and I am astonished by the audacity to tell such lies about me.

"From the viewpoint of a Jesuit priest I am, of course, and have always been an atheist. Your counter-arguments seem to me very correct and could hardly be better formulated. it is always misleading to use anthropomorphical concepts in dealing with things outside the human sphere - childish analogies. We have to admire in humility the beautiful harmony of the structure of this world - as far as we can grasp it. And that is all."

Einstein's letter is widely quoted in biographical studies, as well as in Christopher Hitchens's The Portable Atheist: Essential Readings for the Nonbeliever. As a clear summation of Einstein's personal religious beliefs, including the existence of God, his own closing words could be applied to this letter: "And that is all."