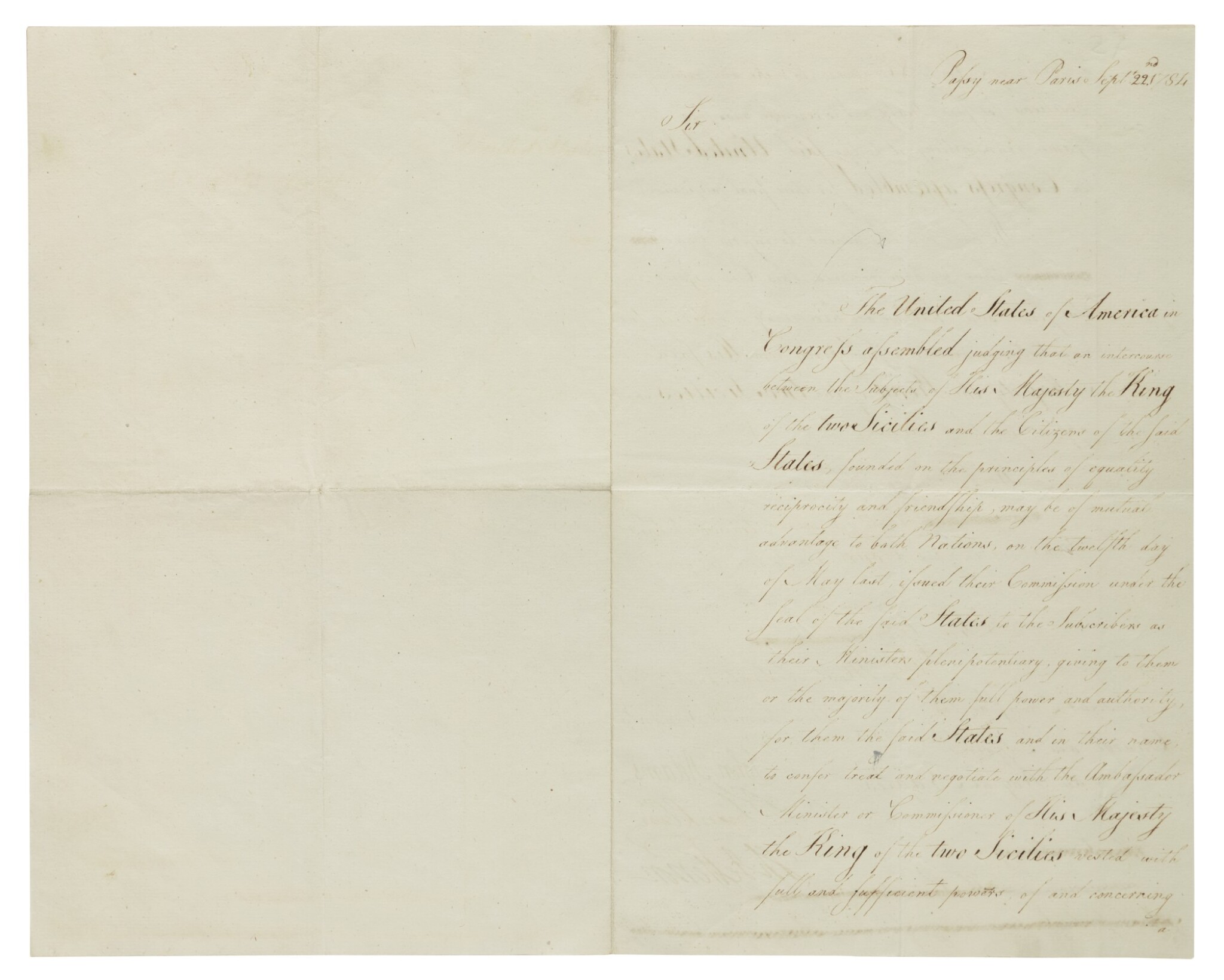 An evocative relic of the Founding Fathers: Franklin, Adams, and Jefferson seek a Treaty of Amity and Commerce "founded on the principles of equality reciprocity and friendship."

When the Confederation Congress appointed Thomas Jefferson, 7 May 1784, to join ministers John Adams and Benjamin Franklin in negotiating treaties of amity and commerce with European nations, the official ratification of the Treaty of Paris ending the American Revolution was less than four months past. Jefferson arrived in Paris in August and found himself reunited with two other members of the committee of five appointed by the Continental Congress to draft a declaration endorsing Virginia delegate Richard Henry Lee's resolution "that these United Colonies are, and of right ought to be, free and independent States. …" While Jefferson was the principal author of the Declaration of Independence, it is evident from their annotations on Jefferson's "Rough Draft" that both John Adams and Benjamin Franklin read and commented on his text, even making relatively small changes. Since there is no direct evidence that the other two members of the committee (Roger Sherman of Connecticut and Robert R. Livingston of New York) made any revisions to the document, the present remarkable document represents a conjunction of the three men most responsible not only for establishing the diplomatic service of the new nation but for establishing the nation itself through the Declaration of Independence.

The Congressional Commission for Negotiating Treaties of Amity and Commerce, issued by the Congress to Adams, Franklin, and Jefferson, 16 May 1784, listed among some twenty courts to be approached by the ministers, "Naples—His Majesty the King of the two Sicilies." The Americans might not have fully understood that at the time the Kingdoms of Naples and Sicily were independent and sovereign states—although they shared a sovereign. Ferdinand ruled the Kingdom of Naples as Ferdinand IV and the Kingdom of Sicily as Ferdinand III.

Following their instructions, Adams, Franklin, and Jefferson evidently first directed their diplomatic overture to the Sicilian Envoy, or Ambassador, Extraordinary. At some point, they thought instead to send the letter to M. de Pio, chargé d'affaires of the King of Naples. The title of the first intended recipient is neatly ruled through at the bottom of the second page and replaced by a direction to de Pio; similarly three evidently honorific designations applicable to the first recipient, but evidently not to de Pio, have also been neatly deleted. The letter itself follows the formula approved by Congress and based on drafts by Charles Thomson and Elbridge Gerry:

"The United States of America in Congress assembled judging that an intercourse between the Subjects of His Majesty the King of the two Sicilies and the Citizens of the said States, founded on the principles of equality reciprocity and friendship, may be of mutual advantage to both Nations, on the twelfth day of May last, issued their commission under the seal of the said States to the the Subscribers as their Ministers plenipotentiary, giving to them or the majority of them full power and authority, for them the said States and in their name to confer treat and negotiate with the Ambassador Minister or Commissioners of His Majesty the King of the two Sicilies vested with full and sufficient powers of and concerning a Treaty of Amity & Commerce, to male and receive propositions for such Treaty and to conclude and sign the same, transmitting it to the said United States in Congress assembled for their final ratification.

"We have now the honour to inform your [deleted] that we have received this Commission in due form, and that we are here ready to enter on the negotiation whenever a full power from His said Majesty the King of the two Sicilies shall appear for that purpose.

"We have further the honour to request of you [deleted] that you would transmit this information to your Court and to be with great respect Sir Your [deleted] Most obedient and Most humble Servants."

De Pio replied to the commissioners on 22 January 1785, in French, thanking them for their offer of friendship. He explained that while the Kingdom of Naples would indeed welcome a friendship with the United States, the Kingdom does not believe it is necessary to formalize the relationship on paper (see De Pio to the American Commissioners, The Papers of Thomas Jefferson, ed. Boyd, 7:612–614). It would not be until 1796—when Franklin was dead, and Adams and Jefferson were rivals for the presidency—that the Kingdom of Naples would formally recognized the United States.

This is likely to be the only opportunity to acquire a single document signed by Franklin, Adams, and Jefferson, particularly one of this historical significance.