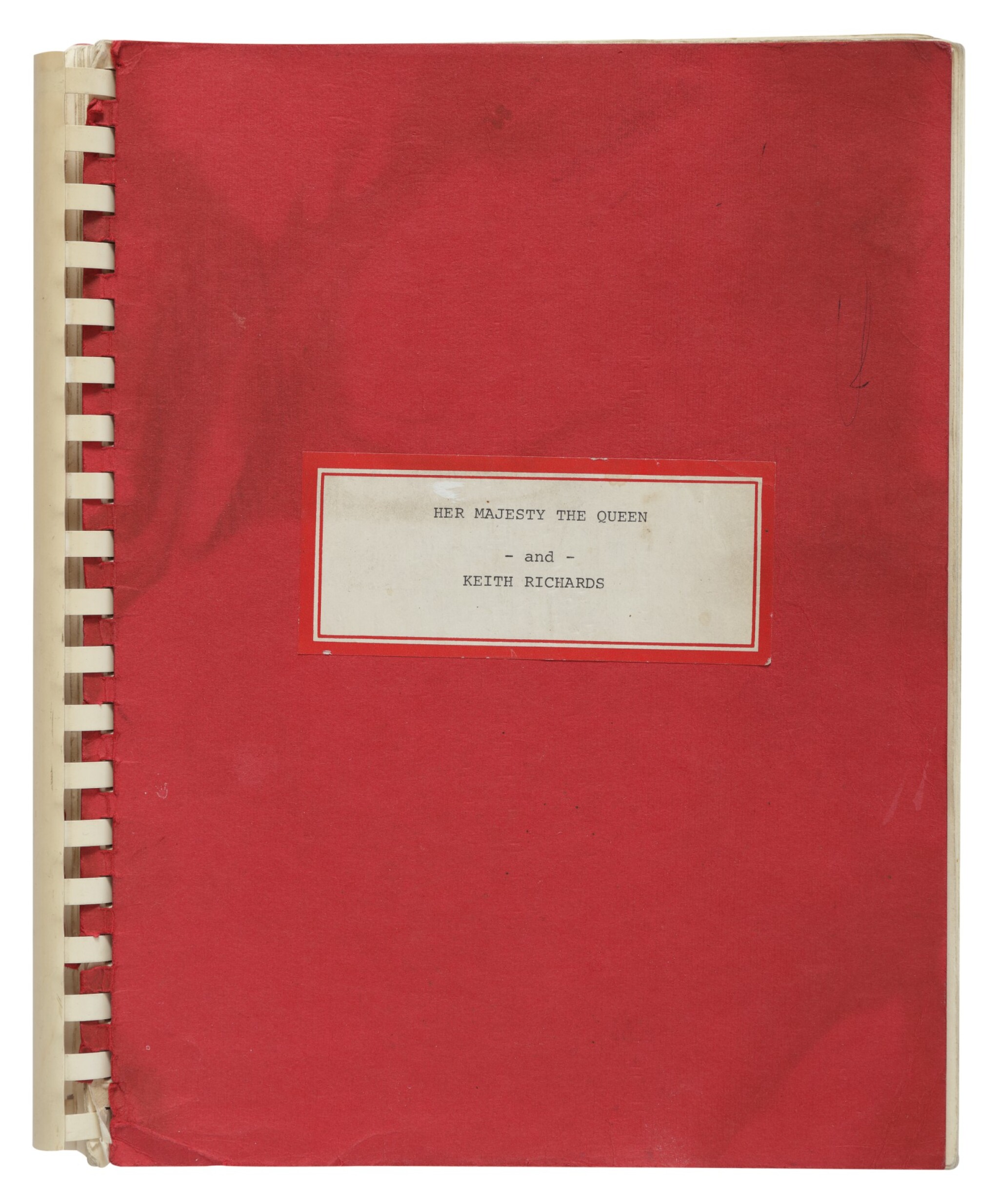 [ii], 93 pp., printed single-sided (280 x 215 mm). Spiral bound, red paper wrappers, printed paper label "Her Majesty the Queen - and - Keith Richard" to cover. Signed and certified on page 93 by the official court reporter. A bit of handling wear, soiling, and light creasing. Accompanied by a photograph of Keith Richards with the court reporter.

"Free Keith!" — an infamous drug bust threatens to derail the Stones at the peak of their success

﻿On February 27th, 1977, while The Rolling Stones were in Toronto for a recording session for their Love You Live album at the Mocambo Club, Canadian police raided Keith Richards and Anita Pallenberg's hotel room and found roughly an ounce of heroin and five grams of cocaine. Police found him in the throws of his addition, and in his memoir, Richards recalled: "They couldn’t wake me. By law you have to be conscious to be arrested... My memory of it is waking up and them going slap, slap, two Mounties dragging me about the room, slapping me. Trying to get me conscious." The quantity was such that the musician was charged with intent to traffic, the penalty for which in Canada ranges from seven years, to life in prison.

Richards secured a special medical visa permitting him to undergo an experimental addiction treatments in the states in advance of the trial, which took place in October of the following year. The present document is a transcript of that pivotal legal proceeding, where Keith Richards appeared in court before Judge Lloyd Graburn to argue that he wasn't a danger to the community, having pled guilty to a lesser charge of possession of heroin, and elected trial by judge alone.

Richard's newfound sobriety was central to his defense. His attorney would go on to contextualize his ongoing struggles with addiction in the context of his creativity, arguing that he found himself in this "terrible predicament" because he was "racked with severe emotional pain." Drawing comparisons to other tortured artists through history, such as Van Gogh and Billie Holiday, his lawyer went on: "one often wonders whether whether its not his oversensitivity to life and to people and to his environment that allows him to see and express in music and writing what most of us are not gifted enough to see ... I suggest to your Honour from the evidence that you've heard that Keith Richard [sic] is a man who, by the pressures of his emotional makeup and the cauldron of the work schedule and into which he's thrown and the pressures of international acclaim, has become so racked that he turned to heroin to help him."

In handing down the sentence, Judge Graburn agreed, deeming: "No incarceration or fine would be appropriate because of Mr. Richards’ continuing treatment for drug addiction and his long-term benefit to the community." As cheers erupted in the courtroom, Richards was given a one-year suspended sentence, one years' probation, and was ordered to give a special performance at the Canadian National Institute for the Blind. There was some speculation that the court's leniency amounted to preferential treatment, but Prosecutor, Paul Kennedy, didn't seem to object: "If you get a member of the Rolling Stones off heroin" he said, "you've done some good."

Keith Richards finally managed to get the monkey off his back following his dust-up with the Mounties, going on to tour with the Stones through some of their most successful and frenzied periods, through to today.