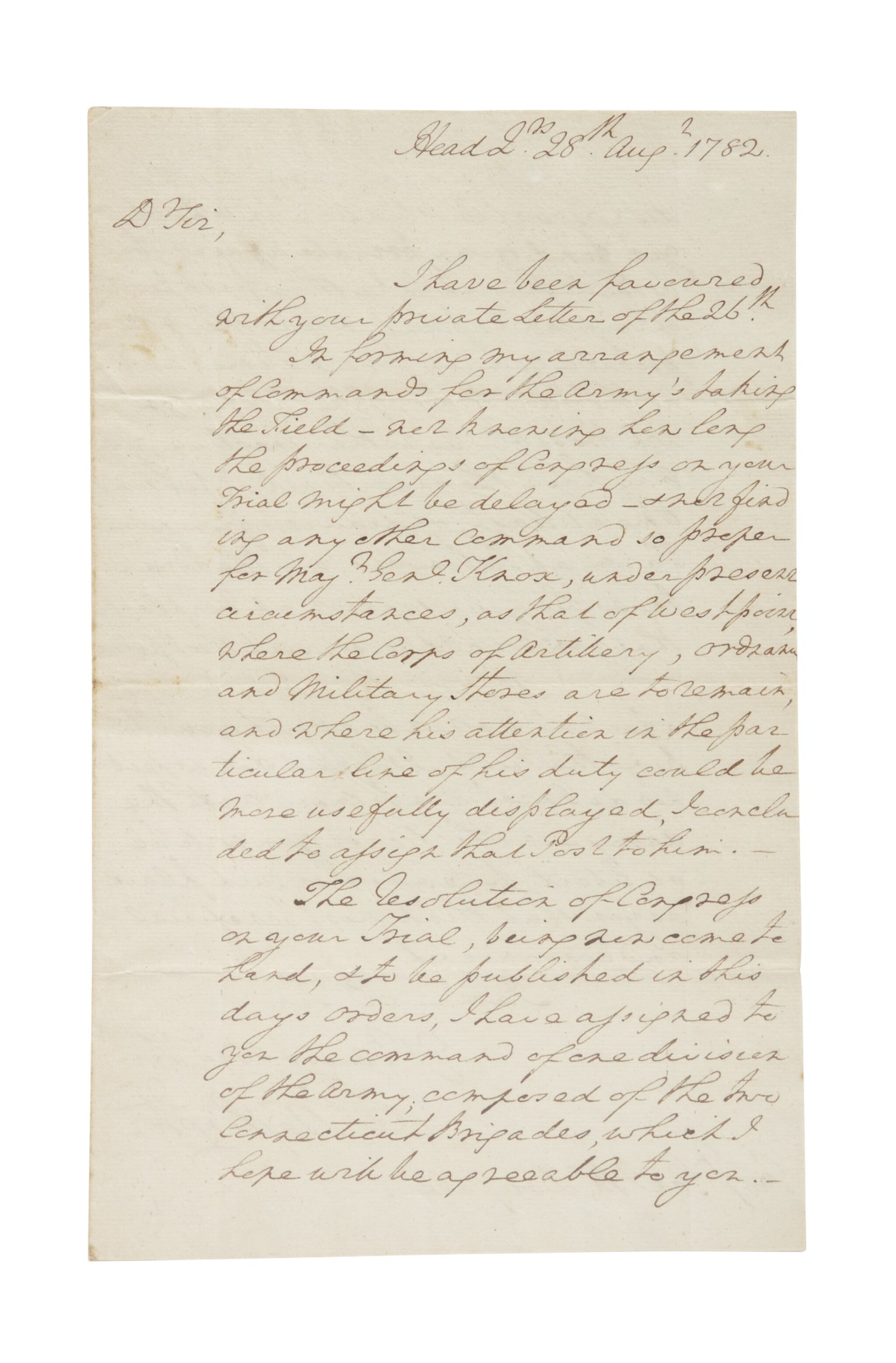 "The Resolution of Congress on your Trial, being now come to hand … I have assigned to you the command of one division of the Army." Washington tactfully announces a change in McDougall's orders following his court martial—and empathizes with his uncertain financial situation. (McDougall had been arrested for insubordination on the order of General William Heath, after years of animosity between the two stemming from a contentious Council of War, 12 September 1776. McDougall was acquitted on all but one minor charge.)

After acknowledging receipt of McDougall's recent letter, Washington explains his decision to replace him as commander of the garrison at West Point: "In forming my arrangement of Commands for the Army’s taking the Field—not knowing how long the proceedings of Congress on your Trial might be delayed—& not finding any other Command so proper for Majr Genl Knox, under present circumstances, as that of West point, where the Corps of Artillery, Ordnance and Military Stores are to remain, and where his attention in the particular line of his duty could be more usefully displayed, I concluded to assign that Post to him." Washington continues, "The Resolution of Congress on your Trial, being now come to hand, & to be published in this days Orders, I have assigned to you the command of one division of the Army; composed of the two Connecticut Brigades, which I hope will be agreeable to you."

On 26 August, McDougall had written Washington a "mortifying" letter, explaining "The non payment of my wages, since I have been a General Officer, (except a very trivial sum) together with my advances for the public; early in the controversy, for the last of which I received continental money have reduced my funds very low … till I am no longer able to support Mrs McDougall at distant quarters, without exposing myself to people, who perhaps would rejoice at the discovery. … To prevent this I removed her to the Post. As the Army is now about taking the field; I am anxious to know, how your Excellency intends to dispose of me when the sentence of the Court Martial is returned from Congress. For I am but ill provided with means or health to take the field."

Washington's very kind response here reflects not only his personal affection for McDougall but also the fact that the military prosecution of the war was effectively concluded. "I am very sorry for the disagreeable situation in which you find your private affairs; but as the Army will take their first position on Verplanks point, where they will probably remain for sometime; and as the operations of the Campaign will probably be rather inactive, you may have the oppertunity, for some time at least, of drawing from your Farm at Robinson’s, all the advantages for your support at Verplanks, that you would receive at West point."

Washington ends the letter by essentially allowing McDougall to chose the place of next service: "If your health is on such a footing as not to admit your taking the Field, I should not expect, nor do I wish you to move with the Army—in which case you will be at liberty to remain in such place as you shall think most beneficial and convenient."

Alexander McDougall died less than four years after receiving the present letter. In the interim, he headed of the committee of army officers who submitted a memorandum to Congress that underpinned the Newburgh Conspiracy; served in the New York State Senate; and was was the first president of both the Bank of New York and the New York Society of the Cincinnati.

Purchased by Mr. Rubinfine, 1992, from W. Wright Hawkes, a descendant of Alexander McDougall.