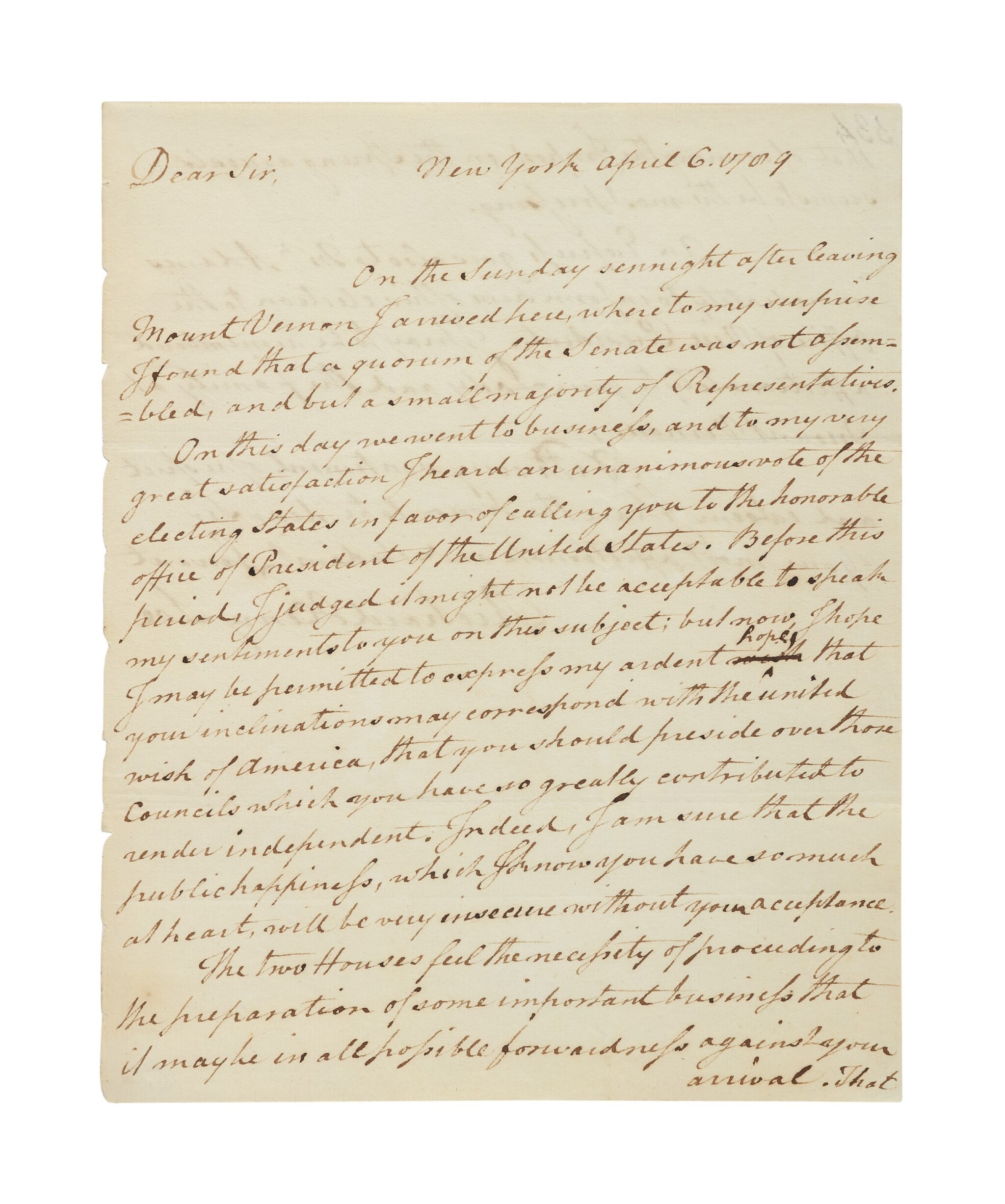 AUTOGRAPH LETTER SIGNED ("RICHARD HENRY LEE") AS A UNITED STATES SENATOR FROM VIRGINIA, TO GEORGE WASHINGTON, INFORMING HIM OF HIS UNANIMOUS ELECTION TO THE PRESIDENCY

Before he was one of Virginia's first federal Senators, Richard Henry Lee was a delegate to the Continental Congress, where, on 6 June 1776, he introduced a resolution that became the germ of the Declaration of Independence: "Resolved, That these United Colonies are, and of right to be, free and independent States, that they are absolved from all allegiance to the British Crown, and that all political connection between them and the State of Great Britain is, and ought to be, totally dissolved. That it is expedient forthwith to take the most effectual measures for forming foreign Alliances. That a plan of confederation be prepared and transmitted to the respective Colonies for their consideration and approbation." It is entirely apposite, therefore, that in this congratulatory missive he acknowledges George Washington's singular contribution to "render independent" the government that he is about to head.

The Articles of Confederation, which had been in effect since 1781, did not provide for a head of state. It was not until the Constitution was ratified that the office of President (and of Vice President) was created. In the election of 1788−1789, states selected Electors by a variety of methods, each of whom cast two votes for two different candidates. The candidate with the highest number of votes became President, with the second-place finisher becoming Vice President. (This system quickly created inevitable policy disagreements within the Executive Branch and was shortly abandoned.)

While there were other candidates for President of the United States—John Adams, John Jay, John Hancock, Robert Harrison, and George Clinton were among those who also received electoral votes—the elevation of George Washington to that office was essentially a foregone conclusion from the time that New Hampshire's ratification of the United States Constitution, 21 June 1788, provided the ninth-state approval necessary to put the new governmental compact into effect. Washington's ambivalence about becoming the chief executive is well known, but it was belied by his willingness to serve. Indeed, the very office of presidency, as constituted, owes much to the character of Washington. His fame as the steady hero of the Revolution, his manifest lack of personal ambition, and his determination not to profit from public service won him a reputation unapproached by any other American of his day.

When the results of the Electoral College were tallied, Washington had secured a vote from every elector, and his fellow Virginian, Richard Henry Lee, hurriedly sent him this letter with the news:

"On the Sunday sennight after leaving Mount Vernon I arrived here, where to my surprise I found that a quorum of the Senate was not assembled, and but a small majority of Representatives.

"On this day we went to business, and to my very great satisfaction I heard an unanimous vote of the electing States in favor of calling you to the honorable office of President of the United States. Before this period, I judged it might not be acceptable to speak my sentiments to you on this subject; but now, I hope I may be permitted to express my ardent ["wish" ruled through] hope, that your inclinations may correspond with the united wish of America, that you should preside over those Councils which you have so greatly contributed to render independent. Indeed, I am sure that the public happiness, which I know you have so much at heart, will be very insecure without your acceptance.

"The two Houses feel the necessity of proceeding to the preparation of some important business that it may be in all possible forwardness against your arrival. That of securing the Impost on the Spring arrivals seems to be the most pressing."

Before closing with the wish to he be remembered to Mrs. Washington and the rest of the family at Mount Vernon, Lee informs Washington who will be joining him in the Executive Offices: "An Express goes also to Mr. Adams immediately to inform him of his election to the Office of Vice President."

A superb letter of the greatest historical consequence.