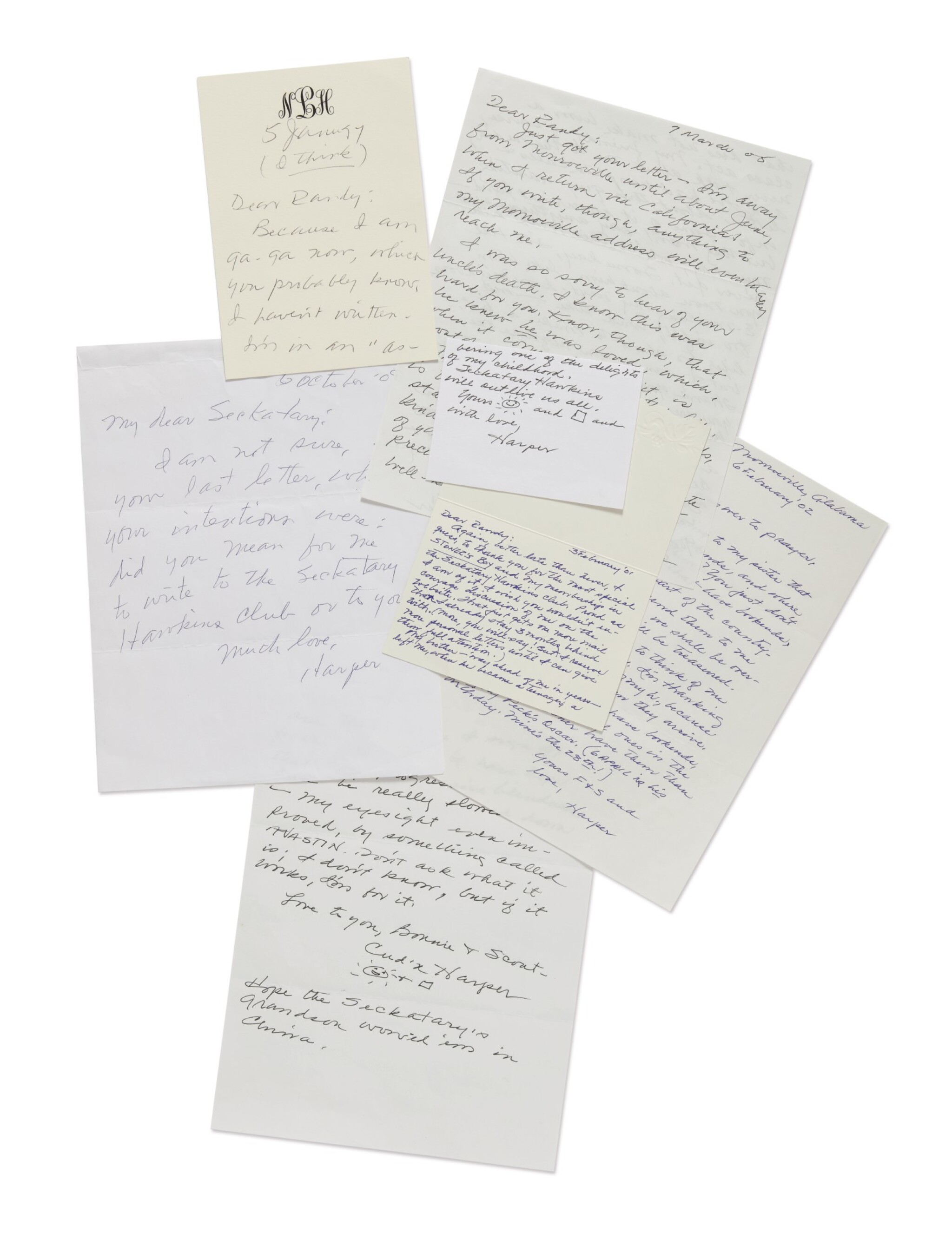 GROUP OF AUTOGRAPH LETTERS SIGNED TO AND CONCERNING ROBERT F. SCHULKERS, WITH A COPY OF TO KILL A MOCKINGBIRD, INSCRIBED BY LEE

28 autograph letters, notes, and cards signed ("Harper"; "Harper Lee"; "Cud'n Harper"), totalling 44 pages (various pages), 25 accompanied by their original envelopes, mostly written from Monroeville, Alabama, 24 August 2000–14 October 2009, to Randy Schulkers, many signed with pictogram for "fair and square"; accompanied by a printed copy of 1999 email annotated and signed by Lee, as well as by two typed transcripts of excerpts from To Kill a Mockingbird signed by her. [With:] To Kill a Mockingbird. Philadelphia & New York: J.B. Lippincott Company, 1960. 8vo. Some toning. Publisher's paper-covered boards, spine gilt-lettered, inscribed by Lee on the front free endpaper, dustjacket present.

Yours on the fair and square. In 1999, Randy Schulkers contacted Harper Lee to ask permission to reference her on a website he was launching about his grandfather, Robert F. Schulkers, and his series of Seckatary Hawkins adventure books. Lee not only gave her assent but began a long-lasting correspondence, focused on the books and the lasting impression they had made on her. On 3 February 2001, Lee writes to thank Schulkers for giving her a membership in the Seckatary Hawkins Club, but stating, "Proud as I am of it, I wish you wouldn't encourage discussion of me on the website, That just gets me more mail than I already stay 3 months behind with. … My brother—way ahead of me in years —left me, when he became a teenager, a rather stunning collection of adventures books, etc.—nearly all the Seckatary pseudonyms, for instance—but my favorites were The Gray Ghost and Stoner's Boy, quite different from the Rover Boys."

Lee sent another thank you letter on 6 February 2002, in response to the gift of a set of Seckatary Hawkins-themed set of bookends: "I'm thanking you … from the b. of my h. … We will not only have bookends, but the most special ones in the world. I'd rather have them than Gregory Peck's Oscar." In a subsequent letter, 20 August 2002, Lee reports that "the Seckatary … and his clone are now on my bookshelves guarding my most precious volumes, among them being several of his creator's."

The correspondence takes a more serious turn, 7 March 2005, when Lee asks Schulkers not to cooperate with a biographer. "My 'biographer,' Charles Shields, is bad news. He's more like a stalker. If you would be so kind as not to give him a minute of your day, I will greatly appreciate it. He may be a well-known biographer, but that doe not make him a class act. My friends, of course, never talk about me to the media. … Thank you for being the gentleman you are, for letting me know about him." In a 23 April letter Lee returns to this topic: "Be warned—a real creep has written a 'biography' of me—so little of it is true that it's worthless, but he'll make millions. It'll be out in May, I'm told, I've seen the proofs & … I didn't recognize my own parents."

A letter of 15 July 2003 discusses their common Thomas Jefferson heritage, and Lee warns Schulkers that now that he has moved to Virginia he will find "about 73,000 other people of similar lineage." At this point, the correspondence becomes more sporadic, but just as warm, and Lee writes increasingly about her age and health. She explains the infrequency of her letters, with characteristic humor, on 5 January 2009. "Because I am ga-ga now, which you probably know, I haven't written, I'm in an 'assisted living' place where they assist me to live. I'm just about blind—reading machine, etc.—but can hear perfectly well—on one side! Other than that, it's Hebrews 13.8." (The Bible verse Lee cites reads "Jesus Christ the same yesterday, and to day, and for ever.") The later letters also touch further on genealogy and family history.

But, in fact, 2009 brought a flurry of letters and notes—more than a dozen—mostly brief humorous quips" "Since nothing happens here, it is obvious that I have nothing to say, so I'll hush!"; "A bunch of people arrived in town … and made straight for me. That's the idea: 'Come to Monroeville to look at Harper Lee'"; "Remember that life depends on the liver." The correspondence ends with a note from 14 October 2009.