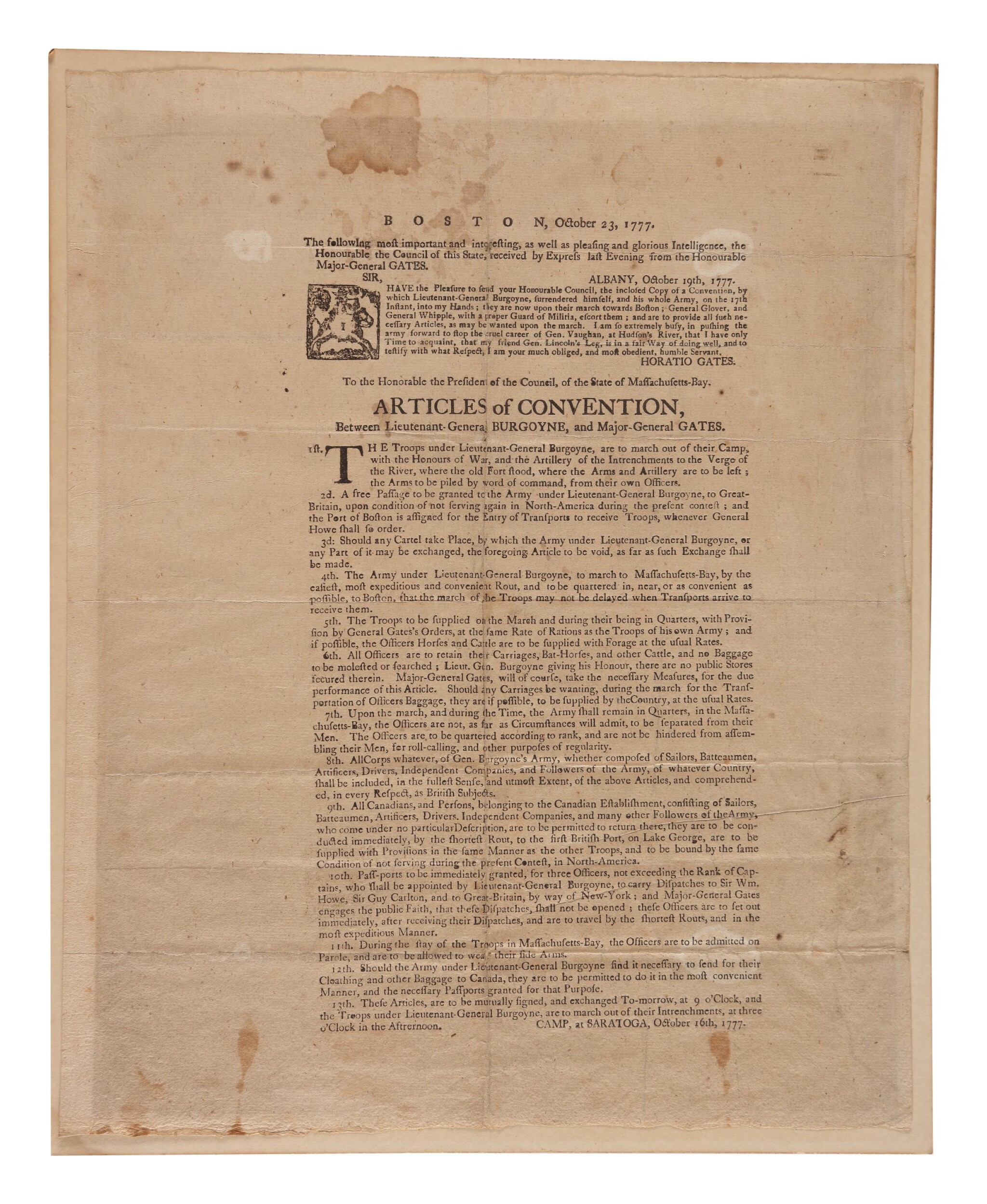 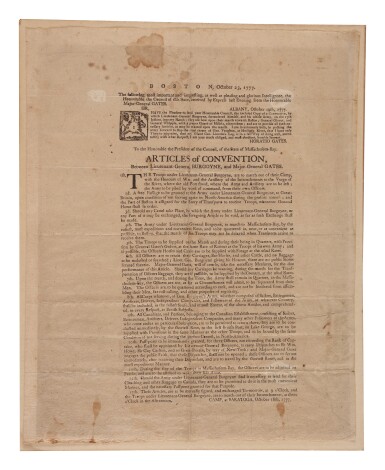 BOSTON, OCTOBER 23, 1777. THE FOLLOWING MOST IMPORTANT AND INTERESTING, AS WELL AS PLEASING AND GLORIOUS INTELLIGENCE, THE HONOURABLE THE COUNCIL OF THIS STATE, RECEIVED BY EXPRESS LAST EVENING FROM THE HONOURABLE MAJOR-GENERAL GATES. BOSTON: [JOHN GILL?], 1777

Letterpress broadside (16 7/8 x 13 1/2 in.; 428 x 342 mm) on a sheet laid paper, woodcut ornamental initial, docket on verso "Articles of the Convention with Burgoin"; hinged to a mat, browned, a few stains chiefly marginal, a few tiny holes at intersecting folds.

The Battles of Saratoga lasted for several weeks in the early autumn of 1777, with numerous encounters between Continental troops led by General Horatio Gates and British regulars, loyalist militia, and Hessian mercenaries invading from Canada under the command of General John Burgoyne. The resulting American victory, which saw Burgoyne surrender his entire army on 17 October, was, as Edmund Morgan wrote in The Birth of the Republic, "a great turning point of the war because it won for Americans the foreign assistance which was the last element needed for victory."

In the terms of surrender they negotiated, Gates and Burgoyne agreed to a "convention," under which Burgoyne's troops could return to Europe after pledging that they would not return to fight against the American cause. The Continental Congress, however, repudiated the convention and the prisoners were held in various internment camps until the end of the war.

In present broadside, the text of the "Articles of Confederation" is preceding by the text of Gates's explanatory cover letter to the Massachusetts Council, dated from Albany, 19 October 1777: "I have the Pleasure to send your Honourable Council, the inclosed Copy of a Convention, by which Lieutenant-General Burgoyne, surrendered himself, and his whole Army, on the 17th Instant, into my Hands; they are now upon their march towards Boston; General Glover, and General Whipple, with a proper Guard of Militia, escort them; and are to provide all such necessary Articles, as may be wanted upon the march. I am so extremely busy, in pushing the army forward to stop the cruel career of Gen. Vaughan, at Hudson's River, that I have only Time to acquaint, that my friend Gen. Lincoln's Leg is in a fair way of doing well. …"

There follows the thirteen articles of the convention, of which the second was the most significant: "A free Passage to be granted to the Army under Lieutenant-General Burgoyne, to Great-Britain, on condition of not serving again in North-America during the present contest; and the Port of Boston is assigned for the Entry of Transports to receive Troops, whenever General Howe shall so order."

Very rare; this is evidently the first copy to appear at auction in more than a century. The last copy we can trace was sold at Scott & O’Shaughnessy, New York, 14 May 1918, lot 25.