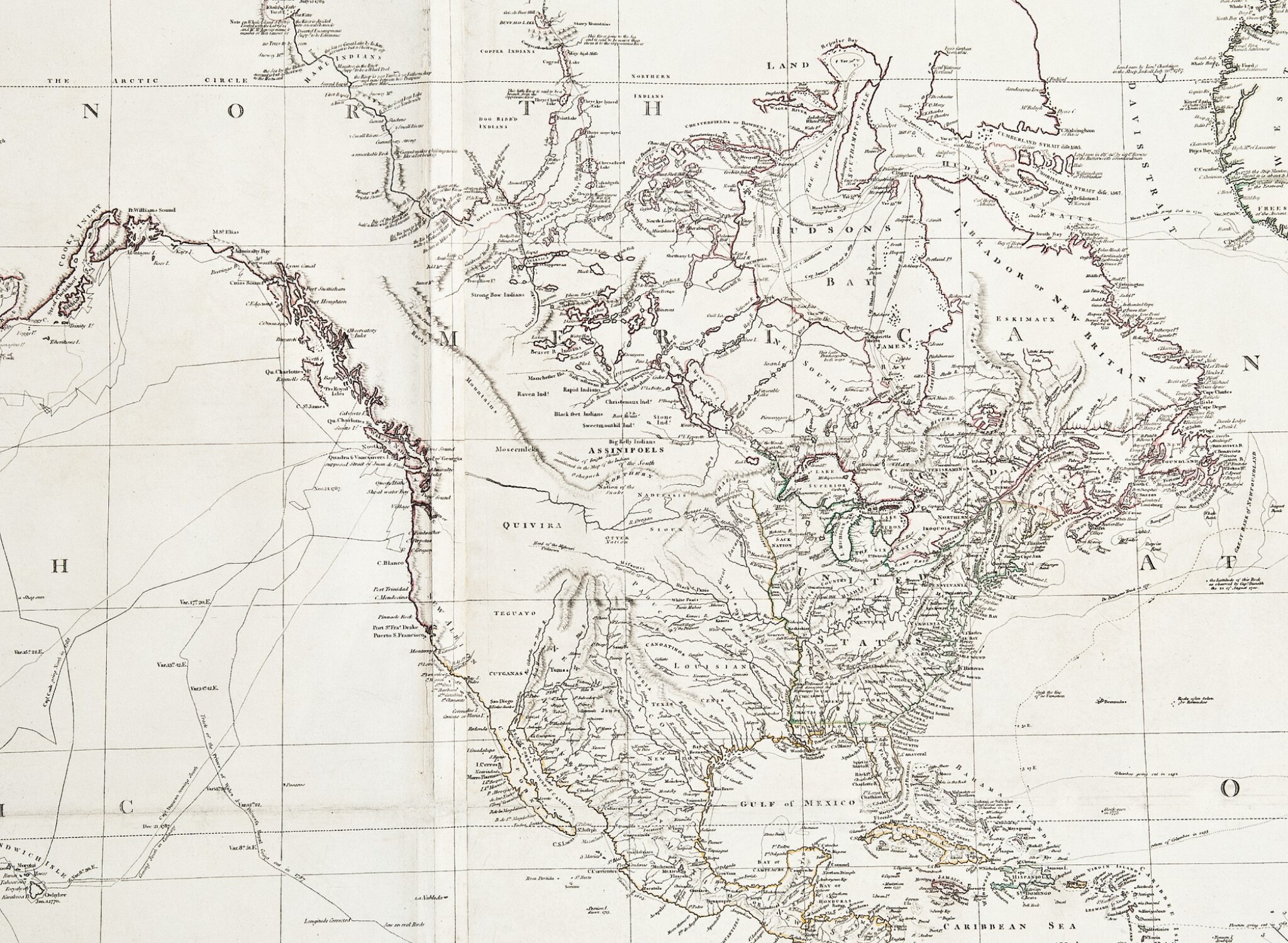 CHART OF THE WORLD ON MERCATOR'S PROJECTION EXHIBITING ALL THE NEW DISCOVERIES TO THE PRESENT TIME: WITH THE TRACKS OF THE MOST DISTINGUISHED NAVIGATORS SINCE THE YEAR 1700, CAREFULLY COLLECTED FROM THE BEST CHARTS, MAPS, VOYAGES &C. EXTANT...AND REGULATED FROM THE ACCURATE ASTRONOMICAL OBSERVATIONS, MADE IN THREE VOYAGES PERFORM'D UNDER THE COMMAND OF CAPT. JAMES COOK. LONDON: A. ARROWSMITH, NO. 24 RATHBONE PLACE, 1 APRIL 1790 [CIRCA 1799]

The best world map published at the end of the 18th century, incorporating all of the discoveries made on Cook's great voyages, exhibiting new discoveries in the Pacific, as well as in the Arctic and along the northwest coast of America.

Aaron Arrowsmith was the founder of one of the leading London map publishing houses in the early part of the nineteenth century. He came to London about 1770 from Durham, his birthplace, and worked as an assistant to William Faden and as a surveyor for John Cary for whom he carried out some of the road surveys which subsequently appeared in Cary's Travellers' Companion. In 1790, Arrowsmith set up his own business in Long Acre and soon established an international reputation. "Aaron Arrowsmith, Hydrographer to the King of England and Geographer to the Prince of Wales, was the most influential and respected map publisher of the first quarter of the nineteenth century...His role in cartographic production was to gather the best information available from a wide variety of sources, weigh the relative merits of conflicting data, and compile from this the most accurate depiction possible of an area. Arrowsmith accomplished this synthesis better than any other commercial map maker of his day and, as a result, his maps were the most sought after and highly prized on three continents" (Martin & Martin, p. 113). Arrowsmith specialized in monumental multi-sheet maps. These were generally separately issued and are now very scarce.

When published in 1790, this map was not only Arrowsmith's first map, but also the first separately-issued English world map to show Cook's discoveries from all three of his voyages. While a seminal piece for any Cook collection, the map incorporates many other Pacific voyages. Indeed, nearly 30 tracks of explorers are marked, dating from 1492 to 1787, including the voyages of Furneaux, Surville, Tasman, Chirikof, Bering and others. "Clarity and accuracy were [Arrowsmith's] aims—and he achieved them as no English cartographer was able to before him. His maps are still essential to historians who want to delve into the history of the 18th-century exploration of the Pacific" (Bricker, Landmarks of Mapmaking p. 98).

Arrowsmith did a remarkable job, as the title suggests, synthesizing information from the most recent explorations. This included the most up to date information from voyages to the Northwest coast of America, as well as the Arctic. Regarding the former, Arrowsmith consulted the works of Meares, Portlock, Dixon and Duncan. Early issues of the map show the northwest coast as per those discoveries. However, on the present issue, Arrowsmith has corrected the mapping of the region around Queen Charlotte Islands to conform to Vancouver's discoveries and removed the references to Duncan. The present circa 1799 issue is the first issue to incorporate those important discoveries. In the Arctic, Arrowsmith further displays his use of the most recent discoveries, incorporating information from Alexander MacKenzie's 1787-89 expedition. This information, as a 4-line note on the map attests, was derived from Mackenzie's own manuscript journal and pre-dates the 1801 publication of Mackenzie's Voyage.

The present example of the map appears to be an unrecorded state. Stevens and Tree cite 7 issues of the map published between 1790 and 1808, largely dated based on Arrowsmith's address in the imprint. Arrowsmith's move to Rathbone Place has not been firmly dated, with some sources suggesting it to be as early as 1796 and others as late as 1802 (this latter date clearly being incorrect as contemporary ads by Arrowsmith and reviews of his maps show his address as Rathbone Place by 1801). The present map is on wove paper watermarked 1799, suggesting the year of publication for this issue. The present copy conforms cartographically with Stevens's and Tree's fourth issue (i.e. with a 1794 dated note concerning the discovery of Wake Island in the Pacific, a 4-line note concerning McKenzie's discoveries in the Arctic and with Van Dieman's Land connected to the mainland), but with the imprint of their sixth issue. (It would appear that what Stevens and Tree cite as the fifth issue is actually a unique copy of the fourth issue, with additions as per the sixth issue comprised of an overlay showing Van Dieman's land). All issues of this separately-issued map are rare.