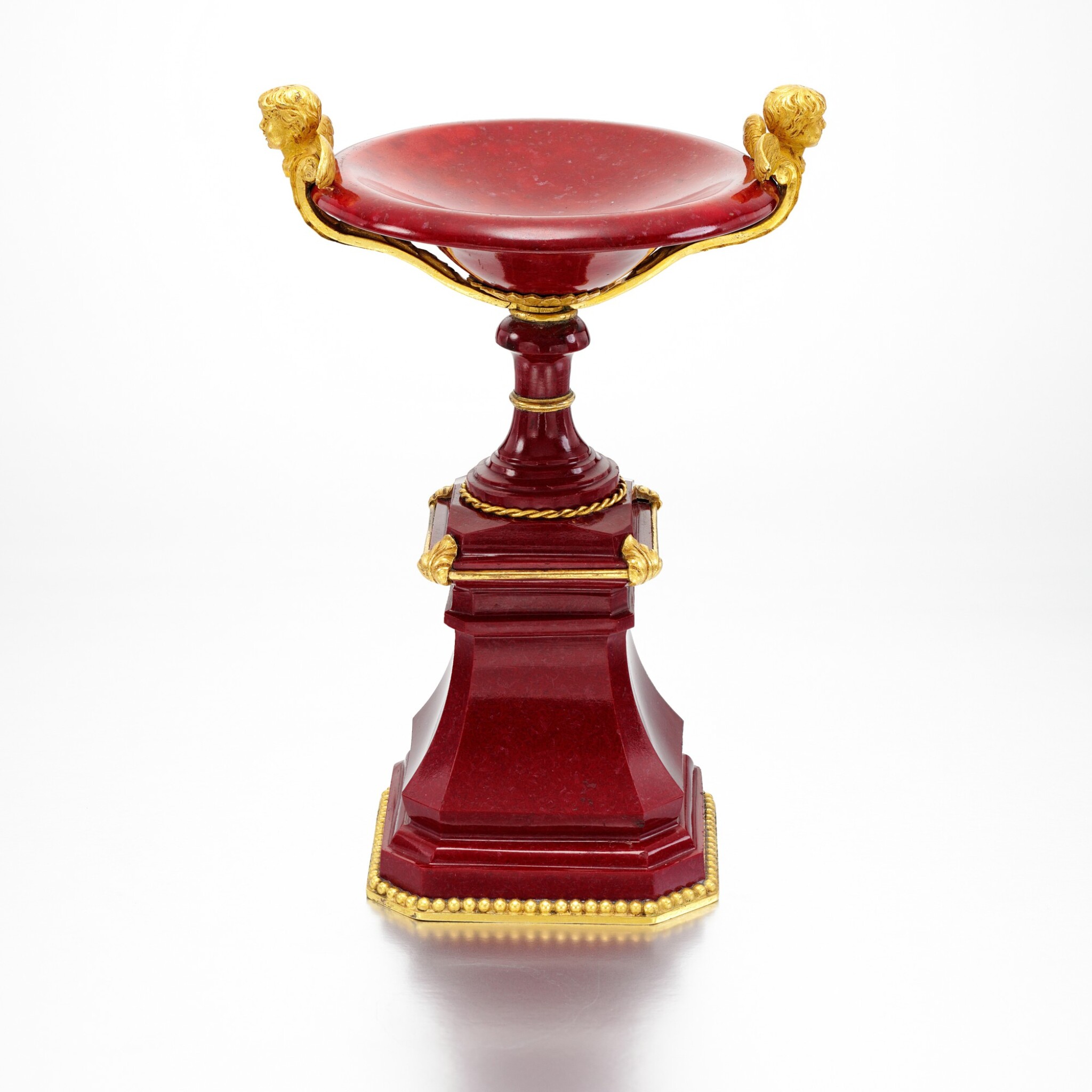 The waisted purpurine tazza mounted in Neoclassical ormolu mounts culminating in two cherub masks, inscribedFabergé in Cyrillic on the mount; in a fitted leather and silk A La Vieille Russie case labelled 'RARE PURPURINE TAZZA with ormolu mounts by Carl Fabergé. This sang-de-boeuf material was the invention of PETOUCHOV while working in the Imperial Russian Glass Factory. This carving was carried out for Fabergé in the workshop of KARL WOERFFEL'

A La Vieille Russie, New York
Helen Babbott Sanders, acquired from the above
The Brooklyn Museum, New York, bequest from the above in 1983
Houston, Museum of Natural Science, The World of Fabergé: Russian Gems and Jewels, February 11 - July 10, 1994

This tazza is an impressively large and commanding use of Russian purpurin. A rare form of glass, purpurine was used in a select number of works by Fabergé and was described by Henry Bainbridge, manager of Fabergé's London branch, as:

‘And there is another substance, the work of man, not nature, but none the worse for that, at any rate from the point of rarity, for its creator is dead and it can never be made again as his secret died with him. I refer to the vitreous substance called purpurine. It was the invention of a workman called Petouchoff of the Imperial Glass Factory in St. Petersburg. The material has much the nature of obsidian, is of that wonderful red colour named by the French sang de boeuf, and is very heavy, having gold in its composition.’ (H.Bainbridge, Peter Carl Fabergé: His Life and Works, London, 1949, p. 54)

To ensure the quality of materials, the execution of Fabergé hardstones designs was often outsourced to specialist lapidaries such as the workshop of Karl Wörffel.

Wörffel had one of the largest and finest stone cutting and bronze casting factories in St. Petersburg and was one of the main suppliers of nephrite, jasper, rhodonite, bowenite and other naturally occurring gemstone materials, leading it to be acquired by Fabergé in 1915. The firm sourced and expertly cut stones from the Caucasus, Ural and Altai mountains and regularly supplied Fabergé with hardstone animals, flowers, figures and sculptural objects such as the present tazza.

The design of this tazza is very similar to that of an ormolu-mounted purpurine and nephrite model that was included in the Paris Exposition Universelle in 1867. The two works share figural ormolu mounts to purpurine tazze and twisted ropework borders. The Paris Exposition Universelle was the first documented use of purpurine in decorative objects and included six entries from the Imperial Glassworks, for which the firm was awarded gold medal status