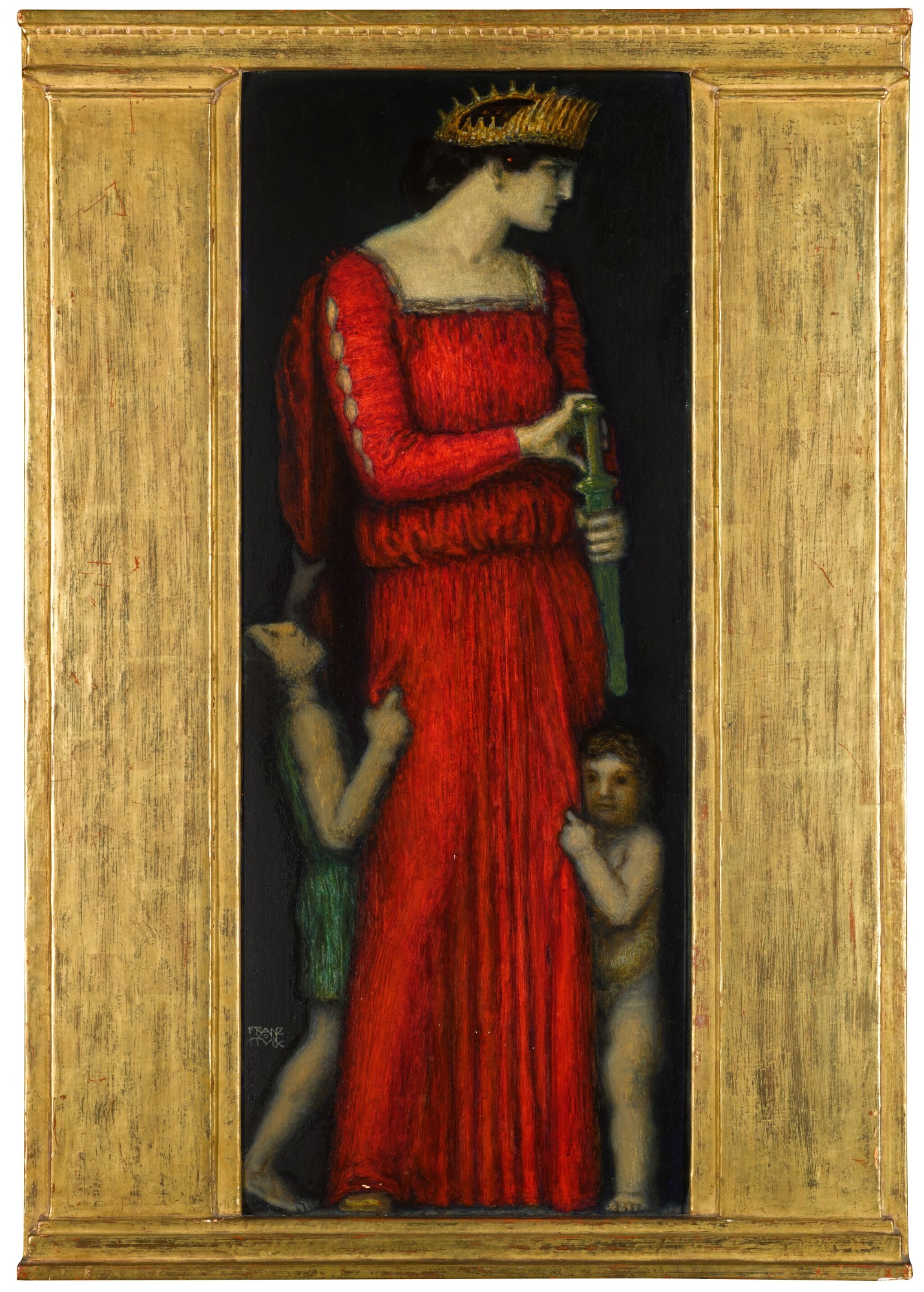 oil on panel, in the original 'Franz von Stuck' frame made by Georg Oberndorfer

The authenticity of this work has been confirmed by Albert Ritthaler.

This painting is in good condition.

The panel is flat and even. On the reverse, in the centre of the lower edge, a 5cm vertical hairline crack is visible however this does not appear to be visible on the front of the work. There is a small spot of paint flaking just above Medea's right foot and a couple of other tiny spots. Under ultra-violet light the artist's pigments and typical use of glazes give the work a somewhat uneven appearance, however there do not appear to be any notable retouchings.

The panel and frame are stamped 'George Oberndorfer Kunstischlerei, Munchen' on the reverse

In Greek mythology, Medea was an enchantress who helped Jason, leader of the Argonauts, to obtain the Golden Fleece from her father, King Aeëtes of Colchis. Euripides’ play takes up the story at a later stage, when the couple live in Corinth, and Jason deserts Medea for the daughter of King Creon of Corinth; in revenge, Medea murders her two sons by Jason as well as Creon and his daughter.

Stuck, influenced by the texts of Sigmund Freud, used Greek myth as a vehicle on to which to transpose his preoccupation – one he shared with other fin de siècle Symbolist artists including Gustave Moreau, Félicien Rops and Fernand Khnopff - with the idea of woman as femme fatale: dangerous, independent and predatory. This is probably most obvious in his depictions of the sphinx, however the subtext is very much present in this painting.

From 1878 to 1881 Stuck attended the Kunstgewerbeschule in Munich. From 1881 to 1885 he studied at the Munich Akademie, where he was taught by Wilhelm Lindenschmit and Ferdinand Löfftz. During his student years he made notable contributions to the humorous Munich periodical Fliegende Blätter and to the Viennese serial publications Allegorien und Embleme and Karten und Vignetten. These did much to establish his reputation as both a skilled and a witty draughtsman.

During the 1890s Stuck was both at the forefront of the avant-garde and an establishment figure in Munich art circles: in 1892 he was one of the founders of the Munich Secession, and in 1895 a member of the new artists’ association Pan, which published a journal of the same name. Works by Stuck such as his allegorical painting Sin provoked an outcry when exhibited. From 1893, however, he taught at the Munich Akademie, and in 1894 he became a member of the state commission charged with buying contemporary works at Munich exhibitions.

A significant element with a great many of Stuck’s paintings was his provision of specially designed frames, often inscribed with the work’s title and serving to link the image with its surroundings as part of a decorative whole. A concern for the matching of art and setting led Stuck to build a large villa for himself in Munich (1897–8), now a museum, for which he provided architectural plans and designs for both decoration and furniture.