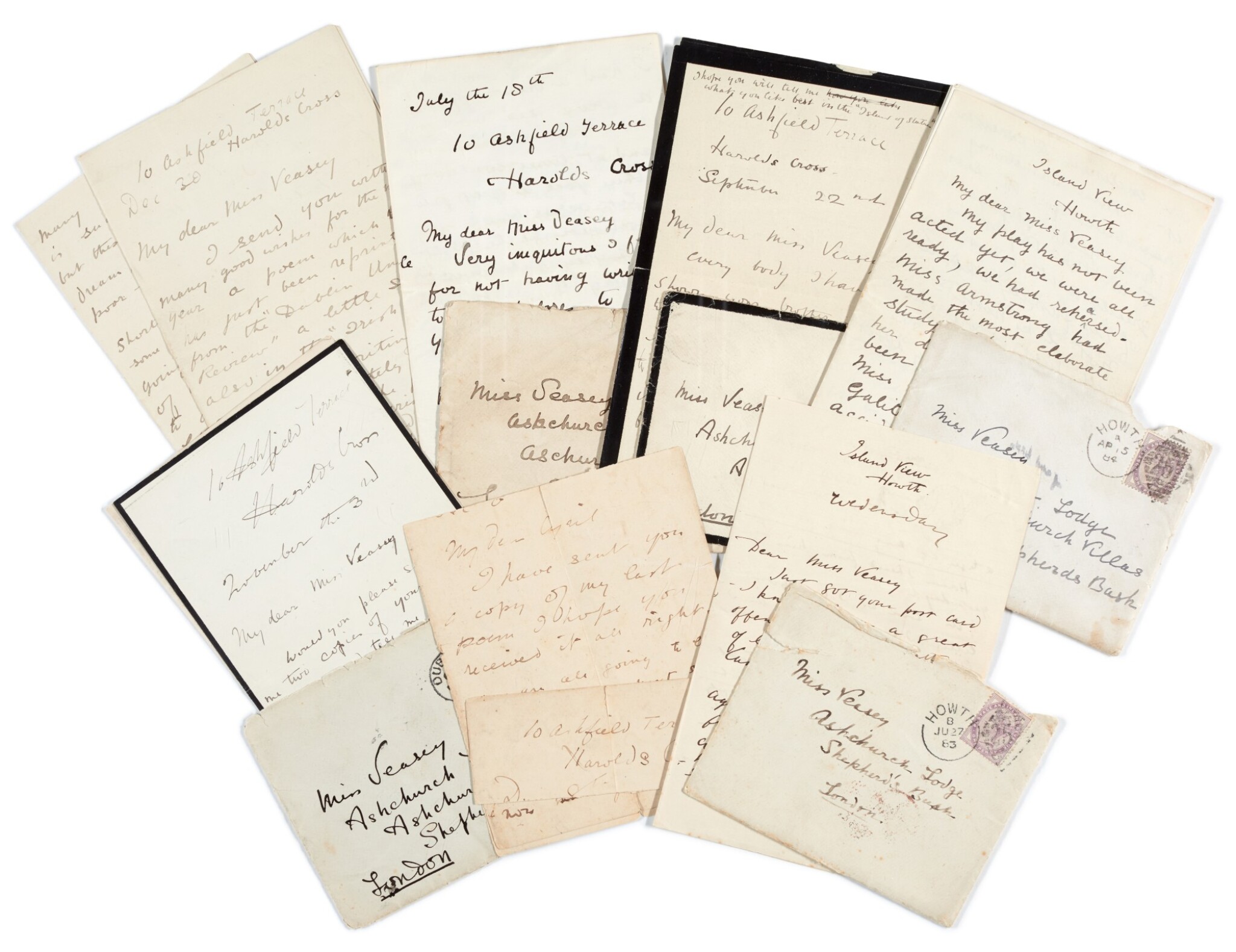 writing about his own earliest plays and poems and the beginnings of his literary career ("...The blue stockings of Dublin have been so good as to approve of the 'Island of Statues' I am sure I am very grateful to them and try hard to think them the shepherdesses of our modern arcadia but they have heads like withered apples and hearts like bitter almonds...", the earliest letter with two pen and ink sketches (one an encounter between Cyril Veasey and a tiger, the other showing four hunters shooting at a single duck and captioned "game is scarce"), 44 pages, 8vo, the final two letters on mourning stationery, with five autograph envelopes, Island View, Howth, and 10 Ashfield Terrace, Harold's Cross, Dublin, 27 July 1883 (undated but with postmarked envelope) to 30 December [1885]

and one letter to her brother Cyril Veasey, hoping that he has received Yeats's poem, explaining that the Yeats family will have moved to London when Veasey returns from India, his life in Dublin ("...We go to literary evenings ... at the houses of the 'King of the Orangemen' and the 'head centre of the Fenians' - so you see we are not bigoted..."), and describing winter in Dublin, 4 pages, 8vo, 10 Ashfield Terrace, Harold's Cross, Dublin, 8 December [1885]

THE BIRTH OF A POET: AN EXCEPTIONAL AND UNKNOWN SERIES OF LETTERS BY THE YOUNG YEATS.

Ethel Mary Veasey (1863-1905) was the elder sister of Harley Cyril Veasey (1865-1926). Cyril had been a close friend of Yeats at Godolphin School in Hammersmith, whilst Ethel had befriended Lolly Yeats. They kept up their friendship after the Yeats family returned to Ireland. In the first letter, written soon after Cyril had departed for a career in India, Yeats writes of his love for natural history, an enthusiasm shared with the Veasey family, and recommends the writer Grant Allen ("his books have an essence like smells of the fields"). He also responds to a question from Ethel about his writing, admitting that he writing poetry but "none that I am at all satisfied with". He thus introduces the subject that dominates the subsequent correspondence.

The remaining five letters, written between April 1884 and December 1885, contain far fewer references to the natural world - although one letter contains fascinating thoughts on landscape that conclude with his yearning (some three years before 'The Lake Isle of Innisfree') for "once acre of green wood willed with the hum of insects." Instead, they provide a precious glimpse of Yeats's development as he entered the world of letters and began to strike the pose of the poet. In April 1884 he discusses 'Time and the Witch Vivien', his earliest verse drama, at some length, giving a summary of the plot as well as an explanation of its origin at a Christmas fancy dress ball, and then explaining that "I finished it yesterday I begin today a new play I am also in the middle of a prose romance called The Island of many flowers".

Later letters update Ethel on his latest literary works - whether it be another new play ("...there is a wizard in it...") or the appearance of his first poems in Dublin's literary magazines. In September 1885 he writes of his literary ambitions and fear that he will not fulfil his potential ("...I am so much given to celtic brooding and dreamy indolence..."), but by December that year he is able to report that he is writing both prose and poetry ("...The prose (articles on the Irish poets) to raise the wind, verse for a book I hope to publish before long...").

The letters also give a sustained insight into Yeats's changing circumstances over these crucial Dublin years. On 18 July 1884 he gives a vivid account of the family's latest move:

"...Our new house [10 Ashfield Terrace, Harold's Cross, Dublin] is better than our old one but dull, from my Howth window I had a view of a wide sea and much heather and at times could say 'there goes a grey gull - Let verse be as spontaneous as the flight of a grey full over the bay' But here from my window I see a straight wall and by much stretching round the corner, the glimpse of a bush very dim and dusty - a lamentable view for a maker of verses."

By the following year he is writing with immense enthusiasm about his new friends and connections in literary Dublin. He describes such central figures as Katharine Tynan ("...a writer of exquisite religious poetry...") and C.H. Oldham, the editor of the Dublin Literary Review who is said by some to be political radical "up to the lips in plots and away in his house on the slopes of the mountains he entertains nihilists and other strange people". John O'Leary - "the famous fenian most gentle of rebels most courteous of convicts" - looms large in these letters, which make clear O'Leary's great importance in introducing Yeats to Irish Nationalist politics.

Cyril Veasey returned from India in 1886. His reunion with Yeats was not a success and the friendship with the Veasey family began to fade, although in 1886 Ethel Veasey was the recipient of an inscribed copy of Mosada (sold Parke-Bernet, 1 May 1941, lot 130). Letters from this very early period of Yeats's life are exceptionally rare: only four letters in the Collected Letters Volume I, 1865-95 (1986), date from before 1887.