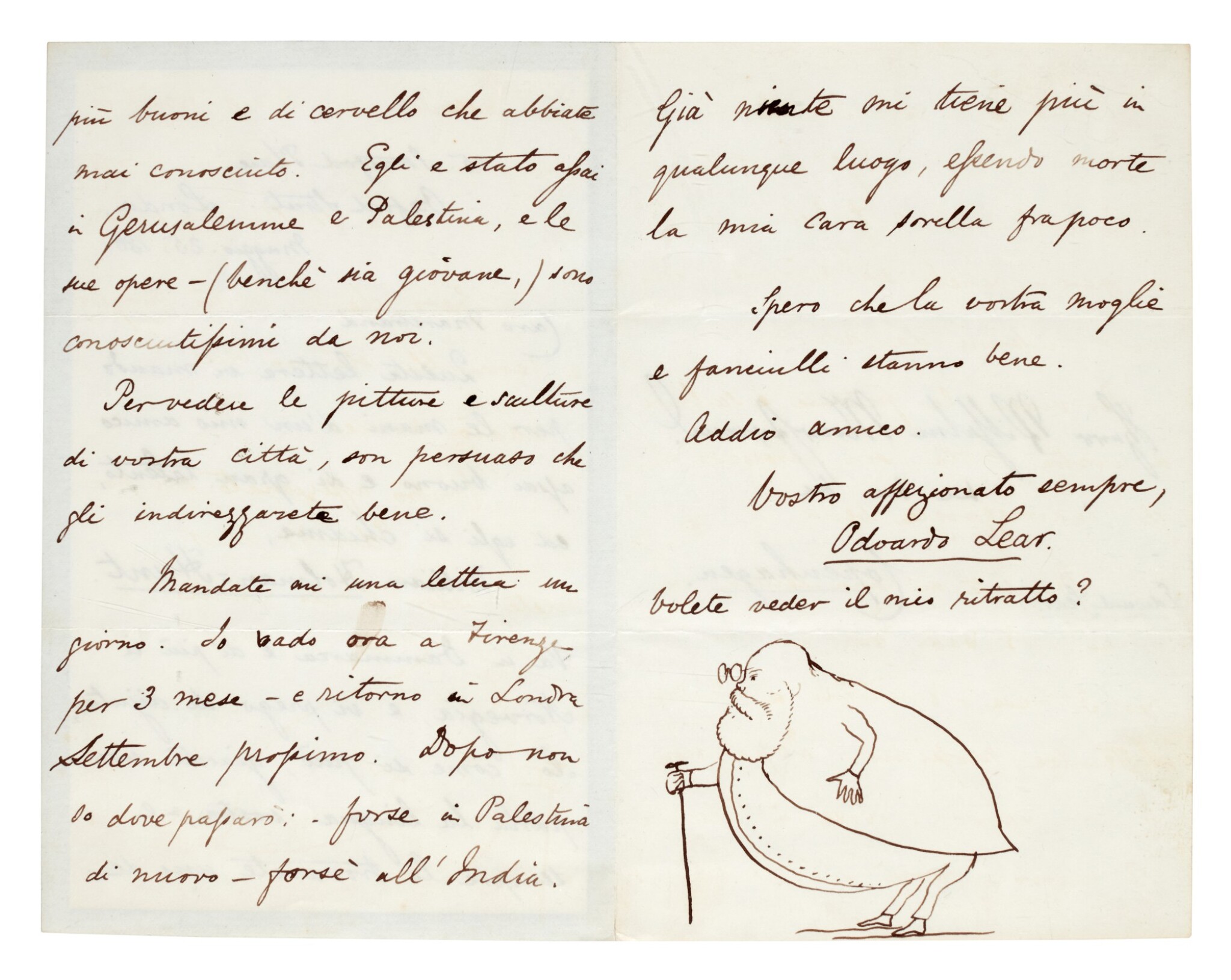 AN EXCEPTIONAL SERIES OF PERSONAL LETTERS FROM LEAR TO HIS FRIEND AND ARTISTIC MENTOR, WILLIAM HOLMAN HUNT, A FOUNDER OF THE PRE-RAPHAELITE BROTHERHOOD.

Edward Lear first met Holman Hunt in 1852 when Lear was aged 40 and Holman Hunt was 25. It was Holman Hunt who was the established artist and Lear who was the artistically uneducated junior. The friendship between the two men would last over three decades until Lear’s death in 1888 with Lear addressing the younger man as “my dear Daddy” or “my dear old Daddy”. Their correspondence is scattered between numerous libraries including the British Library, the John Rylands Library (University of Manchester), the Getty Institute, the Houghton Library (University of Harvard) and the Huntington Library. The current letters are from a private collection: a descendant of Edward Lear’s sister, Sarah Street.

The letters discuss many aspects of Lear’s art and views on art. An early letter describes the trials of painting landscapes with live animals (“…I went down to Berkhamstead … but I could not manage the sheep at all. There were very few (10) in a larger paddock – and they ran about like cockroaches. When I had a man to hold them, they kicked up such a row… …but I remember your perseverance, and benefit thereby. I shall buy a sheep and draw all his mussels and boans and have a skellington set up…”) and, from 1855, there is Lear’s insight into the hanging of John Everett Millais’ work at the Royal Academy (“…Millais’ wonderful work was hung so as to do the worst for it. But our friend saw it, and the row and hullabullou he made was stupendous! He forced the three to move it, threatening to resign instantly if they didn’t. No such scene ever was known and you may imagine that Uncle John was not over placid. My opinion of his picture is this – that it is one of the most surprising works of genius in every way…”) There are frequent notes about negotiations over the selling price of his own art (“…if it sells I shall really begin to look upon you as a sort of good genius: and if it don’t I shall equally regard your good nature with the feelings it rationally calls forth…”) and statements about current work (“…I …have since returned to my Swiss Matterhorn picture, which will astonish the world, inasmuch as I manipulated the grass green and the snow white...”)

Given that Holman Hunt was Lear’s artistic mentor, there are numerous thoughts from Lear about his own artistic creed (“…It seems to me that my ‘Mission’… is to portray many places. You did a great deal for me in painting, and much more may yet have to come out of me – yet it seems to me that to aim at what requires long application and tax of eyesight is not my duty. And, after all, our talents are not all similar or equal… …You know my inaptness and awkwardness in all outdoor manipulatory artwork: moreover my temper is more irritable and my thumbs stiffer and my eyes worse than of old.”) There are also frequent concerns about his own artistic ability (“…I worry worry worry about this picture. There is so much of it so sloshy. I don’t know what you will say. Yet the whole scene is in reality one of the loveliest on earth, and I don’t know how it is, I have got it too dark and heavy, for with whatever deep effect of light and dark you see olives, there is always a distinct persuasion of their light foliage and wonderful transparency. Then, the foreground changes weekly here – new sorts of vegetation coming out. The real time of the picture is one hour before sunset at the end of February or maybe of March. Then the mountains are covered with snow, the olives have not got their fresh green leaves, and the ground is covered with moss, short grass and little herbs, anemones and the first Asphodel flowers. Also there is water below the olive trees in the valley...”) and there are numerous expressions of self-doubt (“O dear dear dear! – the more I see of nature the more sure I am that one Edward Lear should never have attempted to represent her unless as a painter of bees, blackheadlers and blutterflies. Yet I cannot but know that there is a vein of poetry within me that ought to have come out - though I begin to doubt if it ever will...”)

The letters reveal that Lear found Holman Hunt a receptive confidant and this allowed him to assess his own personality (“Perhaps the irritable nature of my temperament, and my unsettled early life make me more susceptible to what recovers me here - isolation and loneliness, and sometimes drives me half crazy with vexation. Really, when anyone tells me, as you do, your own inward thoughts and feelings, it flashes across me that after all I am a human being, notwithstanding much of the past year and a half has almost made me come to think otherwise…”) There are also examples of Lear’s conjectural thoughts on other’s reception of his ideas (“…I have no doubt Ruskin was disgusted at my pertness in observing that an accurate drawing of Chaucer’s left whisker or right ear, however wonderful in itself as a praiseworthy truthful copy, would not be so valuable as a less finished yet authentic picture of Chaucer’s face…”)

Lear first met Alfred, Lord Tennyson in 1851 and there are numerous references to the poet (“The Poet is highly disgusted by building. He is at Alum bay – 300 houses and a railway, and a Monster Hotel.”) Lear tells us about Tennyson reciting verse (“Alfred Tennyson has just read us his new poem – it is called Maud and is most astonishing. One part, beginning ‘oh that t’was possible to be’ is enough to make you stand on your head. There are other small poems also, so as to make a whole volume…”) and his reports frequently provide Lear’s own opinions, such as appropriate subjects for poetry (“I have been down twice to A. Tennyson’s – the first time the party was pleasant… Yesterday I went again… when there was only Palgrave. Palgrave does not talk enough... AT read his ‘dying farmer’ which however remarkable as a curiously accurate portraiture of a queer subject, is by no means a pleasing poem to me. That men play the fool in the face of death and a Creator is no new fact – but I doubt its being an agreeable one for poetry. However, perhaps I am over fastidious…”)

Given Lear’s precarious health there are many, many statements about his condition, ranging from a simple cold (“…I had to blow my nose for eight days without stopping and had to use a tablecloth instead of a pocket handkerchief…”) to more serious issues (“I would have you to know that I do not walk in these days, but only ‘doddle’ – and that I can’t get into or out of a carriage without help: and moreover, that having already had some falls and fits, I dare not any longer go about alone. At 74 such changes must be expected...”) There is also an example of Lear confiding morbid thoughts (“…There are hours when I would rather life even abruptly ended… But… I know too well that one must persevere to the end – or ought so to do…”)

The correspondence provides numerous domestic details, intended and actual travel plans, discussions about friends, the state of Lear’s finances (“…I am in a pickle for tin…” and “…I am frightfully in debt and must sell to get rid of something or other to set me straight…”) and a vast range of additional topic, such as Lear’s dislike of the English climate (“One thing is perfectly certain, that I never can live wholly in England – never mine to winter there…”) or strict instructions about the Italian Post (“…Please write to me now and then: Poste Restante Florence (M.M. Edward Lear) will find me. Don’t put ‘Esq’ or one never gets the letter, because they believe one’s name is Esq and stick the document in letter E for ever…”)

The letters are generally written with Lear’s sense of fun and include some wonderfully inventive descriptions (“You see by the disjointed manner in which I write that I am constantly interrupted, and that instead of going on like a railroad I am like the engine a hopping off the rails”) together with deliberate mis-spellings (“Oly City” and “…Shall you disown your hoffspring…” for example). In discussing his illustrations for Tennyson’s poetry, Lear describes them in terms of natural history (“…of the 200 AT illustrations, all the ‘Eggs’ (or first effects) are done; and a great many of the 2nd lot (or ‘caterpillars’) and now 20 of the ‘chrysalisses’ or last change before the final butterfly – though what that may be is even yet a mystery...”)

The letter – written in Italian – to the Danish painter and illustrator Nicolai Wilhelm Marstrand (1810-1873) was given to Holman Hunt to serve as an introduction when Holman Hunt visited. Lear had described the Danish painter to Holman Hunt as “one of my most intimate companions, and I think you cannot fail to like him”. The meeting presumably never happened, however. Lear concludes his letter to Marstrand with a question (“Volete veder il mio ritratto?”) and then provides a typical humorous self-portrait.

In her paper on Lear and Holman Hunt (see Rivista di studi vittoriani, 2014, pp. 79-99), Sara Lodge concludes noting that “Edward Lear and William Holman Hunt, in death as in life, make an odd couple: the former apparently so mercurial, the latter so dogged in his approach to art. But their letters reveal sympathies and dialogue that may make us reappraise the scope and modernity of their intellectual and cultural work and how they reinvent the artistic father/son relationship to transform the burdensome anxiety of influence into a mutually constructive, performative correspondence”. Lear’s own statement, found in the present series of letters, is significant in noting “…You see Daddy you took an awful load of responsibility on yourself when you adopted me as your son…”

Many letters creased with tears and minor loss. Occasional excisions.