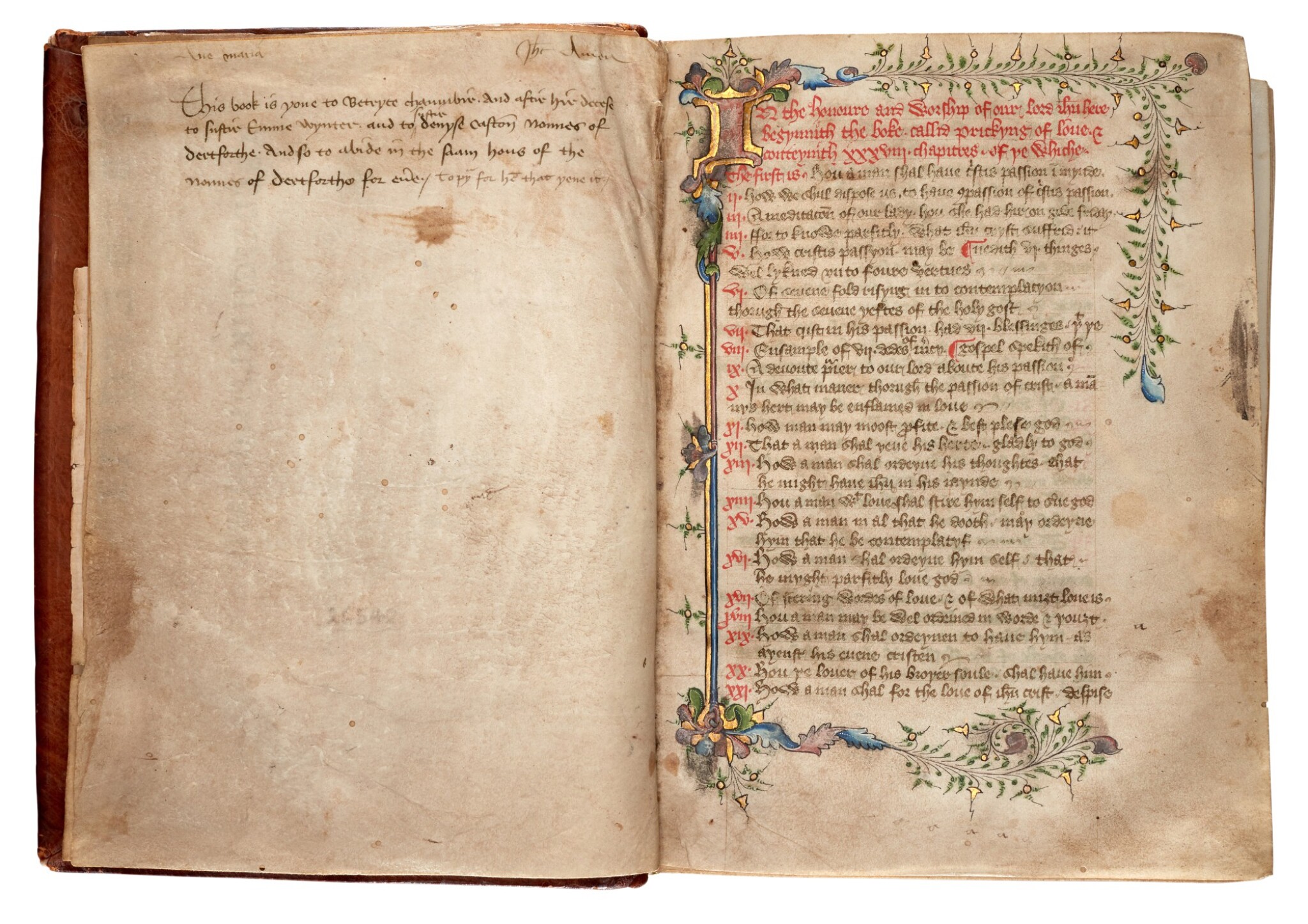 vellum, c.235×170mm, i (paper) + 2 (medieval, the first formerly a pastedown) + 173 + i (paper) leaves, foliated ‘a’ (a wide stub), I–III, 1, 1*, 2–174; written in a professional anglicana script, with 30 lines per page in a ruled space c.170×100mm (except ff.94–101, quire 13, which has 31 lines in a ruled space c.175×110mm), rubrics and running headings in red, quotations underlined in red, paraphs alternately red or blue, complete, with catchwords and leaf signatures, in 22 quires each of 8 leaves except that the 6th & 7th (blank) leaves of quire 12 have been excised after f.93 (the central bifolium of this quire, ff.91–92, is also upside down and back to front, a binder’s error that predates the 17th(?)-century foliation), quire 13 is contemporary but was apparently added as an afterthought, as it has different parchment, script, ruling, and number of lines of text; illuminated with two foliate borders springing from large gold and foliage initials, and decorated with two-line initials in blue with red penwork flourishing throughout; with typical thumbing, stains, scribbles, etc., but generally in good condition throughout, with wide margins, and entirely legible. Sewn on five (medieval?) bands and bound in plain brown 17th(?)-century calf over pasteboards, with plain blind fillets and no spine title, the edges of the leaves speckled red, the joints repaired (the final page with a note recording ‘Spine repaired by Fifield of the Bodleian, 1961’), the bands and most of the spine leather broken between ff.87 and 88.

A COMPLETE 15TH CENTURY MANUSCRIPT IN MIDDLE ENGLISH BY A NAMED SCRIBE, STEPHEN DODESHAM: ONE OF ONLY TEN COMPLETE COPIES OF AN IMPORTANT WORK OF RELIGIOUS MEDITATIONS IN ENGLISH AND THE ONLY ONE REMAINING IN PRIVATE HANDS.

(1) From the only Dominican nunnery in England, at Dartford, in Kent, which was founded immediately after the Black Death in the mid-14th century (for a history of the house, see A History of the County of Kent, 2 (VCH: London, 1926): inscribed in the early 16th century, ‘This book is youe to Betryce Chaumbir’. And aftir hir decese to sustir Emme Wynter. and to \sustir/ Denyse Caston’ nonnes of Dertforthe. And so to abide in the saam hous of the nonnes of Dertforthe for euere. To p(ra)y for he(m) that yeue it’ (f.IIIv). Curiously, for a text that does not exist in many copies, one other surviving example also comes from Dartford, and was owned by Alice Brainthwaite, who was prioress in the 1460s. Of the eight books known to have been owned by the house, one is a Book of Hours, and five others are in English, including a Brut chronicle, the poems of John Lydgate, and the Rule of St Augustine (which the Dominicans followed). The house was dissolved in 1539, and the inhabitants pensioned-off; perhaps one of them took the present manuscript with her.

(3) Late 16th(?)- and 17th-century inscriptions on the front flyleaves include the names ‘William Richardson’, ‘William Emelaw’(?),‘Richard Baxter’, ‘John Vavasour’, and ‘Ald: Metcalfe’, and (f.3v) ‘Roberte’; these suggest that the book was in Yorkshire.

(4) ‘It is believed that the Manuscript found its way to Downside from the ancient family of Holme-upon-Spalding Moor in the East Riding [of Yorkshire]’ (Watkin, 1941, p. 83).

(5) Dom Odo Langdale, né Marmaduke Joseph Grattan Langdale (1861-1934), Benedictine monk of Downside from 1880, whose family had lived at Houghton near Beverley in Yorkshire since at least the 14th century; from his estate to:

(1) Prickyng of Love, opening with a rubric, ‘In the honoure and worship of our lord Ihesu here begynnith the boke. callid Prickyng of Loue. & conteynith xxxviij. chapitres. of ye whiche. The first is’, followed by a list of 38 numbered chapters, ‘Hou a man shal haue Cristis passion in mynde …’ (f.1r–v), and main text, ‘Al forwoundred of our self ought us forto be . . . mote louen our lord in the blisse of heuene Amen. Amen. Deo gracias. Here endith the tretyse. that is called Pryckyng of loue. that was maad by a frere menour Bonauenture. that was a Cardynall of the Court of Rome’ (ff. 1*r–90r; most of the final chapter is printed by Watkins, 1941, pp. 76–77).

(2) ‘How a man shal knowe. whiche is the speche of the flesshe in his hert. and whiche is of the world. and whiche is of the fende. [i.e. fiend] and also whiche is of god almighty. our lord Ihesu Cryst. Seynt Bernard techith and seith thus. If thou feele a thought or a stirying … yt is spekyng of god. and not of thy self. Ihesu mercy. lady helpe.’, followed by a couplet in red, ‘To whom I beseche. for me specialy p(ra)ieth for g(ra)ce / And of my synnes amendeme(n)t. tyme. wille & space’ (ff. 90v, 92v, 92r; 91r–v and 93r–v are blank). This text also follows the Prickyng of Love in Cambridge, Trinity College, MS B. 14. 9, and New Haven, Beinecke Library, MS 223.

The main text is a translation into Middle English of the 13th-century Latin Stimulus Amoris by James of Milan (alias Pseudo-Bonaventure), a meditation on the Passion and wide-ranging treatise on the spiritual life. The current text has clarifications and many expansions added by the translator. The translation is attributed in five manuscripts to Walter Hilton (d.1396), the English Augustinian mystic and author; manuscripts in Cambridge (University Library, MS Hh.1.12) and New Haven (Beinecke, MS Osborn fa46), for example, specify that it ‘was translate oute of Latyn in to Englyssh by the travayle and diligence of a religious persoone maister waltir hilton chanon and governoure of the house of Thurgarton biside Newark’.

Ten complete, and six incomplete manuscripts are recorded (plus two fragments sold in our rooms, 7 December 2010, lot 17). All other copies are in institutional ownership (the former Heneage copy having been acquired by the Beinecke Library from Quaritch in 2005; it is now MS Osborne fa46), and we are not aware of a complete copy being offered for sale at auction since we offered the Stonor copy in our rooms, 29 June 1938; it is now University of Pennsylvania, MS Cod. 218. A somewhat modernised version of the text was printed in 1952 by Clare Kirchberger, and it has been edited by Harold Kane (Prickynge of Love, 2 vols, Salzburg, 1983), but his work was based almost entirely on microfilms, and is thus reported to be highly inaccurate (cf. the review by Sarah M. Horrall in Studies in the Age of Chaucer, 8 (1986), pp. 211–13); it is therefore probably fair to say that the text still awaits a critical edition.

The content is wide ranging and addresses many areas of late medieval life and spirituality; the passages concerning images within the treatise on the Ten Commandments, for example, are of particular interest to the art historian: ‘Alle suche similitudes and ymages shold be as kalanders [i.e. guides] to leude [i.e. common] folke; that right as a clerk seeth by his boke what he shold do so leude men, whan they lacken teching, sholden lerne by ymages … if thei see ony likenesse of crist don on the cros have they minde on the bittre peynes and passion that he suffrid … if they se ony liknesse or ymage made yn mynde of ony other seynt, rere they up her mynde of her soul to hevene prayeng all the seintes … nat bilevyng either trustyng that thilke ymage or likenesse shal bringe ony man oute of gostly meschif or bodely …’

The other main text, Pore Caitif, survives in more than thirty copies and is largely derivative from other texts (including Richard Rolle’s Form of Living). Manuscripts vary considerably, but the most characteristic version consists of fourteen tracts on subjects similar to those covered in the Prickyng, including the Creed, Ten Commandments, Pater Noster, Name of Ihesu, and Myrour of Chastite. A good recent introduction to the text and its manuscript transmission is Diana Denissen, Middle English Devotional Compilations, 2019, chapter 2.

Ian Doyle identified the copyist of this manuscript as the well-documented scribe Stephen Dodesham: A.I. Doyle, ‘Stephen Dodesham of Witham and Sheen’, in Of the Making of Books: Medieval Manuscripts, Their Scribes and Readers. Essays Presented to M. B. Parkes, ed. by Pamela Robinson and Rivkah Zim (Aldershot, 1997), pp. 94–115, at pp. 102–03; in his later ‘The Speculum Spiritualium from Manuscript to Print’, Journal of the Early Book Society, 11 (2008), 145–143, at footnote 26, he reaffirms this attribution and explains that he accidentally omitted this manuscript from the list of Dodesham’s works on p.115 of the earlier article.

Neil Ker dated the manuscript to the second half of the century, but Doyle, who paid more attention to illumination and was more familiar with Dodesham’s handwriting, thought that it is ‘probably of the second rather than the third quarter of the century’. Dodesham probably started his career as a lay scribe, to judge from the fact that he wrote at least three copies of Lydgate’s Siege of Thebes, (discussed and reproduced in A.S.G. Edwards, ‘Beinecke MS 661 and early fifteenth-century English manuscript production’, Yale University Library Gazette, 66 (1991), pp.181–96), but for the final decades of his life was a Carthusian, first at Witham in Somerset, from at least 1462 until at least 1469, and then at Sheen, by 1471 and until his death about a decade later. The lack of the characteristic Carthusian ‘punctus flexus’ punctuation is another element in favour of a date early in his career; an example of his rather different late hand, c.1475, is reproduced and described by M.B. Parkes, English Cursive Book Hands 1250–1500, 1969, p. 6 and facing plate.

The manuscript is cited, and aspects of it discussed, in a very large number of other studies.