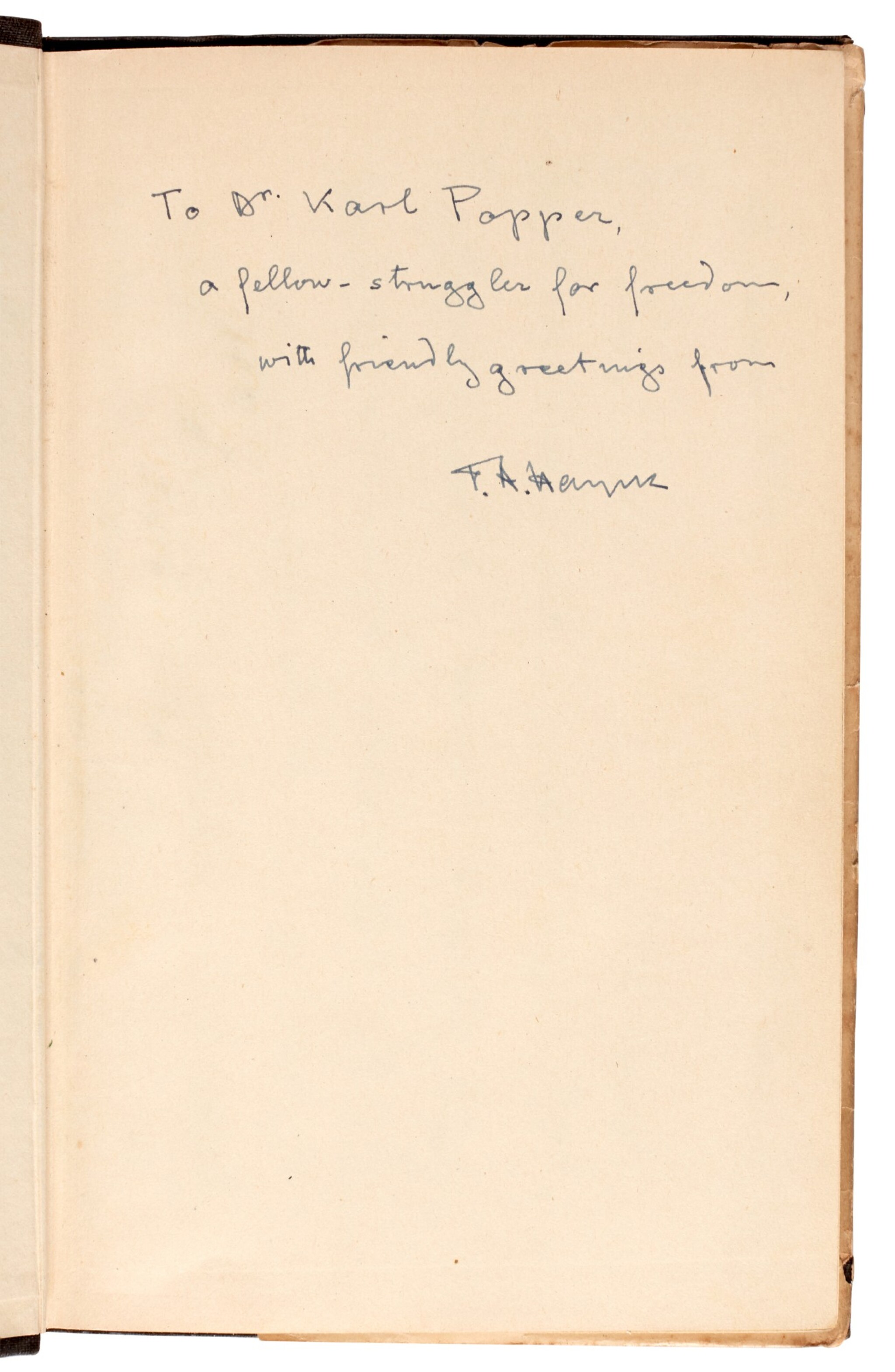 [with:] Karl Popper, autograph letter signed ("Karl"), to Melitta Mew, presenting her with this book as a birthday gift ("...It is the copy he sent me to New Zealand on publication of the book, with a beautiful dedication. And thank you for everything you are doing for my work (and me)..."), 1 page, 4to, headed stationery of 136 Welcomes Road, Kenley, Surrey, 23 January 1994

THE ROAD TO SERFDOM INSCRIBED TO THE AUTHOR OF THE OPEN SOCIETY: AN EXCEPTIONAL PRESENTATION COPY FROM THE DARK DAYS OF THE SECOND WORLD WAR, UNITING TWO OF THE GREATEST INTELLECTUAL DEFENDERS OF FREEDOM.

Hayek's Road to Serfdom is one of the most influential books of the last century. Its arguments against collectivisation and government control of the economy breathed new life into liberalism and have inspired generations of politicians and economists. He wrote it in the early 1940s as intellectual war work, although it was aimed as much against the increasing dominance of socialist thinking in Britain as it was against Fascist totalitarianism. Karl Popper was one of Hayek's few intellectual allies at this time, and shared his dismay at Anglo-American complacency about their possible drift towards totalitarianism. Popper's own war work, The Open Society and Its Enemies, was an ambitious attack on the philosophical underpinnings of totalitarianism equally applicable to left and right, and was read by Hayek in manuscript before the publication of The Road to Serfdom. For other books belonging to Popper see lots 66-68.

The life and work of Fredrich von Hayek (1899-1992) and Karl Popper (1902-1994) were deeply entwined. Both men came from intellectual Bourgeois Viennese families, and their political outlook was in many ways shaped by a confrontation, in early adulthood, with the fragility of liberal society through a series of catastrophes that destroyed the world of their childhood: the carnage of World War I; the collapse of the multi-national and relatively liberal Austro-Hungarian Empire with Vienna as its capital; and the destruction of their families' savings by hyper-inflation. They both studied at the University of Vienna and both men also turned to socialism in their early 20s. However, they first met in London in 1935. Hayek was at that time employed at the LSE and Popper was in the city on a visiting lectureship. Popper faced increasing anti-Semitism in Austria in the 1930s and in November 1936 he accepted a lectureship at Canterbury University, Christchurch, New Zealand, where he was to remain until after World War II - when, with Hayek's assistance, he assumed a chair at the LSE.

As liberal democracy fought for its life in the 1940s, Hayek in Cambridge (where the LSE was evacuated) and Popper in Christchurch brought an exceptional vigour and urgency to their explorations of the roots of totalitarianism. Both men looked past the immediate menace of Nazism to future threats to liberalism, especially from the left. Popper completed his manuscript of The Open Society and Its Enemies in 1942 but had difficulty finding a publisher from the distant safety of New Zealand. He eventually sent the manuscript to Hayek and with his help at the end of 1943 it was accepted by Routledge, who published The Road to Serfdom in 1944 and The Open Society in 1945. This remarkable inscribed copy of Hayek's book is a tangible testament to the deep connection between two men who, from opposite sides of the globe, made some of the most powerful and resonant defences of liberalism, freedom, and democracy at a great turning-point of world history:

"...Only where we ourselves are responsible for our own interests and are free to sacrifice them has our decision moral value. We are neither entitled to be unselfish at someone else's expense nor is there any merit in being unselfish if we have no choice. The members of a society who in all respects are made to do the good thing have no title to praise..." (Hayek, The Road To Serfdom)

Gifted by Popper to his secretary and assistant, Melitta Mew, 1994