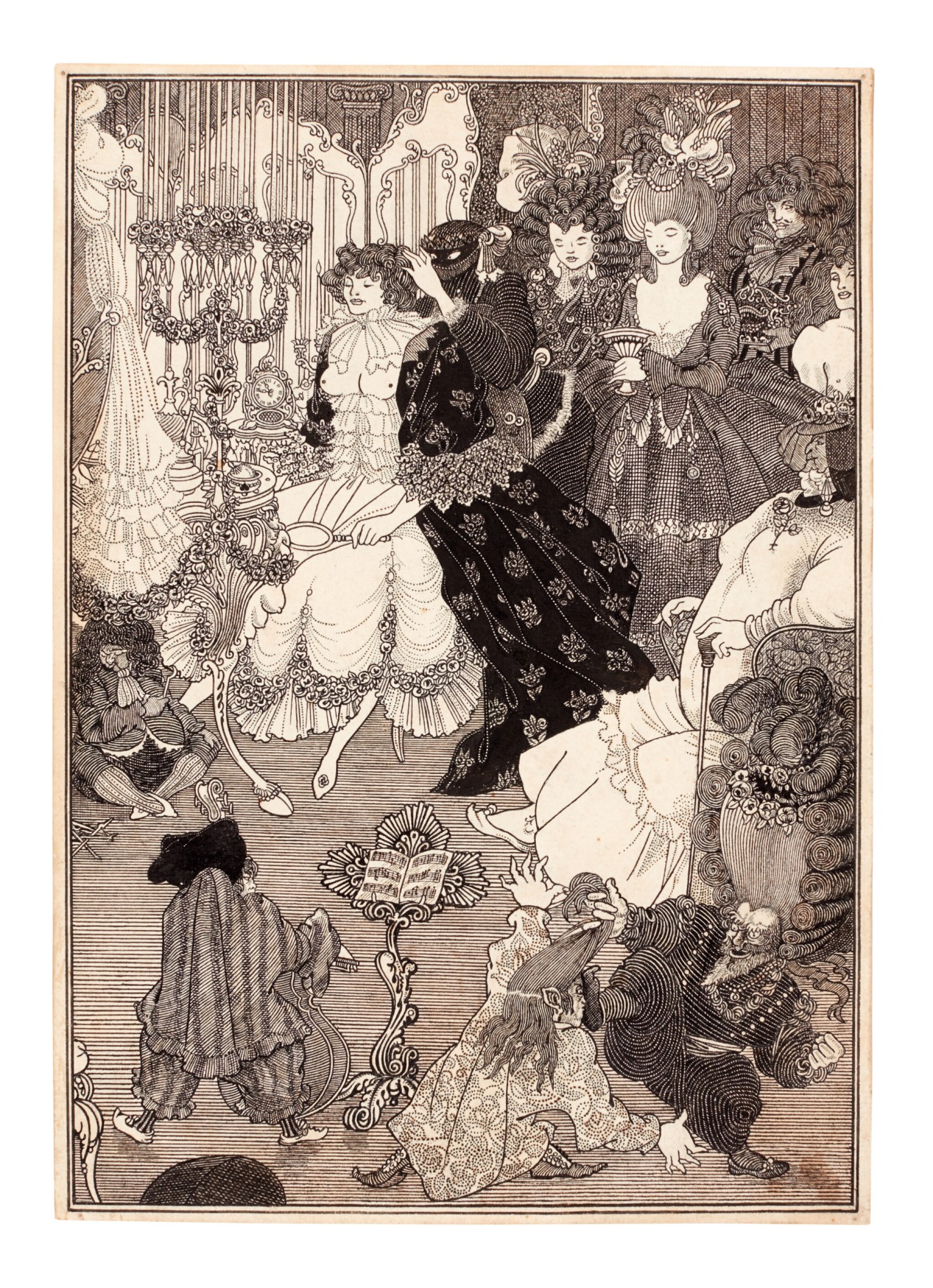 'The Toilet of Helen'

AN EXCEPTIONAL BEARDSLEY DRAWING. THE ORIGINAL HAS, HITHERTO, BEEN LOST FOR OVER A CENTURY.

The Savoy was a periodical published by Leonard Smithers in 1896. Smithers – seeking to distance the publication from any connection with Oscar Wilde – introduced the first issue with the statement “We are not Realists, or Romanticists, or Decadents". The first number – dated January 1896 – included the first three chapters of ‘Under the Hill’ (subtitled ‘A Romantic Novel’) by Aubrey Beardsley and was accompanied by three illustrations of which this is one. It accompanies the second chapter.

It appears that Beardsley first informed Smithers on 7 November 1895 that ‘the Toilet scene goes splendidly though I’m afraid it can’t possibly be got through with till Saturday night’. Around three days later Beardsley had still not finished for he wrote ‘…the Toilet is going really grandly but there is such a heap of work in it. It will be finished tomorrow and that will include a night’s work’ (see Letters, 1970, pp. 103-104).

As Linda Zatlin notes in her catalogue raisonné of Beardsley, ‘…the “night’s work” produced a drawing bursting with an abundance of detail – one reason it took longer’. Zatlin notes that Max Beerbohm specifically referred to this picture when he complained about Beardsley’s ‘plethora of exquisite inventions’. Zatlin suggests that ‘…it was as if Beardsley could deny his weakening body by producing copious details’.

Early criticism found Beardsley’s imagination at times horrific. The New York World stated that Beardsley’s '…mind lingers, snuffling and sniffing things from which most of us turn away in disgust. The most remarkable of the three pictures is that of the Princess Helen at her toilet. Helen herself is a disordered dream. Several wan horrors in female form attend her. Two monstrous dwarfs are fighting in a corner' (16 February 1896, p. 2).

Critics have found the large figure on the right, Mrs Marsuple or Priapusa, to be of particular interest. Edward Hodnett in Image and Text (London, 1982) suggests that it is a portrait of Oscar Wilde.

Zatlin claims that ‘…this drawing inspired twentieth-century literary and visual work. The flamboyance of Helen’s dressing-room, the candles and her jewels in this drawing… are mirrored in the elaborate wording of the ‘Game of Chess’ section in T.S. Eliot’s The Waste Land’ and ‘…Mrs Marsuple may have been a source for the obese seated nude with an aquiline nose and hatchet profile resting on layers of fat that obscure her chin in Otto Dix’s Drei Weiber…’

This drawing was last recorded in a Berlin bookdealer’s catalogue in 1918. It seems likely that it was purchased from the bookdealer, Paul Graupe, by Max Morgenstern, who travelled widely in Europe on business. Small wonder that at the same time he indulged his passion for rare books by visiting establishments such as Graupe's.

Born in 1883 in Moravia, then part of the Austro-Hungarian Empire, Morgenstern made his fortune by building up his father’s textile mill in Bielsko-Biala in Poland and became an award-winning and world-renowned manufacturer of high-quality worsted cloth. In the early 1900s, he began collecting works by Alfred Kubin (he would become the artist’s first patron and a lifelong friend) and compiled a magnificent library of over 1,500 rare books, many of which were bound by the famous Wiener Werkstätte, a productive cooperative of artisans in Vienna, which was regarded as a pioneer of modern design. His library included several books illustrated by Beardsley and a copy of Beardsley's Letters to Smithers (Chiswick Press for the First Edition Club, London, 1937).

Family photographs show Morgenstern in Berlin around 1918. It was in Berlin that he met Hertha Israel and the couple married in 1922. They would establish their family home in Wattmanngasse in Vienna. As Morgenstern’s business continued to prosper in Bielsko, Max and Hertha’s two sons were sent to England for their education, while the couple enjoyed entertaining members of the Viennese intelligentsia and artistic circles at their house in Wattmanngasse. Their art collection, which largely consisted of works by Viennese Secession artists and beautiful Wiener Werkstätte furniture, provided a wonderful and impressive environment for their illustrious guests.

With the Anschluss in 1938 the Morgensterns were forced to flee. Hertha Morgenstern escaped from Vienna and, a month later, Max left from Poland. They managed to join their sons in England and eventually settled in Bradford in Yorkshire. The Nazis seized many of the Morgenstern’s possessions although, in 2019, sixteen works by Alfred Kubin were restituted to the heirs of Max and Hertha Morgenstern. The Morgensterns managed to escape with a handful of pieces from their art collection, including some works by Kubin and this drawing by Beardsley.

It is Sotheby’s honour to present Beardsley’s drawing – last seen in 1918 - from such a prestigious provenance.