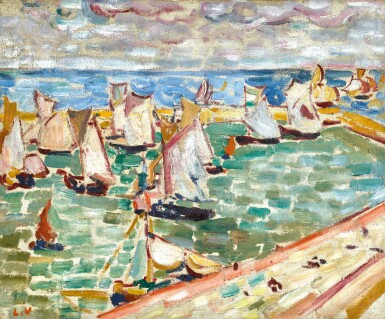 This work is recorded in the archives of l’Association Les amis de Louis Valtat.

The canvas is lined, and examination under UV light reveals a few minor spots of retouching to all four corners, as well as to the centre of the lower edge to address old pinholes. There is some framer's tape along all four extreme edges not visible when framed. The impasto is rich and well-preserved. This work is in good overall condition.

The present work, painted in 1905, was executed in the same year Louis Valtat exhibited alongside Matisse, Marquet, Camoin, Manguin, Vlaminck, Derain, Dufy and van Dongen at the famous Salon d’Automne – the ground-breaking and seminal exposition, which would introduce the public to the art of the Fauves. Valtat’s vivid and intense tones of red, blue and yellow are complimented by the expressive use of thick brushstrokes, while his care in portraying everyday subject matters and the play of light and movement show an unwavering debt to the Impressionists. Areas of the canvas are painted with Pointillist delicacy and restraint, but these are overtaken by the broader more emphatic strokes that recall Vincent van Gogh, whose art Valtat had seen in Paris.

As Sarah Whitfield further observes, 'Louis Valtat, whose colour appears to float on the surface of the canvas, is another painter somewhat loosely bracketed with the Fauves. Both Valtat, who like Matisse was born in 1869, and Seyssaud, who was two years older, belonged to the generation of painters who understood the picture surface to be primarily a flat piece of canvas covered with areas of paint' (Sarah Whitfield, Fauvism, London, 1991, p. 28). However, in spite of the sweeping scale and bold execution of the present composition, Valtat’s Voiliers au port belie an inherent quietness, which Raymobd Cogniat identifies as an underlying quality of the artist’s œuvre: ‘Valtat was in his own way, an intimiste, not only when he painted interiors or flowers or still lifes in his warm tones, but also when he turned his joie de vivre to the landscapes that indicated his constant preoccupation with the representation of nature as he saw it, bathed in peace and sunlight. His canvases are suffused with light like that of a golden summer's day’ (Raymond Cogniat, Louis Valtat, Paris, 1963, p. 30).

Absorbing the chief tenants of Impressionism and Pointilism, Valtat employs a bold use of colour envisioned through thick layers of pigment and brushstrokes underpinned by a simplicity and poignancy that reposition him as one of the forerunners of Fauvism. This was re-affirmed in the late 1960s when several retrospectives and re-appraisals by art historians rightfully reassessed and elevated Louis Valtat’s position within the canon of Impressionist and Post-Impressionist Art. 'Today, when the history of the development of painting is seen in its proper perspective, these lesser-known artists are regaining the status they deserve. Among them, Louis Valtat is one of the most outstanding, and it is astonishing that, in his lifetime, he attracted only the attention of connoisseurs rather than the universal recognition which he should legitimately have shared with his more famous contemporaries' (George Besson, Valtat et ses amis: Albert André, Charles Camoin, Henri Manguin, Jean Puy (exhibition catalogue), Musée des Beaux-Arts, Besançon, 1964, p. 20).