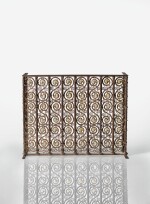 adapted for use as a firescreen

Overall in very good condition. This lot represents a section of the elaborate balustrade that Louis C. Tiffany designed for the historic Havemeyer House in the early 1890s. The balustrade was adapted for use as a firescreen by adding the upper metal molding and the lower feet at some point in the history of the piece, which integrate seamlessly with the form. The balustrade is comprised of a series of “S” shaped, twisted brass wire decorations with inset opalescent paisley-shaped molded glass tiles. These decorative sections are divided by vertical twisted iron posts. The balustrade was originally entirely gilt, however the majority of the original gilding has been lost and is retained only in the recessed contours of the design. The balustrade has acquired a rich patina with age and presents with some corrosion and light surface soiling concentrated to the recessed contours of the design. The metal surfaces with scattered surface scratches, abrasions, and wear consistent with age and handling. The twisted wire decoration with some occasional breaks throughout, visible in the catalogue illustration, not visually distracting and not affecting the stability of the work. The “studded” metal bands which secure the “S” shaped decorations to the vertical posts display some looseness and in a few instances are lacking entirely, which does not affect stability or the visual harmony of the composition. These bands were reinforced at some point in the history of the piece with wires, which also display some occasional looseness. The proper left rear vertical post is lacking its disk-shaped foot. The molded glass tiles display a range of tonalities from ice white-blue and warm golden amber. The glass appears to be all original and undisturbed and is in very good condition overall. An extraordinarily elaborate work with impressive visual presence when viewed firsthand.

﻿﻿﻿In response to your inquiry, we are pleased to provide you with a general report of the condition of the property described above. Since we are not professional conservators or restorers, we urge you to consult with a restorer or conservator of your choice who will be better able to provide a detailed, professional report. Prospective buyers should inspect each lot to satisfy themselves as to condition and must understand that any statement made by Sotheby's is merely a subjective qualified opinion.

Commissioned directly from the artist by H.O. Havemeyer, New York, circa 1890-1892
Private Collection, Beverly Hills, California
Acquired from the above by the present owner, 2006
"Modern American Residences," The Architectural Record, vol. 1, no. 3, January-March 1892 (for interior views of the Havemeyer House showing the balustrade)
Alastair Duncan, Martin Eidelberg and Neil Harris, Masterworks of Louis Comfort Tiffany, London, 1989, p. 23 (for an interior view of the Havemeyer House showing the balustrade)
Janet Zapata, The Jewelry and Enamels of Louis Comfort Tiffany, New York, 1993, pp. 31 (for the above mentioned interior view of the Havemeyer house) and 34
Louis Tiffany was, by 1890, firmly established as one of America’s leading designers and manufacturers of leaded glass windows. Originally finding national acclaim as a painter and superb colorist, Tiffany was by the late 1870s one of the first artists of note in this country to become an interior decorator. His well-publicized work in the Madison Square Theater, Seventh Regiment Armory (now known as the Park Avenue Armory) and the White House brought him international fame. Leaded glass windows were widely featured in several of his commissions and Tiffany, by the mid-1880s, decided to focus on that aspect of his work. The decorating firm was disbanded and the Tiffany Glass Company was established in 1885. This did not mean, however, that Tiffany had totally abandoned interior design.

Charles Lewis Tiffany, the primary owner of Tiffany and Company and Louis’ father, acquired a large plot of land at the corner of Madison Avenue and 72nd Street. He soon hired the architectural firm of McKim, Mead and White to design a mansion that would house several members of the Tiffany family. Louis quickly took a leading role in controlling the layout and interior decoration of the structure. Completed in 1885, the 57-room building was one the largest private residences in New York City. Louis Tiffany and his family moved into the fourth and fifth floors, the latter of which became his studio. The 2500-square foot room, with a 50-foot ceiling, epitomized the artist’s decorating style: “The studio proper is Mr. Tiffany’s own design and follows no accepted rules. It is more like some such wonder as Aladdin used to rub out of his wonderful lamp than anything else.”

Numerous parties and charitable events were held in the studio and reviewed at length by the local press. Henry Osborne Havemeyer, and his wife Louisine, were well acquainted with Tiffany’s audacious and daring decorative style when, in 1890, they were preparing to build their own mansion on the corner of Fifth Avenue and 66th Street. H.O. Havemeyer was one of the wealthiest men in the country, having amassed a fortune in the sugar refining business. He and Louisine were among the first American collectors of Impressionist art and they needed a larger and more impressive setting for their rapidly expanding collection than their brownstone on East 36th Street. Charles Haight, best known at the time for designing much of the campus at Columbia College and with whom Tiffany had collaborated previously, was hired as architect. Louis Tiffany and Samuel Colman, Tiffany’s close friend, mentor, and former business partner, were assigned the task of decorating the interior. Both Tiffany and Colman were long-time associates of the Havemeyers and the chance to create a unified design, without interference or financial restrictions, was too great an opportunity for them to resist.

It was a massive undertaking, with Colman assisting on the Music Room and Tiffany responsible for the remainder. In June 1890, Colman wrote to his colleague and fellow painter, James D. Smillie: “Mr. Havemeyer has given Tiffany the other parts of his house to do so that we will be deeply engaged together all summer and all autumn and very likely into the winter.” The job took even longer than Colman had anticipated. When finally completed in the spring of 1892, the interior of the Havemeyer mansion was unlike any in the world. No surface was left untouched, all of it bearing Tiffany’s eclectic style, ranging from Celtic to Moorish to Byzantine to Japanese. Glass mosaics enhanced the walls, special lighting fixtures hung from the ornate ceilings, several leaded glass windows were installed and specially designed furniture was created. Even the extraordinary balustrade, a section of which is on offer, bears Tiffany’s unmistakable touch.

The balustrade was incorporated around the balcony of the two-story picture galleries and on the “flying staircase” that allowed access to some of those rooms. The principal material used was finely wrought iron, a material that was in vogue at the time and was being used “in decorative establishments of the first order in New York and Boston.” Slender vertical footed columns on the front and sides were finely cast with spiraled beading for their entire lengths. Between each set of columns are three intricate curvilinear arabesques with serrated edges that retain some of the original gilt. These superbly crafted ornate sections of scrollwork have an upper and lower opening that are beautifully set with opalescent white molded glass jewels. Each jewel ranges in tone from near-transparent at the angular tip to a pearly white at the thicker oviform body and is an exceptional compliment to the metalwork.

Louisine Havemeyer, in her published memoir, reflected on what her decorative philosophy was when the family mansion was in its planning stage: “How often have I wished that those who are building new homes or decorating old ones would try and get away from the old moth-eaten Tudor embroidery…and have faith in someone who has the artistic ability and give him a chance to add another paragraph to art’s long and intricate history.” She and her husband gave Louis Tiffany that opportunity and he far surpassed their expectations. The Havemeyer mansion was torn down shortly after Louisine’s death in 1929 and much of its contents were sold at auction the following year. This section of the balustrade is one of the few remaining elements of the house in private hands and presents a rare opportunity to possess a significant object from a truly historic commission.