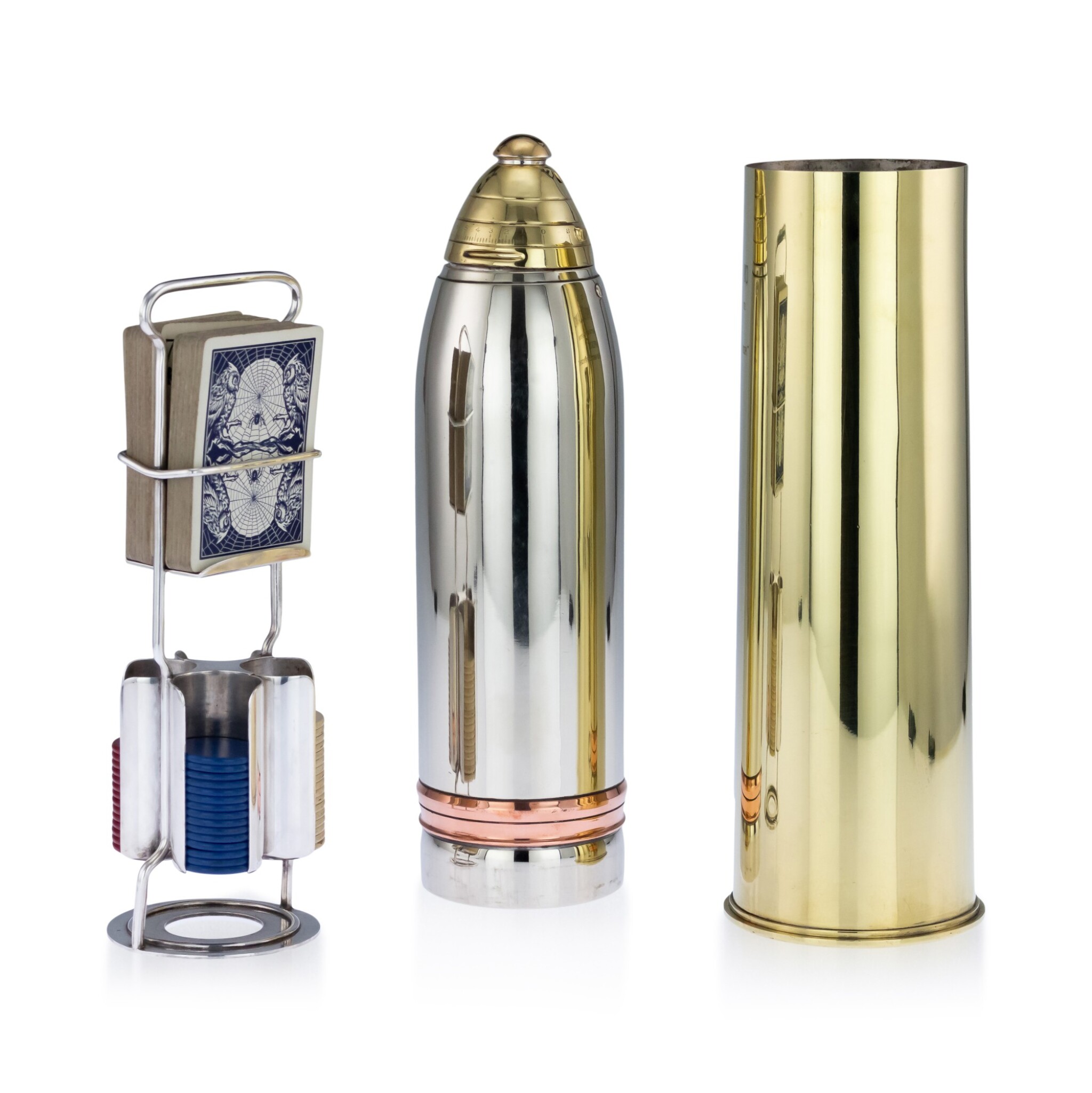 In the form of a first world war 18-pound shrapnel shell, main detachable cover as a ‘time delay fuze’ numbered up to 21 seconds, detachable ‘percussion’ cover for pouring via integral strainer, the lower part of the shell containing a detachable stand with two sets of playing cards and 65 red, white and blue counters, both upper and lower sections inscribed Fac-Simile/Eighteen Pounder/Shrapnel Shell, Patent applied for/ in America and Foreign Countries, the lower section also inscribed To/Captain Lyman Delano/Hero of the Battle of the Marne/ in Appreciation/ From a ‘Half-Shot Survivor’

The Gorham Company of Providence, Rhode Island began producing their 'Shrapnel Cocktail Sets' during 1915. In January the following year select retailers all over the United States were advertising this very newest 'Novelty of War Time, A Sideboard Surprise With Four Glasses . . . It is a fac simile in every detail of an 18-pounder shrapnel shell – its terrors slightly modified by the four cocktail glasses to be found in the silver plated plunger within. . . . The lower part of the Server consists of an actual 18-lb. brass shell discarded by one of the great ammunition factories. . . . With each Shrapnel Cocktail Set is given a booklet with full instructions for making the ''shrapnel,'' ''Biltmore,'' ''High Explosive,'' ''Cascade,'' ''Lone Tree'' and other cocktails.' (The Kansas City Star, Kansas City, Missouri, Friday, 21 January 1916, p. 3, advertisement)

Gorham subsequently modified the design of its Shrapnel Cocktail Set, replacing the glasses with a frame fitted with poker chips and playing cards, as in this example.

The recipient mentioned in the inscription was Lyman Delano (1883-1944), eldest surviving son of Warren Delano IV (1852-1920), president of the Delano Coal Company of Pennsylvania. He shared a grandmother with Franklin Delano Roosevelt (1882-1945), future President of the United States, and was also related to Theodore Roosevelt (1858-1919), the country’s 26th President. During World War I, Lyman Delano, Vice President of the Atlantic Coast Line Railroad, was a member of the South eastern Department of The American Railway Association's Railway War Organization in the United States. He was almost certainly not at the Battle of the Marne in France suggested by the inscription, as by the time of his draft registration on 4th September 1918, the battle had finished. The battle was however a highly important event to Americans, presaging the end of the war, and one in which American soldiers played an outstanding role. The inscription therefore should probably not be taken literally as a gift of one soldier to another, but more likely as comrades of another sort of battle, where the terminology was relevant to the gift and where the ‘survivor’ was ‘half-shot’ from the effects of alcohol rather than a bullet.

The dubious humour of such an object as the Shrapnel Cocktail Set cannot have escaped the notice of potential buyers in 1915, by which time the deadly nature of modern conflict had become all too clear. Graphic newspapers reports spared no detail: 'A shrapnel shell contains about 260 bullets, each of which is several times larger than the rifle or machine-gun bullet. These bullets cause much more severe wounds than rifle bullets, creating great destruction along their track, jagged and irregular wounds, and producing other bad results. At the same time fragments of the shell are often driven into a soldier's body.' (The Austin American, Austin, Texas, Sunday, 28 March 1915) Another newspaper called the device 'a gun within a gun.'

Making light of serious matters in times of stress is human nature. Captain Bruce Bairnsfather (1887-1959) of the Royal Warwickshire Regiment knew this when, having been invalided during the Second Battle of Ypres (April/May 1915), he invented the character of 'Old Bill,' a long-suffering soldier instantly recognisable by his walrus moustache and balaclava. Bairnsfather's cartoons of 'Old Bill's' misadventures in the trenches delighted an entire generation through the pages of The Bystander magazine.

Perhaps less well judged was Arthur Wimperis and Max Darewski's song, 'The Tanko' in the Palace Theatre Revue, Vanity Fair (London, 1916), sung by Regine Flory (1894-1926), a fascinating French chanteuse accompanied by 16 ladies of the chorus. During the course of the song, the latter transformed themselves into a weird armoured vehicle resembling a tank, while Mlle. Flory warbled:

There's one they do ''Somewhere in France''

They do it in the army,

They dance it in the ranks,

The last thing out,

They learnt it from the ''Tanks.''

Come and do the Tanko!

I'll teach you the Tanko;

Life is nothing but a blank oh!

Till you have learnt it,

It's quite easy when you once begin,

It will teach the Kaiser and Co

We know how to win

When they see us dance the Tanko

The poet Siegfried Sassoon 1886-1967), who had had experienced at first hand the horrors of war on the Western Front, was famously outraged by 'The Tanko.' He wrote bitterly:

I'd like to see a Tank come down the stalls,

And there'd be no more jokes in music-halls

To mock the riddled corpses round Bapaume.

These evocative Gorham 18-pounder shrapnel shells are truly products of their time; light-hearted reminders of a world in turmoil.