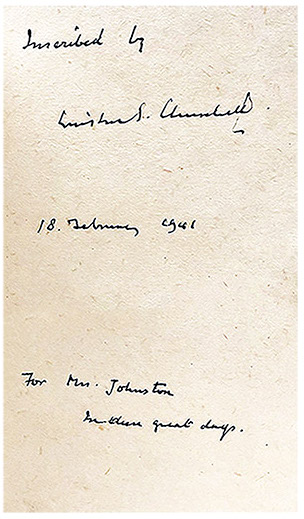 8vo (7 volumes). Original blue cloth, original unclipped dust jackets; Into Battle with light foxing to fore-edge, jacket with 2-inch-square loss head of spine, 1-inch-square loss at upper left corner of the front jacket panel; The Unrelenting Struggle with light foxing to fore-edge, jacket lightly toned, minimal loss near the upper right corner of front jacket panel; other volumes with only minimal shelfwear. The contents are fine, with very light scattered foxing to the fore-edge only.

FIRST ENGLISH EDITION PRESENTATION SET INSCRIBED BY CHURCHILL on the second front free endpaper of Into Battle: "Inscribed by Winston S. Churchill, 18 February 1941, For Mrs. Johnston, In these great days.”

Winston Churchill, in January 1941, visited Edinburgh and Glasgow to assess bomb damage from the Blitz, in the company of FDR’s emissary Harry Hopkins, who’d been sent to assess Churchill and Great Britain’s chances against the Nazis. The two men were escorted by Scotland's Regional Commissioner for Civil Defense, Labour politician Tom Johnston, founder and editor of the radical magazine Forward. On the evening of 29 January, Johnston hosted a dinner for Churchill and Hopkins at Glasgow’s Station Hotel. At dinner’s end, Hopkins rose and famously delivered these words to Churchill: “I suppose you wish to know what I am going to say to President Roosevelt on my return. Well, I’m going to quote you one verse from the Book of Books in the truth of which Mr. Johnston’s mother and my own Scottish mother were brought up: ‘Whither thou goest, I will go; and where thou lodgest, I will lodge: thy people shall be my people, and thy God my God. Even to the end.’” According to those present, Hopkins' speech left Churchill in tears. “The words seemed like a rope thrown to a drowning man” Churchill’s physician, Lord Moran, wrote in his diary. Churchill appointed Tom Johnston Secretary of State for Scotland on February 12, 1941. Into Battle was published on February 6, 1941. Once Churchill had copies in his possession, he apparently signed this volume, which is, in fact a second printing of the first edition (reprinted in the month of publication). His inscription is distinctive and, in retrospect, deeply resonant. “For Mrs. Johnston” is inscribed far down the page, not at the head. It appears to be more a reference to Hopkins’s eloquence than an actual presentation inscription to, say, Tom Johnston’s wife, Mrs. Margaret Johnston, or to Johnston’s mother, for that matter. The additional final phrase, “In these great days,” is most uncharacteristic for Churchill and unique to this inscription; Churchill seems never to have employed it again. The words certainly capture Churchill’s sea-change in mood following Hopkins’ speech in the midst of what were, until then, very dark days indeed.