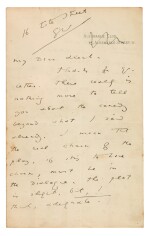 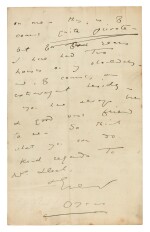 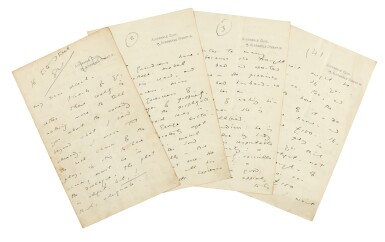 WILDE | Autograph letter signed, to George Alexander, outlining the plot of The Importance of Being Earnest, 1894

WILDE | Autograph letter signed, to George Alexander, outlining the plot of The Importance of Being Earnest, 1894

PROVIDING AN ACT-BY-ACT SUMMARY OF HIS NEW PLAY, WHICH BECAME THE IMPORTANCE OF BEING EARNEST, explaining that "the real charm of the play, if it is have charm, must be in the dialogue", outlining the plot in Three Acts ("...act I. Evening party 10 p.m. Lord Alfred Rufford's rooms in Mayfair arrives from country Bertram Ashton his friend: a man of 25 or 30 years of age his great friend..."), predicting the result will be "Royalties for a year for the author manager credited with writing the play", asking for £150 for first refusal to allow him to "go away and write it", promising the script by October and alerting him to American interest in a play from him, his final paragraph admitting his need for money ("...Of course I am extravagant, but a great deal of my worries come from the fact that I have had for three years to keep up two establishments, my dear mother's as well as my own..."), 16 pages, 8vo, headed stationery of The Albemarle Club corrected to "16 Tite Street, SW", [?July 1894]; in collector's folding box and red morocco gilt slipcase; light spotting, some dust-staining to final page

"...I think an amusing thing with lots of fun and wit might be made..."

THE FIRST SCENARIO FOR THE IMPORTANCE OF BEING EARNEST, providing a remarkable insight into the early development of Wilde's final comic masterpiece. In July 1894, when this letter was almost certainly written, Wilde was at the height of his success as a dramatist. Lady Windemere's Fan and A Woman of No Importance had both had long runs in the West End and he had recently finished An Ideal Husband for the Haymarket Theatre. George Alexander was manager of the St James's Theatre and had produced Lady Windemere's Fan. He was to accept Wilde's proposal for this new play: not only did he produce The Importance of Being Earnest, but he advised Wilde on revisions to the script and himself played Jack Worthing. Once Alexander had agreed his advance Wilde took himself and his family to Worthing, where he began the first draft of the play (the manuscript of which is split between the Morgan Library and the British Library) in August 1894.

This letter therefore provides a remarkable early view of Wilde's last and most enduringly popular play, revealing the extent to which core plot and structure were already formed before he began the first draft. Wilde describes a first act in which Bertram Ashton (later of course Jack/Earnest Worthing) admits his double life to his friend Lord Alfred Rufford (Algernon Moncrieff): "he has a ward etc., very young and pretty. That in the country he has to be serious etc. That he comes to town to enjoy himself, and has invented a fictitious younger brother of the name of George - to whom all his misdeeds are set down." He also sets out how a personal item inscribed with this false name forces "Bertram" to reveal his duplicity - although we here discover that the cigarette-case scene nearly played out with a handkerchief. Act II, similarly, follows the finished play in its essentials, with Alfred pretending to be the miscreant brother in order to woo Bertram's ward (here named Mabel Harford). Act III is, Wilde admits, less fully formed but we already have the confusion over the two girls engaged, they think, to the same man; the objections of Lady Bracknell (originally a Duchess); and the resolution provided by Miss Prism "who had in the early days been governess to the duchess, sets it all right, without intending to do so".

There are of course elements of the play that are missing at this early stage. There is no handbag, for example; Alfred/Algie does not have his own fictional friend - Bunbury - to parallel Earnest; and Wilde has not yet decided exactly how the final act was to resolve itself. Only Miss Prism ("Governess of course dragon of propriety") has her final name so of course we do not have the Earnest/Ernest pun. Nevertheless, the scenario contains many flashes of wit that capture the play's inimitable tone. When Mabel (renamed Cecily in the finished play) discovers her new fiancé is not a reprobate she promptly breaks off the engagement, until he "promises to be a bad husband, so as to give her an opportunity of making him a better man." Similarly, "The simple fare at the Savoy; the quiet life in Piccadilly; the solitude of Mayfair" is prescribed to cure Bertram's respectable life in the country.

The play went through extensive revisions in the months that followed. The first draft was in four acts but Alexander encouraged Wilde to reduce them to three - which, as this letter shows, had been Wilde's original intention. The play opened on 14 February 1895 and was, at first, just the success that Wilde had predicted the previous July. However, Wilde's own life was by this time spiralling out of control. He was himself of course no stranger to the double life and his claim in the current letter that his financial troubles resulted from the cost of maintaining his mother's household was at best a half-truth: the lavish spending of his lover, Lord Alfred Douglas, was the major drain on his finances. By the summer of 1894 the feud between Lord Alfred Douglas and his father, the Marquess of Queensberry, was already well advanced, but it came to a head early in 1895. Queensberry was prevented from attending the premiere of The Importance of Being Earnest, where he had intended to interrupt Wilde's curtain-call with a bouquet of rotten vegetables, but only two weeks later Wilde received Queensberry's card accusing him of sodomy. By May Wilde was in prison for Gross Indecency and his plays were off the stage.

WILDE | Autograph letter signed, to George Alexander, outlining the plot of The Importance of Being Earnest, 1894
Lot Closed
Lot 169