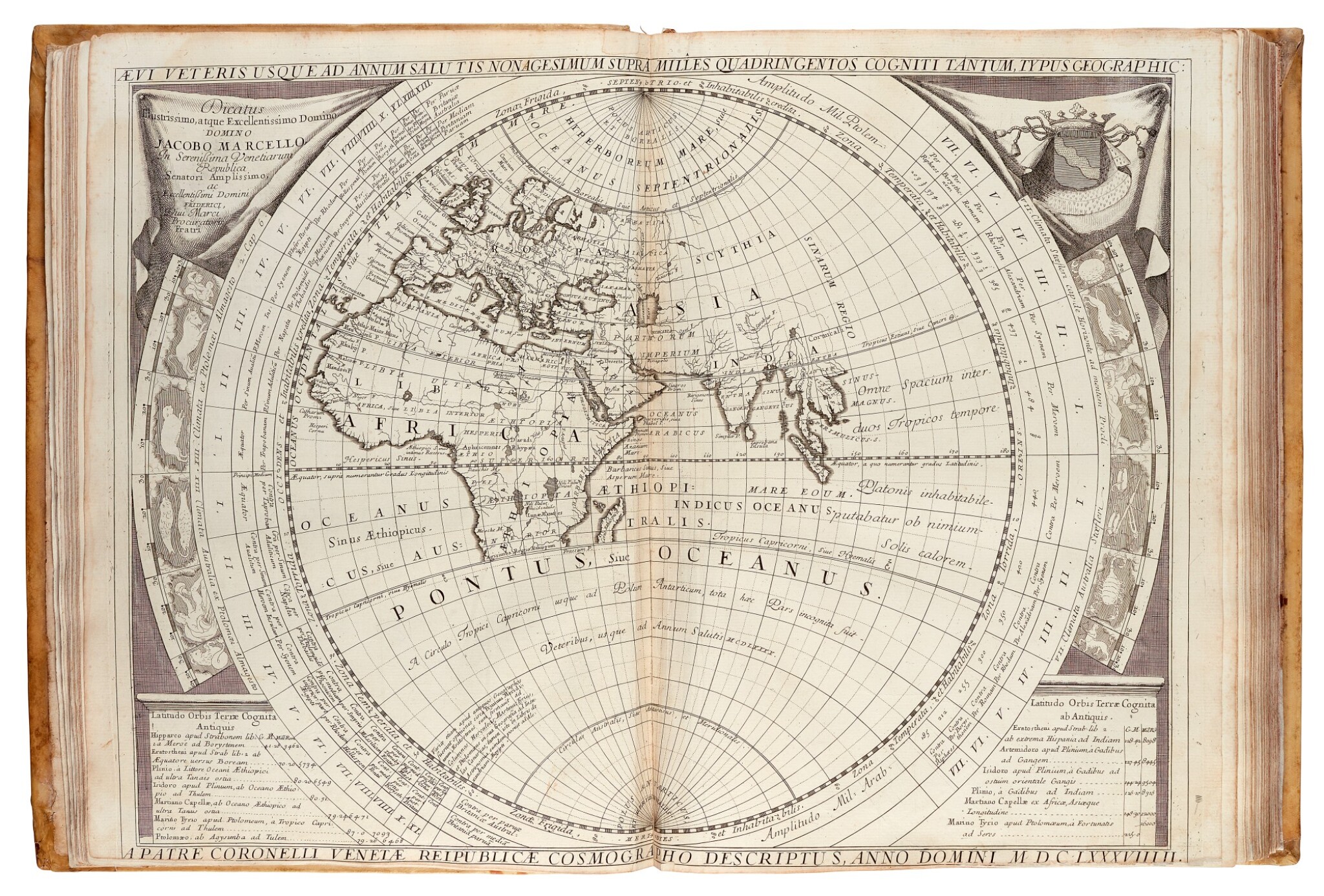 A fine example of the Atlante Veneto by Vincenzo Coronelli, “one of Italy’s most illustrious cartographers” (Shirley).

The work was intended as an extension of Blaeu’s Atlas Maior. It is no mere collection of maps, but rather “a compendium of geographical, cosmographical, and scientific information... on contemporary Italian science and geography” (Scammell). The present work includes Coronelli’s important two sheet maps of the continents, and the polar calottes from his 42-inch globe. Also included are a complete set of the maps of Chinese provinces (seven in total), together with the striking two sheet map of China. The maps of North America show the Mississippi with La Salle’s recent explorations at its mouth in 1681-1687; the extent of French ambitions is reflected in the title “Canada - Nuova Francia” over most of the eastern half of the continent. As well as maps, the first volume includes several of Coronelli’s celebrated naval plates, many with the separately-printed “Farnese” borders especially commissioned by Coronelli’s patron, Ranuccio II Farnese, Duke of Parma.

A Minorite friar, cosmographer and cartographer, Coronelli (1640-1718) founded the first geographical society, the Accademia degli Argonauti. His reputation rests not only on his atlas output but also on his production of monumental globes. In 1678 he built a pair of globes for the Duke of Parma that attracted the attention of the French ambassador, César d’Estrée, who subsequently invited Coronelli to Paris. There Coronelli built the pair of gigantic, 15-foot globes which he presented to Louis XIV in 1683 and which would bring him fame throughout Europe. Upon his return to Venice, Coronelli was contracted by Jean-Baptiste Nolin (1657-1725) to publish a replica of these globes, scaled down to a diameter of 3.5 feet, and financed through subscription by members of the Argonauti. In his celestial globes, he designed 83 constellations and a catalogue of 1902 stars. Of his terrestrial globes, Stevenson says that he omitted nothing of interest to geographers, navigators and explorers: “He added a rather unusual number of legends, explanatory and informative in character, but never seemed to crowd the space which he had at his disposal. So exquisitely engraved were his maps that he was able to avoid the appearance of confusion noticeable on other globes of the century”.