Tell Me a Story: The Art of American Illustration | Property from the Collection of Maurice and Marcia Neville 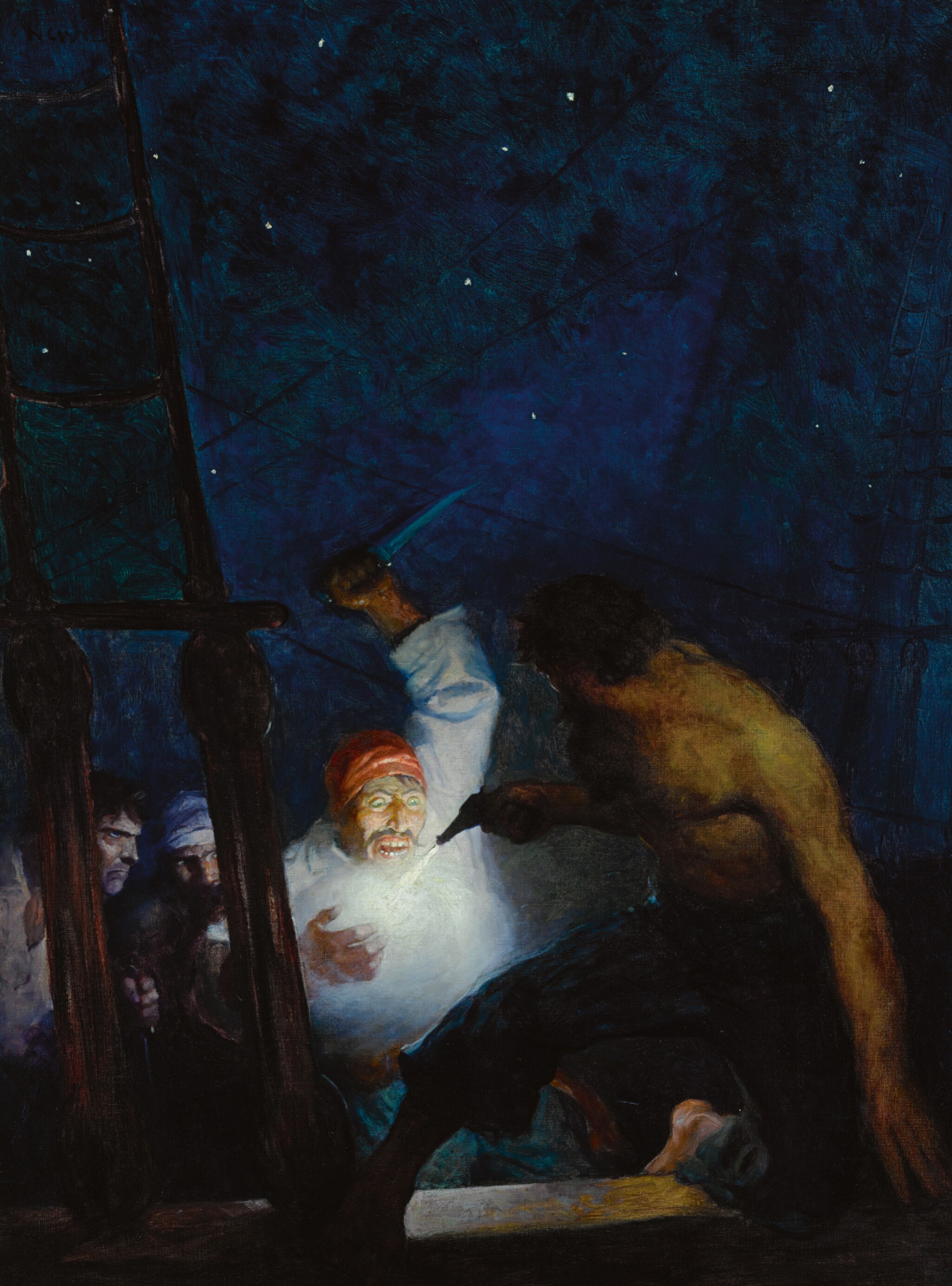 Tell Me a Story: The Art of American Illustration | Property from the Collection of Maurice and Marcia Neville

Property from the Collection of Maurice and Marcia Neville

AYRTON'S FIGHT WITH THE PIRATES

Acquired by the present owners from the above, late 1970s

Ayrton’s Fight with the Pirates is one of 17 works N.C. Wyeth painted to illustrate a 1918 edition of Jules Verne’s 1874 novel L'Île mystérieuse (The Mysterious Island). Verne’s novel tells the tale of five Americans who—seeking to escape the destruction of the Civil War—become shipwrecked on an uncharted island in the South Pacific. The present work depicts a climactic moment in the tale when Tom Ayrton—having just been found also shipwrecked on a nearby island by the protagonists—is kidnapped by pirates. As a cross-over sequel to Verne’s most famous work, Twenty Thousand Leagues Under the Sea, The Mysterious Island features many of the author’s most popular characters including Ayrton, who also appears in In Search of the Castaways.

Wyeth executed the present work at the height of the period that is today known as the Golden Age of Illustration. By this time, Wyeth had achieved success as an illustrator after studying at Howard Pyle’s eponymous school and selling his first drawing to The Saturday Evening Post in 1903. He gained further recognition when he received a commission from Charles Scribner's Sons to provide the accompanying images for Robert Louis Stevenson’s Treasure Island in 1911, after which he became a highly sought-after illustrator of the most prominent magazines and celebrated novels of the day.

Wyeth was particularly respected for his ability to conjure a spirit of adventure in his images, allowing them to not only complement but also to enhance a narrative. This composition is fittingly dynamic, featuring strong diagonals of the figure’s arms as well as the rigging of the ship that enliven the scene. The drama is also emphasized by the artist’s skillful use of chiaroscuro. Pirates were especially popular as subject matter during this period, and they appear often in the work of Pyle. Wyeth’s admiration for Pyle’s tutelage is revealed here not only through the work’s subject but also through the careful attention to authentic details in elements such as the costumes of the pirates and the particulars of the ship. However in his best works, Wyeth undoubtedly draws from his own vivid imagination to achieve an aesthetic that is undeniably all his own. As Douglas Allen explains, “there is a heroic treatment of anatomy, for example, that makes a Wyeth masculine type so gloriously strong and virile—you look for a new discovery and technique—then that romance of color, of wave, of cloud—of those authentic, yet fascinating ships that toss or float over seas, fabulously stormy or credibly calm” (N.C. Wyeth: The Collected Paintings, Illustrations and Murals, New York, 1972, p. 140).