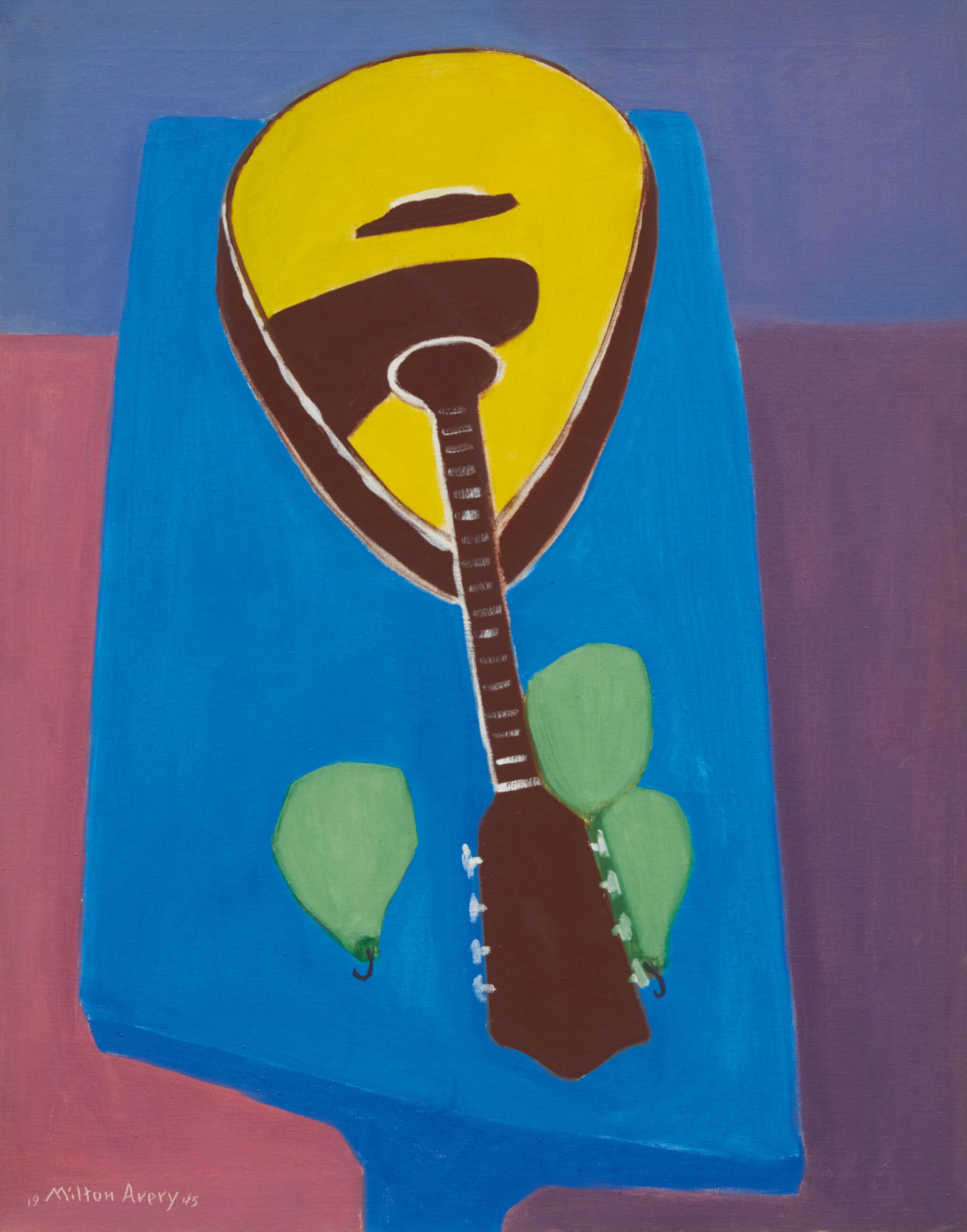 Private collection, probably acquired from the above

Mark Borghi Fine Art, New York, acquired from the above, 2006

Milton Avery painted Mandolin with Pears in 1945, by which time his mature style had fully emerged. Color became his primary means of expression and he sought to reduce figures, landscapes, and still-life objects to their simplest forms. It was during this time that his wife, Sally, noted: “his spirits soared and his paintings blossomed. His color became clearer, sharper, and higher keyed, his shapes more stark and hard edged” (as quoted in Thomas Gibson Fine Art, Milton Avery: Figures from the Forties, London, 1981, p. 9). This dramatic change in style has been attributed to Avery’s professional affiliation with the French art dealer Paul Rosenberg, which began when he joined Rosenberg’s New York gallery in 1942. Rosenberg facilitated Avery’s creative experimentation by exposing him to the works of the modern European artists that he also represented, including Georges Braque, Henri Matisse and Pablo Picasso.

In Mandolin with Pears, Avery presents each compositional component as a single area of brightly saturated color. This technique, compounded with Avery's reduction of extraneous details and the slanted perspective he employs, limits the sense of depth within the picture plane. Similar to the European Modernists, he reinvents the classical still-life as a two-dimensional design of color and pattern. Avery’s admiration for Picasso, specifically, is on display here in both his subject matter and simplification of form. Mandolin with Pears also attests to the artist’s engagement with modern literature. Avery was particularly fond of the poet Wallace Stevens and often quoted aloud from his poem “The Man with the Blue Guitar.” Stevens’ stanzas, which were inspired by Picasso’s 1903 Blue Period masterpiece The Old Guitarist, comment on the interrelationship of life and art and the power of creativity to alter one’s reality. As such, images of musicians and musical instruments became Avery's personal symbols of this capacity, and began to appear frequently throughout his body of work.

While Avery never fully abandoned his commitment to representation, in works like Mandolin with Pears he does not seek to capture his subject naturalistically. Avery’s intent to interpret the representational world through color and form earned him a reputation as among the earliest American practitioners of chromatic abstraction. He is considered today an important precursor to such iconic painters as Richard Diebenkorn, Mark Rothko and the proponents of the Color Field movement, who would go on to push his experiments with the expressive power and structural function of color fully into the nonobjective.