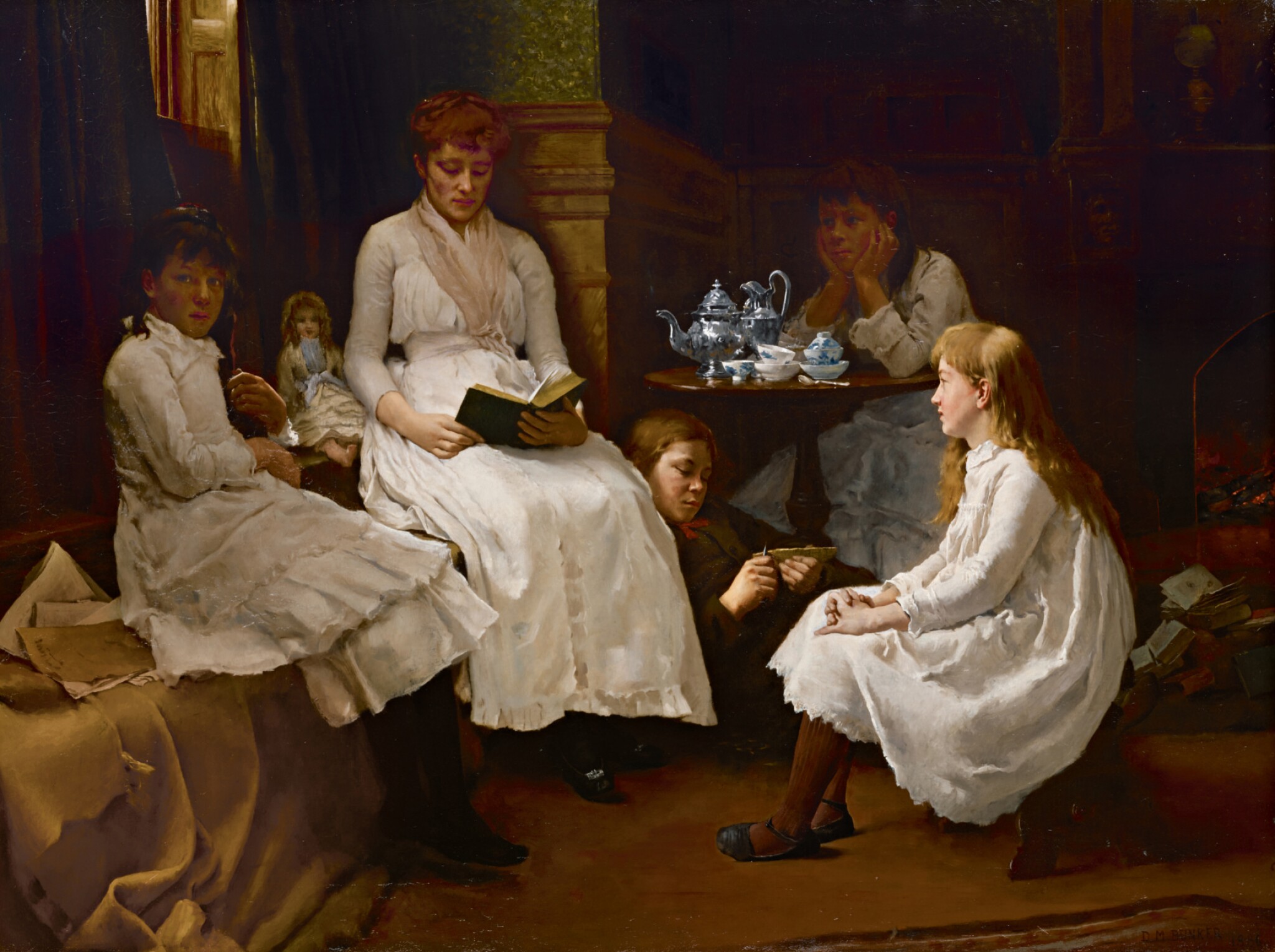 A WINTER'S TALE OF SPRITES AND GOBLINS

Simmons University, Boston, Massachusetts (gift from the above)

Private collection, circa 2000 (acquired from the above)

Dennis Miller Bunker was respected as an extraordinary talent by his contemporaries such as John Singer Sargent, William Merritt Chase, Stanford White, Augustus Saint-Gaudens, and Isabella Stewart Gardner, yet it is only in the past thirty years that collectors, historians and critics have rediscovered his work. Of the 225 pictures Bunker painted during his decade-long career, only about 100 are presently known, many of which are included in the permanent collections of institutions such as The Metropolitan Museum of Art, the Museum of Fine Arts, Boston and the Isabella Stewart Gardner Museum. In 1978, the New Britain Museum of American Art organized the first major Bunker retrospective since the 1891 memorial exhibition held at the St. Botolph Club in Boston, following Bunker’s untimely death of meningitis at age 29. From his academic portraits, to his Barbizon inspired tonalist landscapes, to the impressionistic canvases of his final years, Bunker’s art reflects the rapidly changing artistic tastes of the tumultuous time in which he lived. Painted in 1886, A Winter’s Tale of Sprites and Goblins gracefully reveals the artist’s mastery of tone, light and figural composition.

A driven perfectionist, Bunker meticulously considered every detail of his paintings, often reworking his compositions until he was satisfied. After almost six months of work, Bunker finally completed A Winter’s Tale of Sprites and Goblins in March of 1886. It is the artist’s largest known composition. The present work was shown shortly after its completion at the eighth annual Society of American Artists exhibition at The Metropolitan Museum of Art, where it was praised by critics for its arrangement, coloring, and scale. It is believed that the work was not commissioned, as it was offered for sale by the artist at the Society’s show and presumably sold to the Cabot family of Boston. One can speculate that the subjects of the present work may have been the family of one of the artist’s friends, but their identities remain unknown.

The title reveals that the subject of the work is story time. A group of children has gathered—some of them engaged, some distracted—to hear the tale, each contributing to a dynamic scene. The title of the painting references the play by William Shakespeare, “The Winter’s Tale,” hinting at the story that is being read and strengthening the narration that underlies the composition.

The rich details Bunker includes such as the delicate silver and porcelain tea set on the table reveal that the family has some level of affluence, while also contributing to the complexity and sophistication of the composition. Perhaps inspired by the Belgian painter Alfred Stevens, Bunker depicts a serious scene that also introduces an element of romanticism. However, Bunker’s subjects are not upper-class Parisians in opulent settings like that of Stevens’, but rather an American middle-class family in the domestic sphere.

A Winter’s Tale of Sprites and Goblins therefore synthesizes Bunker’s formal academic training with the quaint domesticity of late 19th century America. A thoughtful and multifaceted work, it is a unquestionable testament to Bunker’s reputation as the most influential figure painting instructor of mid-1880s Boston, and stands among the artist’s most successful figurative works.