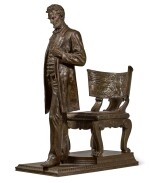 We are grateful to Dr. Henry Duffy for his assistance in cataloguing this lot.

Congressman Richard Young, Brooklyn, New York, 1928 (acquired from the above)

Union League Club, Brooklyn, New York, 1928 (gift from the above)

Lincoln Mutual Savings Bank, before 1954 (acquired from the above)

Washington Mutual Bank, New York, 1984 (acquired from the above)

Acquired by the present owner, 2002

Augustus Saint-Gaudens, the most celebrated American sculptor of his day, originally created Abraham Lincoln: The Man (Standing Lincoln) as a larger-than-life sculpture to adorn Chicago’s Lincoln Park. Saint-Gaudens was awarded the commission in 1883, largely due to the success and popularity of his earlier Civil War-related projects such as the Farragut Monument in Madison Square Park and the Sherman Monument in Grand Army Plaza, both in New York. The Lincoln Park monument was formally dedicated on October 22, 1887 to great critical and popular acclaim. Beginning in 1910, the artist’s widow, Augusta, authorized the casting of commercial-sized reductions of the original monument. Extant correspondence, however, reveals that Saint-Gaudens was interested in reproducing his Standing Lincoln in a smaller scale during his lifetime, as by the 1890s the production of smaller versions of his monuments had become a common part of his practice, affording the artist a more regular source of income in between more sporadic public commissions.

The reductions of Lincoln: The Man, of which the present work is one, stand at 40 ½ inches high and were cast in an edition of approximately 17. Augusta first engaged Tiffany Studios in New York to create at least six examples, but moved production to Gorham Foundry in 1917, when Tiffany increased its rates. Augusta oversaw the production of the statuettes with shrewdness and remarkable foresight, keeping precise records, employing only the artist’s favored founders and deftly striving to sell examples to public institutions such as The Metropolitan Museum of Art. Her advocacy on behalf of her husband’s work profoundly contributed to their resulting quality. As Thayer Tolles explains, “All casts [of Lincoln: The Man], whether produced by Tiffany or by Gorham, exhibit a remarkable similarity in construction and surface appearance, evidence not only of their having been produced from a single bronze pattern but also of Augusta Saint-Gaudens’s discerning commitment to quality control” (“Abraham Lincoln: The Man (Standing Lincoln): A Bronze Statuette by Augustus Saint-Gaudens,” The Metropolitan Museum Journal, vol. 48, 2013., p. 232). Though the present work was cast by Gorham in 1917, it is probable that the foundry sent it to Tiffany Studios upon completion to be sold. The authorized estate casting of Saint-Gaudens’ works, including the Lincoln statuettes, stopped in the early 1920s, contributing to the infrequency with which they appear on the market today. Other examples are found in the collections of The Metropolitan Museum of Art, New York, Yale University Art Gallery, New Haven, Connecticut, the Detroit Institute of Art and the Fogg Art Museum at Harvard University, Cambridge, Massachusetts.

Saint-Gaudens prepared assiduously in advance of beginning to model Lincoln: The Man, closely examining the 19th President’s speeches and personal writings, in addition to studying contemporary photographs of him, including several taken by Matthew Brady. Saint-Gaudens also recalled his own memories of the legendary leader. Indeed, the artist encountered Lincoln in person on two occasions, once in New York City in 1861 just before he assumed the office of the Presidency, and again four years later during his funeral procession. Of the latter meeting, the artist remembered, “After joining the interminable line that formed somewhere down Chatham Street and led up by the bier at the head of the staircase, I saw Lincoln lying in state".".". and I went back to the end of the line to look at him again. This completed my vision of the big man, though the funeral, which I viewed from the roof of the old Wallack’s Theater on Broome Street, deepened the profound solemnity of my impression” (quoted in Ibid., p. 225). Saint-Gaudens finally began to construct on the sculpture during the summer of 1885 while spending time at his home in Cornish, Hampshire, and recruited a six-foot-four local farmer named Langdon Morse to serve as the likeness for Lincoln’s well-known willowy frame. He also referenced a life mask of Lincoln’s face and casts of his right and left hands taken by the sculptor Leonard Wells Volk in the spring of 1860, creative decisions that enriched the authenticity the finished work exudes.

The clear reverence with which Saint-Gaudens viewed Lincoln is made clear through this striking depiction of him. Though Lincoln had attained nearly mythical status by this time, over 20 years after his assassination, Saint-Gaudens strove to capture the complexities of his humanity. In both the original monumental version and the subsequent reductions, he portrays Lincoln as a contemplative, perhaps conflicted figure, his head bowed in thought as his left hand seemingly absentmindedly strokes the lapel of his coat in front of a richly decorated Chair of State, which the artist based on the Throne of the Priest (ca. 330 B.C.) in the Theater of Dionysos in Athens. Ultimately, explains Tolles, “Saint-Gaudens presented Lincoln not as a man in action, but as a man in an intensely private, introspective moment, preparing to lift his head to address his audience… One contemporary noted that Lincoln’s ‘face was not exactly that of Narcissus” and that, nonetheless, and despite Lincoln’s lanky ungainliness, Saint-Gaudens had successfully solved “the problem of being very real and yet indicating grandeur of character.’ In other words, he had presented Lincoln as an individual and a hero, both homely and majestic, as a thinker, an orator, a leader, and a defender of liberty” (Ibid., 227).