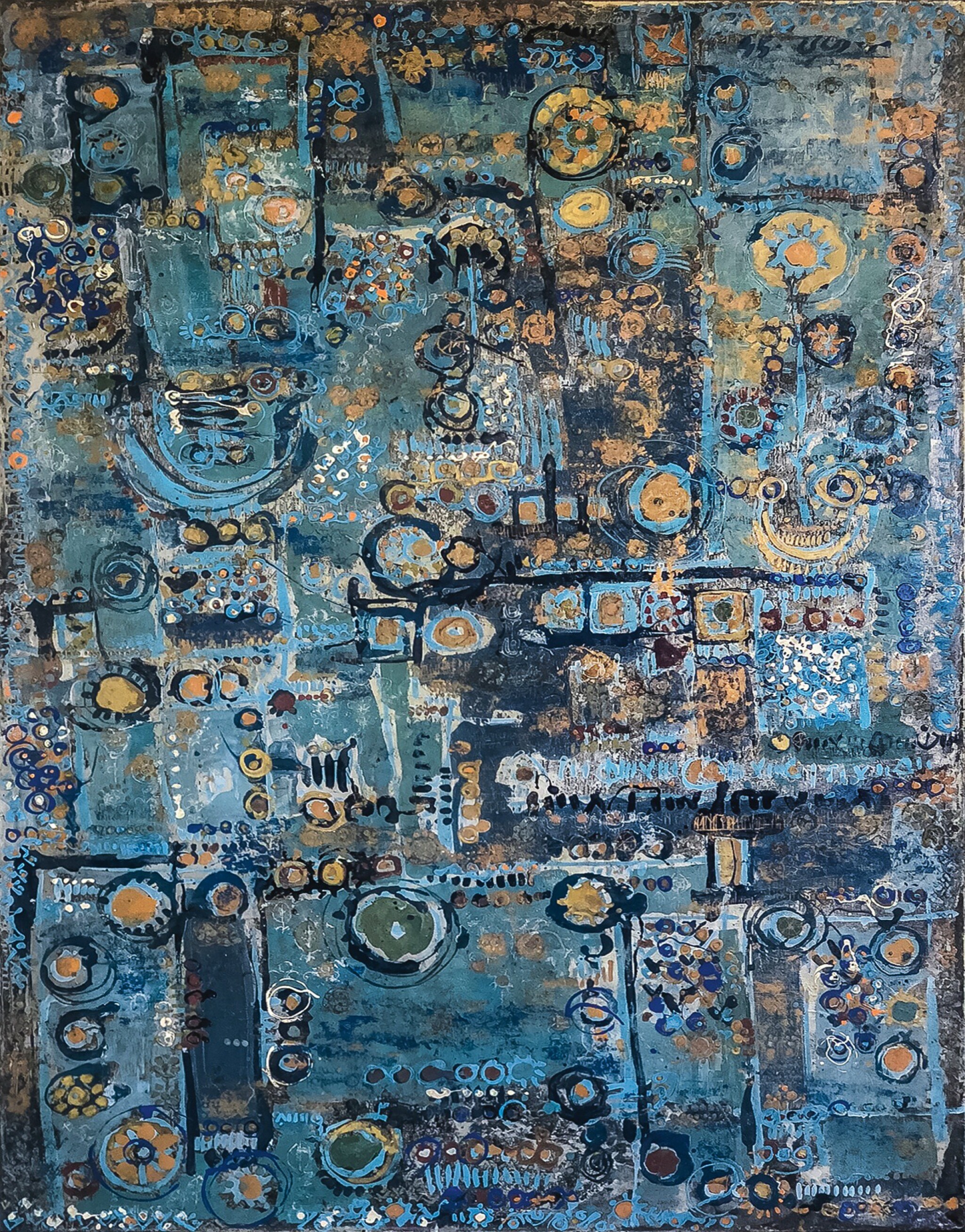 This work is in very good condition. There is no restoration apparent when viewed under the UV light.

The catalogue illustration is fairly accurate. The blues tend towards a green-teal colour, the gold is not as pronounced, and the overall tonality is darker in the original work.

“Massoud Arabshahi’s place in the pantheon of contemporary Iranian artists is difficult to describe. When I look at Arabshahi’s oeuvre, I see an artist who regards his cultural and historical heritage with a sense of awe, wonderment and admiration. Turquoise Seljuk tiles, early calligraphic scripts, ancient frescos are all collectively and simultaneously incarnated in his paintings. This reenactment of an archaic world is the representation by a contemporary artist of his own past history, not through plagiaristic impulses to forge a superficial identity but with a deep and genuine commitment. Arabshahi was also fundamentally a modernist, and although during the early part of his career modern works lacked followers, the value of a true artist like him who practiced without pursuing fame or fortune, was a rare phenomenon. Despite his significant legacy, Arabshahi has not been studied or appreciated enough. He has been one of the most independent-thinking, relevant, and authentic artists of the past 60 years in Iran. As a genuine pillar of the Saqqakhaneh movement, he deserves a lasting recognition.” (extracted from Aydin Aghdashloo, ‘Artists Profiles')

Massoud Arabshahi, born in Tehran in 1935, studied art throughout his childhood and as he was growing up. In 1956 he entered art school, by 1960 working in the graphics department of the Ministry of Culture. At the School of Decorative Arts in Tehran he acquired a passion for ancient motifs, mythology, patterns from Sumerian and Assyrian civilisations, especially the reliefs from ancient Elam and Egypt. By 1964 his engravings were shown at the University of Tehran, highlighting his fascination with ancient patterns and motifs, often combined with turquoise and azure colours. In his long career, Massoud Arabshahi’s vision and passion for his native heritage inspired not just his followers and collectors but also other artists, earning the respect and admiration of the cognoscenti. His body of work functions as an archive of Iran’s rich cultural treasures, and a diary of his life’s journey which ended on 16 September 2019.

Sotheby’s is proud to be presenting a rare and unique work from 1965 by the artist, from a series of just four which highlight the peak of his early artistic production, featuring the typical Saqqakhaneh characteristics that marked him as one of the greatest exponents of this school. The deep blue colour palette and heritage-inspired motifs surely make this a most sought after work, one that will enhance the quality of any collection of modernist art.