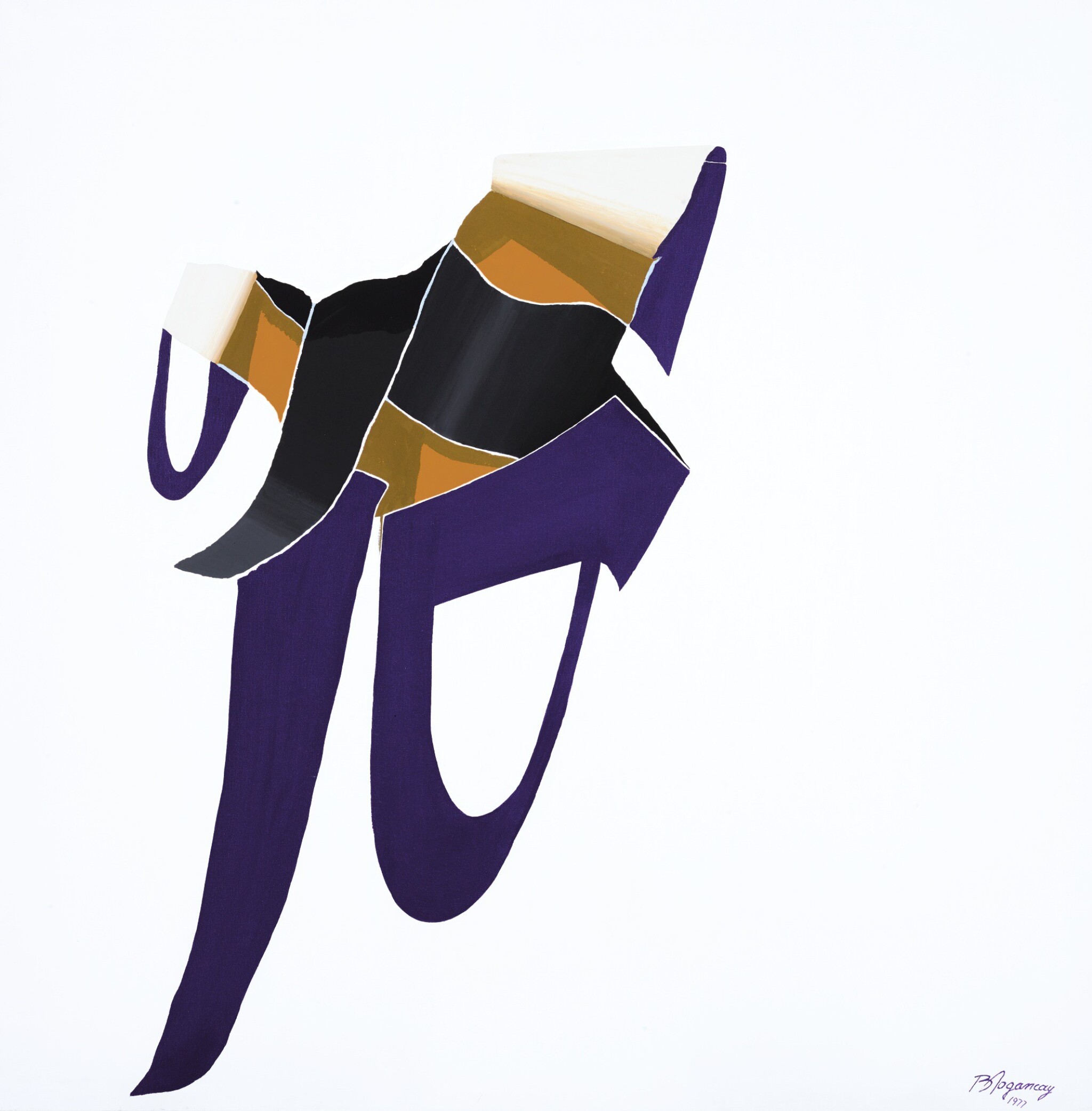 This work is in very good condition. Some very fair handling marks across the left, upper end right edges. A 8cm hairline singular faint craquelure to the upper left. Some faint discolouration to the centre left edge. A minor and light surface abrasion to the upper centre, most probably inherent. There are two pinpoints of paint loss in the mid central part of the white canvas. There is no restoration apparent when viewed under the UV light.

The catalogue illustration is accurate; however the brown tonalities are more vibrant and there is more contrast overall in the original work.

Private Collection, Stockholm (acquired directly from the above)

"To put…topsy-turvy and contradictory elements together into a convincing three-dimensional image is miraculous. To do it without resorting to texture or impasto or brushstroke is even more ingenious, for Dogancay manages to maintain a cool, even, undifferentiated surface, which emphasizes the violent, chaotic, ambiguous subject content…Throughout his career Dogancay has been concerned with a tactile picture plane, from which the object project into the space of the viewer.”

Purple Stocking by the Turkish artist Burhan Dogancay is a beautiful example from the artist’s most coveted and admired series, the Ribbons. The paintings render a trompe l’oeil collage effect featuring torn and ripped paper shreds that seem to puncture through the composition, projecting forward and emitting Islamic calligraphy with a careful interplay of geometric forms. The traditions of the East where calligraphers used script to depict images of animals, plants and objects are employed by the artist in the present work, telling a story of the past and the presence referencing street culture and elements of his personal imagination, creating a unique work in each painting.

As Roy Moyer has summarised in his book, Dogancay in 1986, “The hued ribbons are colored on the outside and white on the inside. This means that Dogancay is no longer experimenting with an image lying flat on the ground. He employs the most complex type of perspective conceivable on a two-dimensional surface: white (which advances toward the viewer) is now used for the back side of the ribbons which should visibly recede; primary colour (which established the middle ground) is now used for the front of the ribbon which should advance towards the viewer; and black (which recedes) is now used to lie in the middle ground as a shadow on top of a color.” (Roy Moyer, Ed., Dogancay, New York 1986, p. 62)

Travelling around Anatolia with his father, Adil Dogancay, who was a cartographer and an artist, Burhan Dogancay practiced drawing in the fields alongside him, experimenting with light, shadow and perspective. After completing his law degree in Turkey, he then travelled to Paris for his doctorate in economics where he took the opportunity to study the Great Masters from the canon of art history. Dogancay's move in 1962 as a Turkish diplomat to New York was a life-changing moment for his future artistic career. Soon after his move, he quit his job and dedicated himself solely to art.

In the early 1960s, at a time when the world was going through drastic political and social changes, Dogancay turned his attention to the urban walls which bore witness to the emotions and opinions of the people. Written in graffiti on torn posters, they created a live platform for discussion. It was a freedom of speech at its best and the liveliness of the walls would become the centrepiece of Dogancay's artistic life, spanning more than seventy years. Dogancay would say in 1983, "I doubt I ever would have become so obsessed with walls if I hadn't come to New York." (The artist cited in: Roy Moyer, Ed. Dogancay, New York 1986, p. 39).

Light, colour, shadow and depth, concepts which troubled artists throughout history were mastered by Dogancay whose compositions were striking, powerful and mesmerizing. Hence, it comes as no surprise that his paintings are in the collections of leading art museums around the world including the Museum of Modern Art, the Metropolitan Museum of Art, the Guggenheim Museum in New York and the National Gallery of Art in Washington, D.C.