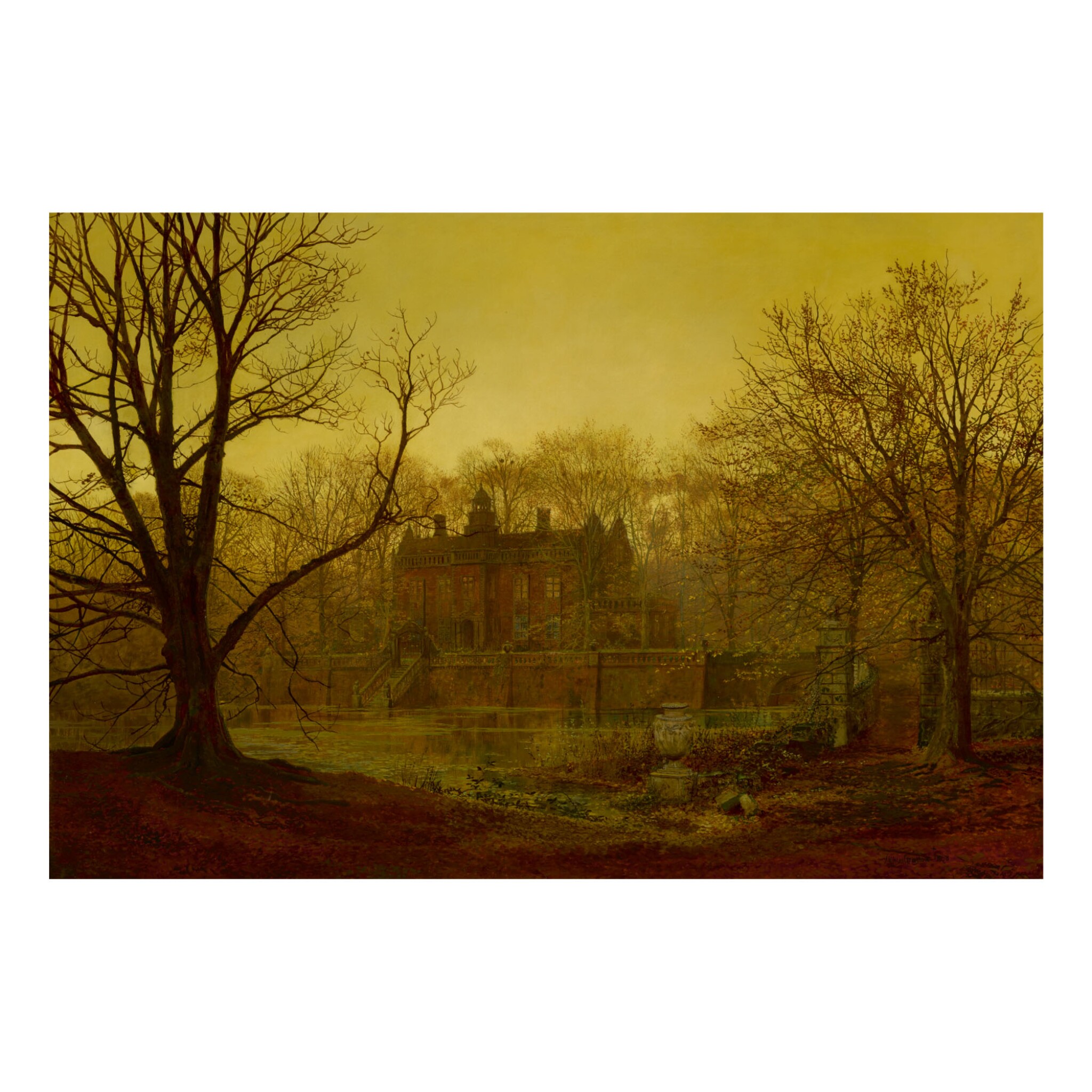 The following condition report was kindly provided by Simon Parkes Art Conservation, Inc.: Not examined out of the frame. This work has been lined with a non-wax adhesive. The paint layer is clean and varnished. No restorations are clearly visible under ultraviolet light, except for a handful of isolated spots in the lower left corner. In the sky, there is a very lightly applied glaze that reads slightly darker under ultraviolet light, but this appears to have been applied by the artist himself, since some of the branches of the trees are painted on top of it. The work should be hung as is.

A Yorkshire Home by John Atkinson Grimshaw is emblematic of the mystery, melancholy and nostalgia so often found in the artist’s work. The autumnal setting is a symphony in gold: the dark, seemingly empty house and surrounding land are bathed in crepuscular light. Viewed from the garden path at the far side of a small lake, the red brick house is Elizabethan in style with ornate gables and nineteenth century additions, including the bell tower. The textures of damp leaves, moss-covered stone and glassy still waters are overlaid with a lace-like effect of skeletal branches and the last leaves of autumn, and dusk has descended over another season.

Grimshaw explored the theme of country roads and homes lit only by November dusk or moonlight throughout the 1870s, a particularly prolific period for the artist. It was during this time that he, along with his wife Fanny and their four children, lived in Knostrop Hall, a rented seventeenth-century manor house near Leeds (fig. 1). Knostrop provided a remote, picturesque and moody setting for a number of Grimshaw’s compositions and influenced his work during this decade. The identity of the house in the present work remains mysteriously unknown, but it is Tudor style like Knostrop. A Yorkshire Home is one of a small group of works by Grimshaw from 1878-79 of the same home from various angles (one is in the Mercer Art Gallery, Harrogate).

Grimshaw’s paintings of the 1870s were influenced by the works of Alfred Tennyson, the celebrated Victorian poet. Biographer Alexander Robertson writes that Grimshaw’s “well-known love of Tennyson's poetry seems to be reflected in many subjects where night, overgrown gardens, and empty, mysterious houses are preferred to sunshine and more obviously inhabited dwellings" (Alexander Robertson, Atkinson Grimshaw, London, 1988, p. 35). Tennyson's poem The Deserted House of 1830, for example, like the present work, paints a haunting picture of an empty manor and evokes themes of the changing of seasons and the passing of time:

All within is dark as night;

In the windows is no light;

And no murmur at the door,

So frequent on its hinge before.

Close the door, the shutters close,

Or thro' the windows we shall see

The nakedness and vacancy

Of the dark deserted house.

Come away: no more of mirth

Is here or merry-making sound.

The house was builded of the earth,

And shall fall again to ground.