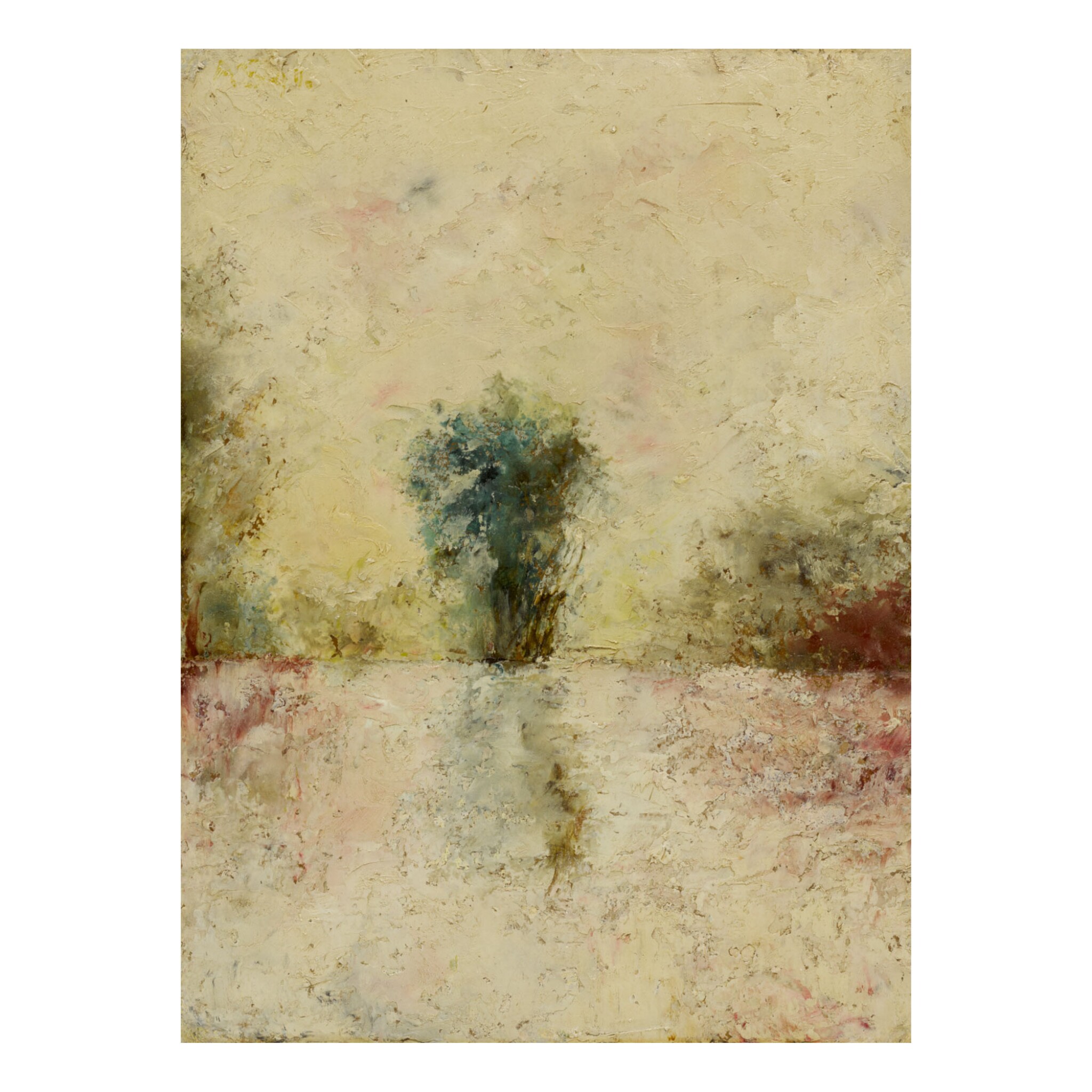 The following condition report was kindly provided by Simon Parkes Art Conservation, Inc.: Not examined out of the frame. This work on board is unreinforced on the reverse. The surface is slightly warped with a convex area in the upper right and a concave area around the tree in the center. The paint layer is stable. The work is clean and lightly varnished. Although some of the original pigment reads unevenly under ultraviolet light, the only retouches are in the four corners, and on the center of the bottom edge. There are some slightly lighter marks in the pale pink foreground on the right side and in the more magenta color on the left side that may correspond to retouches to some of the dark undercolor, but none fluoresce strongly under ultraviolet light.

August Strindberg was a polymath: a painter, poet, writer, playwright, photographer and alchemist. His career was as dynamic and turbulent as many of his most celebrated landscapes. Strindberg was equally fascinated with art and science, and his keen observation of nature had a profound effect on his written and painted work. In the last decade of the nineteenth century, Strindberg took brief, quiet refuge from his many artistic and scientific endeavors in the small Austrian town of Dornach, where he spent eight months with his second wife, Frida. Strindberg and Frida traveled to Dornach in November 1893 and settled in a little house on the estate of Frida’s grandfather. There they prepared for the birth of their first daughter, Kerstin, in May 1894. This period produced some of Strindberg’s most powerful, revealing and impressionistic landscapes (figs. 1 & 2), among them Översvämning vid Donau.

This was a relatively happy period in Strindberg’s life. He was surrounded by the picturesque Danube, so close to his home that he could hear the water lapping as he went to sleep. He ate well, read a lot and was surrounded by friendly people. On a later visit to Austria in 1896, Strindberg mused, "My impressions of Austria? Well I’m more at home here than in Sweden, and feel as though I was born here, for I’ve planted trees and brought forth a child here" (Letter to Count Fredrik Wrangel, September 22, 1896, quoted in Helen Sainsbury, "Plates," August Strindberg: Painter, Photographer, Writer, exh cat., Tate Modern, London, 2005, p. 96). On morning walks he took in the scenery and closely studied his natural surroundings, returning home with inspiration from this beautiful landscape. In Dornach he also experimented with photography. With his celestrographs (fig. 3), he attempted to photograph the night sky. He set up sensitized photographic plates, rather than a lens, to face the stars and left them out to expose. Of the celestrographs, David Campany writes, "what we see could be the heavens, or just a patch of ground, or mere photochemical stains. For Strindberg they were perhaps all these things at once, indivisibly: the infinite heavens and the earth, base material and the lofty representation, fact and wish” (David Campany, "Art, Science and Speculation: August Strindberg’s Photographics," August Strindberg: Painter, Photographer, Writer, exh cat., p. 115). This idea would become a central focus of the paintings from his Austrian period. The celestrographs, which are abstracted bursts of color that fuse various elements of nature, echo Strindberg’s painterly output from this year, the present work included.

The light, vast river, and verdant landscape of Austria provided new inspiration and a setting very different from the archipelago outside Strindberg’s hometown of Stockholm (Olle Granath, "A Writer’s Eye," August Strindberg: Painter, Photographer, Writer, exh. cat., p. 20-21). In Översvämning vid Donau, Strindberg depicts the Danube flooding its banks. The mammoth, ancient river overtakes the entire foreground, dominating the hint of shoreline at right and the trees at center, which rise above the tempestuous water. The present work is a stunning tableau of abstracted color and light, painted freely and confidently with a palette knife.

In November 1894, only a few months after Översvämning vid Donau was completed, Strindberg published an essay entitled "New arts! or the role of chance in artistic creation," which provides insight into his particular process of painting:

"I paint in my spare time. In order to be able to dominate the material I choose a middle-sized canvas or, preferably, a piece of board, so that I can finish the painting in two or three hours, for as long as my mood lasts. I am governed by a vague desire. What I have in mind is the interior of a shadowy forest, through which one can see the sea at sunset. Fine: with the palette knife I use for the purpose—I have no brushes!—I spread the paints across the card, mixing them together until I have a sort of rough sketch…A touch of the finger here and there, blending recalcitrant colors, merging and softening any harsh tones, thinning and blurring, and there’s the painting!" (quoted in "New arts! or The role of chance in artistic production," August Strindberg: Painter, Photographer, Writer, exh. cat., p. 134-35).

Strindberg begins with an impression of a landscape in his mind, a burst of light through a dark wood, or, in this case, the reflection of trees on the water, and lets the act of painting help form the composition. In the present work, the palette knife has given a rough texture to the river and sky, adding to the already rough nature of the board. This thickly painted surface contributes to the sense of constant motion and the overall drama of the composition. In this regard Strindberg was possibly influenced by Gustave Courbet, who utilized a palette knife to mix dark, deep blues and hints of white and create the effects of restless sea (see lot 433). Strindberg must have encountered Courbet at the Musée du Luxembourg or the Louvre (Camille Lévêque-Claudet, "Maintenant je lance mes tableaux un à un, on va m’établir en peintre," August Strindberg de la mer au cosmos, exh. cat., Musée Cantonal des Beaux-Arts, Lausanne, 2016-17, p. 24).

The palette knife also aided the artist in blending the soft yet contrasting colors of Översvämning vid Donau. Green, pink and yellow pigments are painted into one another, blurring the boundaries between land, water and sky. The surprising and innovative use of primarily yellow, pink and brown tones combined with almost an exact reflection of the trees on the river challenge the viewer’s perspective and make one question what is up and what is down. This lack of distinction between the four elements was very likely inspired by the paintings of Joseph Mallord William Turner, whose works in the National Gallery Strindberg must have encountered on his visit to London in 1893 (Camille Lévêque-Claudet, p. 24-25). Strindberg owned a color lithograph after Turner’s The Fighting Temeraire Tugged to her Last Berth to be Broken Up, 1838 (1839, The National Gallery, London, fig. 4). Turner, like the Swedish painter, merged the various parts of his landscapes and seascapes, unifying nature and light into swirling, painterly, romantic and energetic compositions.

The blended, Turneresque elements in Översvämning vid Donau also play into Strindberg’s scientific theories, which he explored in a number of writings in the 1890s. Strindberg believed in "monism," or the belief that all matter on earth is derived from the same source. He rejected the notion of a periodic table of elements and instead believed in primeval matter as the origin of all things, meaning all matter and organisms on earth can be interchanged or transformed into one another (he attempted to prove this by trying to make his own gold). Olle Granath, the curator of the 2005 Tate Modern exhibition writes, "It is quite conceivable that, swept up in the act of painting, Strindberg experienced himself as realizing his monism by raising a craft to the level of poetry, his painting reconciling earth, sea and sky into a single element" (Olle Granath, p. 23). Camille Lévêque-Claudet, the curator of the 2016 exhibition at the Musée Cantonal des Beaux-Arts de Lausanne also supports this idea, writing, "Strindberg establishes a new pictorial order just as he establishes a new monism, showing that everything can be found in everything and that everything can change into everything" (Camille Lévêque-Claude, p. 26). In this vein one can also understand his interdisciplinary career as a whole: his interest in science can transform into poetry, playwriting, painting, and vice versa, as all his interests fuse into one.

Översvämning vid Donau is also a reflection, pictorially and metaphorically, of Strindberg’s life during that spring of 1894. The apparent tranquility of the scene reflects the comparative calm of village life on the Danube, yet the title is suggestive. Strindberg has chosen to depict its flood, showing the river as a potentially overwhelming force, rather like his own life at that point. On a professional level, Strindberg lived in the knowledge that his plays and poems were being misunderstood and rejected by his compatriots, the catalyst for his self-inflicted exile from Sweden. On a personal level, Strindberg’s relationship with his wife Frida was one of love and hate, and always on the verge of collapsing. For her part, she felt that he was still preoccupied with his first wife Siri. Frida wrote, "As the Danube fog shuts us out from the light with impenetrable walls, so impenetrably Strindberg’s past often stood between Strindberg and me" (quoted in Michael Meyer, Strindberg, A Biography, London, 1985, p. 287).

Översvämning vid Donau was in the collection of the Museum of Cultural History in Lund for nearly sixty years. Since the mid-twentieth century, this work has been widely exhibited in Sweden and across Europe, and in 2005 it was included in the Tate Modern exhibition August Strindberg: Painter Photographer, Writer, among other important recent exhibitions on the artist. The importance of this work within Strindberg’s oeuvre is conveyed by its exhibition history alone, but its artistic legacy, and the legacy of Strindberg’s paintings from his Dornach period more generally, is also notable. Strindberg’s influence can be traced in modern art, from Surrealism to Abstract Expressionism. Even the abstract paintings of Gerhard Richter, for example, are reminiscent of Strindberg’s Dornach period as they similarly stem from the building up of swaths of abstracted color. Strindberg foreshadowed this movement when describing his own process in 1894: “At first you all notice a chaos of colors; then it starts to look like something, there’s a resemblance, but no: it doesn’t look like anything. All of a sudden a point is fixed like the nucleus of a cell, it grows, colors cluster around it and accumulate... and the image presents itself to the spectator, who has witnessed the picture’s act of procreation" (quoted in “New arts! Or the role of chance in artistic production, August Strindberg: Painter, Photographer, Writer, exh. cat., p. 134). Översvämning vid Donau is a "chaos of colors" that embodies Strindberg—the man, his art and scientific theories—and the impact he had on generations of artists to come.

We would like to thank Göran Söderström for his assistance in cataloguing this lot.