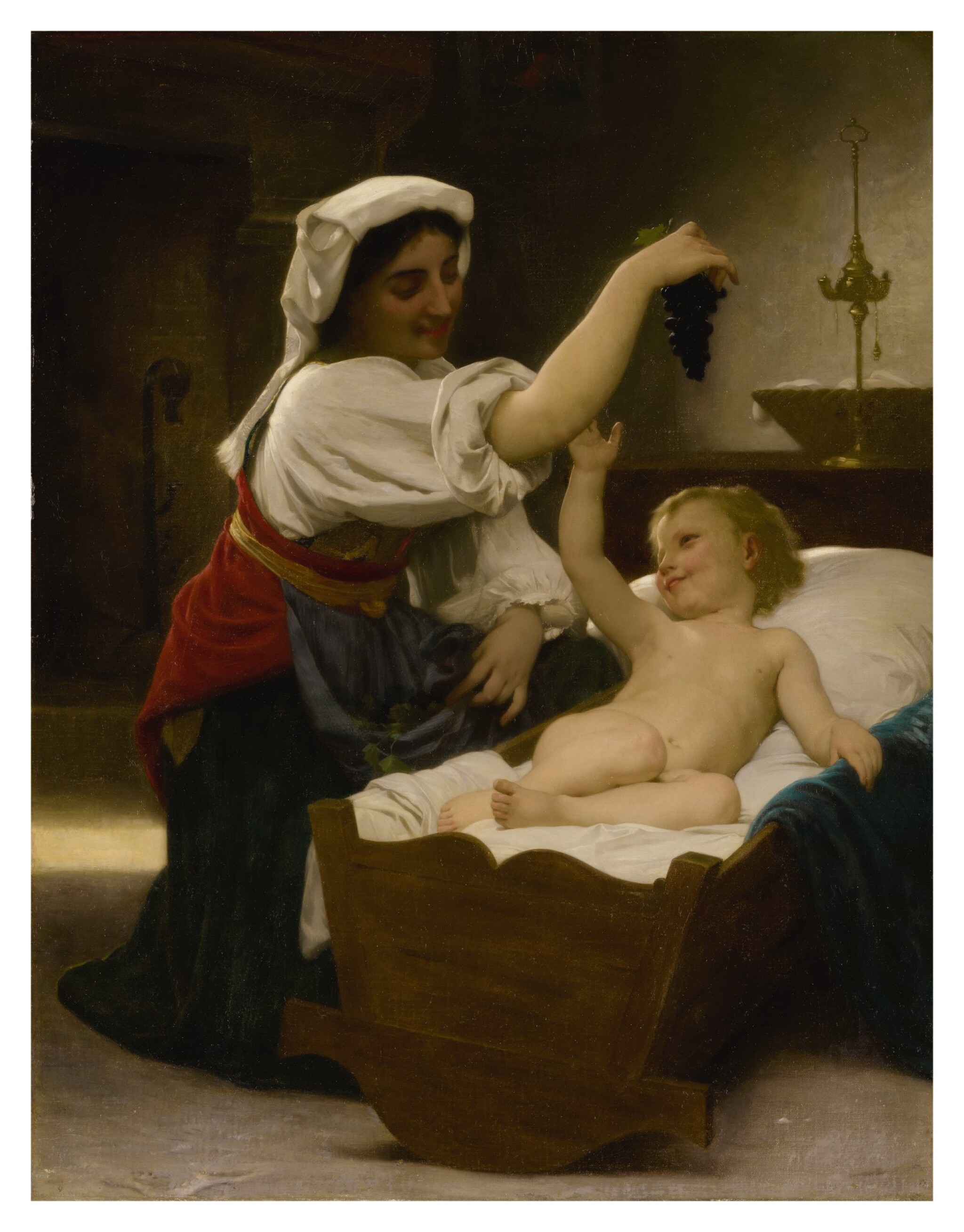 This work may be more or less clean, but the varnish is very uneven. The canvas has an old European lining, which is still nicely stabilizing the paint layer.

This is undoubtedly a work of good quality by the artist. Although cleaning may reveal further retouching, proper restoration would certainly make notable improvements.

Private Collection (by descent from the above and until 2009)

In La grappe de raisin (première réduction), William Bouguereau presents a vision of a young mother and child in a rustic home. Using a subtle interplay of light and shadow, the artist directs the viewer’s eye to the child who, enthralled by the bunch of grapes dangling above, playfully reaches for them.

La grappe de raisin (première réduction) was painted in the late 1860s, at a moment when Bouguereau’s life was as joyful as the young family he depicts. Personally, his newly built Paris home was nearing completion and his wife Nellie was pregnant with their son, Paul, which helped soothe the family’s sorrow at the death of his daughter, Jeanne Léontine. Having worked with the influential art dealer Paul Durand-Ruel, future champion of the Impressionists, throughout the 1850s and early 1860s, Bouguereau signed a contract with the dealer Adolphe Goupil in 1866, a relationship that would last until the artist’s death. Goupil was instrumental in steering Bouguereau away from the large-scale dramatic religious and Neoclassical scenes he painted early in his career and towards gently moralizing genre works which held greater public appeal. As more people relocated to industrialized cities, urban audiences viewed their pastoral counterparts with fascination and probably envied what they perceived to be a humble, uncomplicated and more gratifying way of life. As Fronia Wissman writes: “City dwellers, from the time of Theocritus in the early third century B.C., have viewed people living in the country with a mixture of alarm and envy. In the pastoral tradition the peasant was seen to possess a simple and honest character, living an equally simple life, in tune with nature and apart from… artifice” (Fronia E. Wissman, Bouguereau, Petaluma, California, 1996, p. 46). As a consequence, by the end of the 1860s Bouguereau found enormous success, reaping great financial benefits and finding demand for his works, especially in America, often outweighed his supply.

The present lot is a réduction of the larger La grappe de raisin (Private Collection; sold, Sotheby’s, New York May 7, 1998 for $1,020,000). Beginning in 1859, Bouguereau had begun to paint réductions of major paintings to facilitate the production of engravings. Because the original paintings upon which these engravings were based tended to be quite large, réductions, typically one half or one third of the original’s size, were less cumbersome for engravers such as Victor Thirion, who made an engraving of La grappe de raisin which was published by Goupil on October 1, 1870. Despite the reduced size, these works were faithful copies of the original compositions. While réductions were occasionally painted in collaboration with his studio, the artist’s hand is evident in the masterful treatment of faces, hands, and drapery.