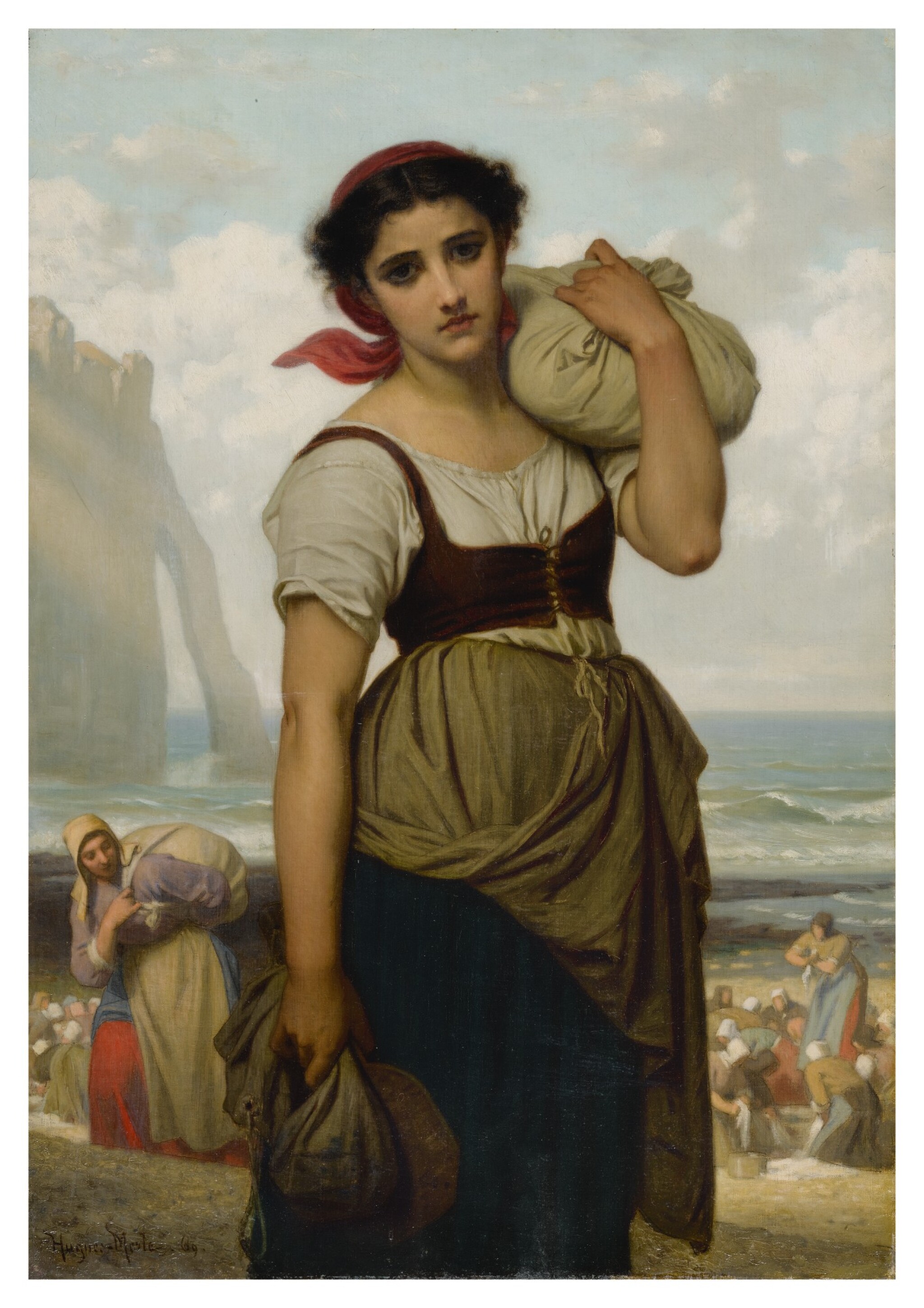 Not examined out of the frame. Oil on canvas, lined. The surface presents well with bright colors. Under UV light, broad strokes of inpainting fluoresce in the background as well as some small, widely scattered and carefully applied retouches.

While Paris was the commercial center for artists during the nineteenth century, painters often found inspiration working en plein air in the fields outside rural villages or in coastal communities. In particular, the dramatic cliffs of Étretat intrigued artists including Eugène Delacroix, Gustave Courbet, Claude Monet, and Eugène Boudin. More than a tourist, Hugues Merle was an Étretat artist-in-residence who built his Villa les Oiseaux on the site of an old village chapel and painted several compositions of the people and their coastal life in the 1860s and 1870s.

Typical of his most accomplished works, in Laveuse d'Étretat Merle uses his skillful Academic technique to convey the inner life of his models. Depicted carrying laundry from the rugged beach, the washerwoman is a monumental figure set against a vast sea and sky, while her expression suggests the exhaustion of a day’s work. It is this quality that caught the eye of Edward Strahan when he visited the vast collection of New York hardware merchant John Wolfe, which also included works by William Bouguereau, Jules Breton, Jean-Baptiste-Camille Corot and dozens of other contemporary artists. In his Art Treasures of America, Strahan describes “a standing figure of a girl, with depth of characters apparently above her station, supposed to be a 'Washing Girl of Etretat'… The peculiar natural arched rock of Etretat is perceived in the background” (Strahan, p. 61-2). While Strahan does not illustrate the painting, his noted measurements of 24 by 14 inches are a close approximation of the present work, and he also writes that a larger version could be found in the Philadelphia collection of Fairman Rogers (while a work of similar title is recorded in Rogers’ collection by 1874, its measurements are unknown). Merle’s work appears throughout Strahan’s inventory of the great Gilded Age collections; the artist was represented first by Paul Durand-Ruel and later Alphonse Goupil, the Parisian dealers who helped define the American taste for French painting in the late nineteenth century.