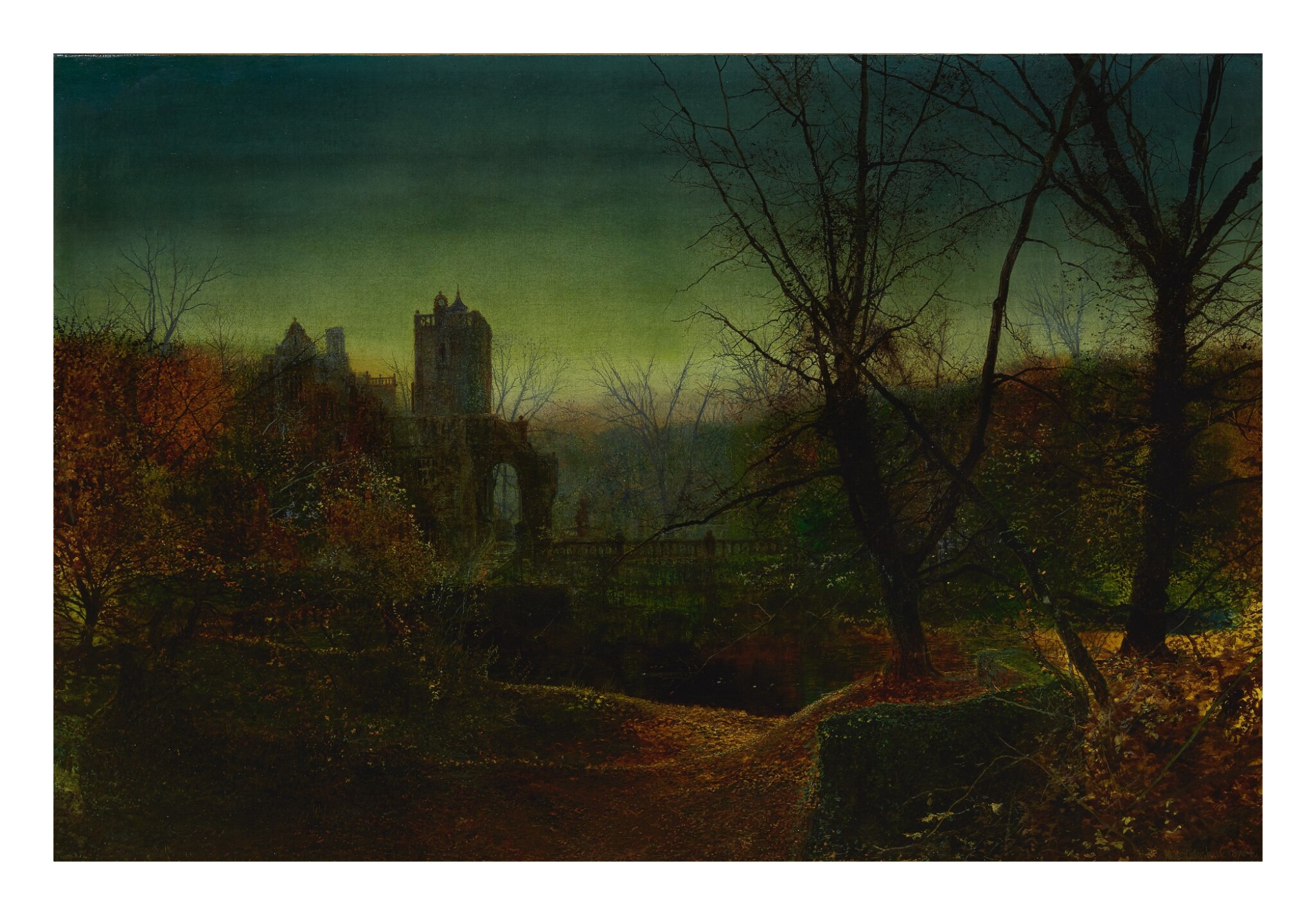 The following condition report was kindly provided by Simon Parkes Art Conservation, Inc.: This work has been restored. The canvas has a glue lining that is stabilizing the paint layer. The sky has been more recently cleaned than the landscape, and a very opaque varnish is visible under ultraviolet light in most of the landscape.

Under ultraviolet light, retouches can be seen in the center of the landscape, above and below the horizontal balustrade, addressing a small amount of thinness to the paint layer. In the sky, there are a few spots in the center and left side to address slight unevenness. There is an older restoration to a large paint loss in the lower left, which is not evident under ultraviolet light, but had been documented when it was applied; this technically complex restoration is remarkably well applied.

A poetic mood is evoked by light and darkness in Knostrop Old Hall at Dusk. As dusk descends, the fading sun highlights the empty archway and towers of Knostrop Hall, just visible through the nearly naked trees and across the open fields covered in red and orange fallen leaves, transforming this grand edifice into an emblem of a bygone era.

In the late 1860s, John Atkinson Grimshaw experienced a steady rise in popularity, which was fueled by the support of prominent businessman in the artist’s hometown of Leeds. By the end of the decade, Grimshaw was selling to an eager and expanding audience, providing him a small fortune with which he purchased Knostrop Old Hall, a Jacobean mansion just outside Leeds, steps from the River Aire. Built in the mid-17th Century for the first Member of Parliament for Leeds Adam Baynes (1622-1671), Grimshaw lived at Knostrop Hall from 1870, the year he painted the present work, until his death in 1893.

For Grimshaw, Knostrop Hall symbolized all that was most sought after in Victorian life— peaceful domesticity, far from the dirt and sickness of urban city centers such as London. Knostrop Hall began to appear repeatedly within Grimshaw’s paintings of the 1870s and 1880s, though he often embellished the architecture to achieve his desired effect. An 1890 photograph of the house (fig. 1) shows a familiar but not quite as romantic or mysterious façade as appears in many of the artist's works. Unlike in some of his most popular paintings, no ruins are visible and many architectural details (such as gables, chimneys and cupolas) appear to have been inspired by other country homes of the period like Hardwicke Hall, an Elizabethan country house located between Leeds and Nottingham, and Hatfield House, built in 1611 by Robert Cecil, 1st Earl of Salisbury.