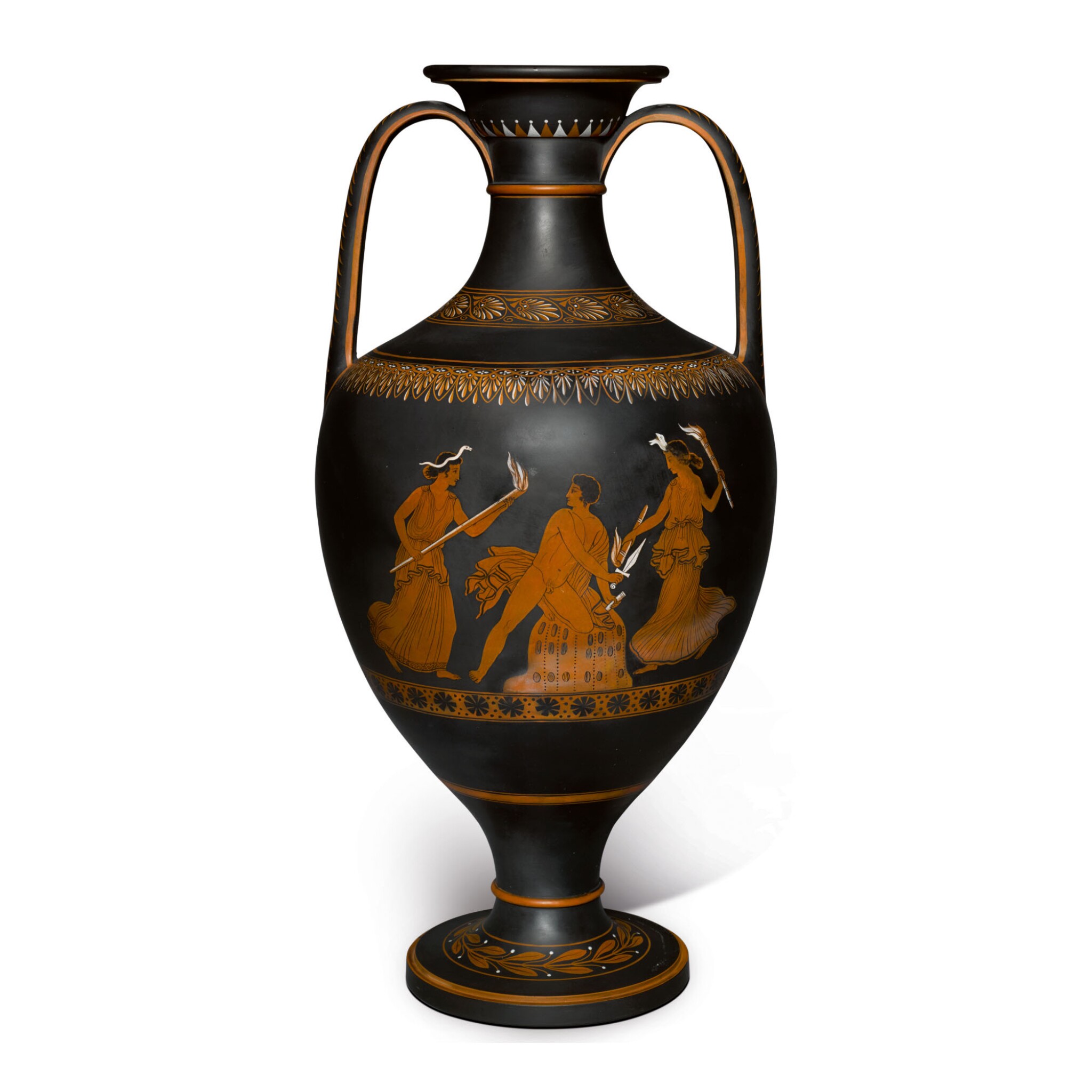 There are extensive body cracks to the vase which have been stabilized. The cracks are visible on the interior when viewed with a UV-Lamp, one crack on the interior has been stabilized by two rivets which do not show on the exterior. The cracks are partially visible on the exterior. Viewing the vase interior reveals at least one filled in hole. It is probable the vase has been restored at different stages. The associated areas on the exterior of the vases have areas of re-touching to orange enameling. The handles also possibly restored.

In volume IV of his 1774 Discourse, Sir Joshua Reynolds discusses the desire to imitate classical paintings and forms of ancient Greece and Rome in the 18th century. He describes these antiquities as a "magazine" of "common property, always open to the public, whence every man has the right to take what he pleases", as referenced by Viccy Coltman, 'Sir William Hamilton's Vase Publications (1766-1776): A Case Study in the Reproduction and Dissemination of Antiquity', Journal of Design History, 2001, Vol. 14, No. 1 p. 1. However, these works were rarely, if ever, accessible to public view in the 18th century, most housed in private collections. The editor's preface to volume I of The Collection of Etruscan, Greek and Roman Antiquities from the Cabinet of the Honble Wm Hamilton, Naples,1766, by the editor, P. F. d'Hancarville, reveals a primary purpose of the publication: "Mr. Hamilton...has long made it a pleasure to collect these precious Monuments of the Genius of the Ancients, and less flattered with the advantage of possessing them, than that of rendering them useful to Artists, to Men of Letters and by their means to the World in general...". This intention by Hamilton and its specific connection to Wedgwood is extensively discussed in an essay by Sebastian Schütz, 'Collection of Etruscan, Greek and Roman Antiquities from the Cabinet of the Hon. W. Hamilton', The Complete Collection of Antiquities from the Cabinet of Sir William Hamilton, Cologne, 2004, p. 30-31, a reprint of the plates from the original 1766 two- volume publication.