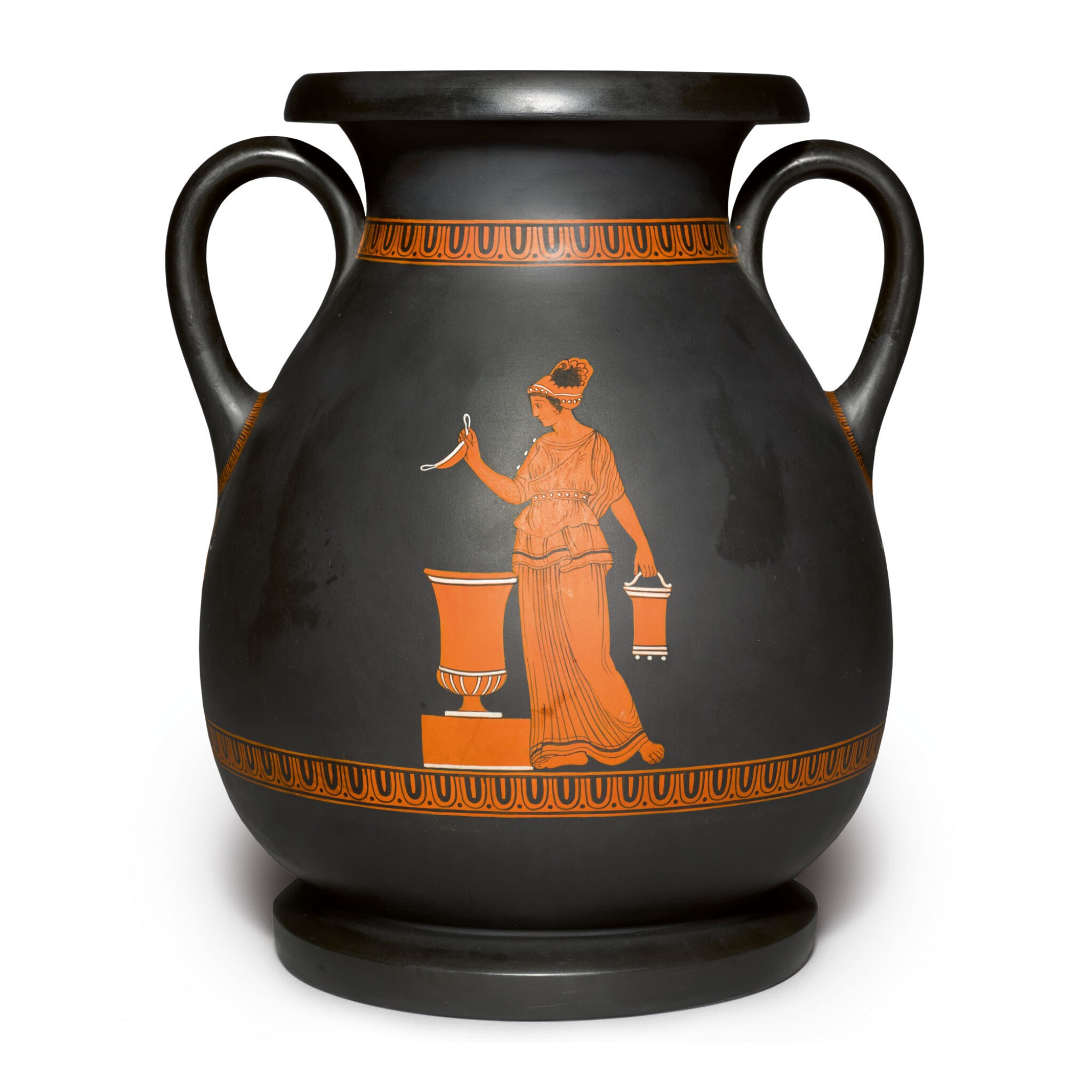 vase shape no. 110, with a waisted trumpet neck and two loop handles, the pear-shaped body painted in terracotta-red and white with a female figure standing beside a large urn making an offering to the gods, within egg and dart borders, impressed uppercase WEDGWOOD mark.

The vase appears to be in generally good condition.

In November 1769 Josiah Wedgwood patented his technique of simulating encaustic decoration, a mixture of kaolin clay slip and enamel, one of only two patents Wedgwood took out. In the introduction to Class XIX off his 1777 Trade catalogue, Wedgwood stated his pigments were invented "not only... to imitate the Paintings upon Etruscan Vases, but to do much more; to give the Beauty of Design, the Advantages of Light and Shade in various Colours; and to render Paintings durable without the Defect of a varnished or glassy Surface", Hilary Young, The Genius of Wedgwood, London, 1995, pp. 32-33.

The vase that was the inspiration for the present form appears in the frontispiece engraving dedicated to King George III of Volume I of The Collection of Etruscan, Greek and Roman Antiquities from the Cabinet of the Honble Wm Hamilton, Pierre-François d’ Hancarville (ed.), Naples, 1766, Vol. I, fig. 7 (fig. 2). By at least 1770 Josiah Wedgwood had procured a copy. The antique vase was to sold the British Museum in 1772 and its influence on Wedgwood is discussed at length by Nancy Ramage, 'Ode to a Grecian Urn, The Debt of Flaxman and Wedgwood to Hamilton' Ars Ceramica, No. 6, 1989, p. 8-12, who reproduces a page from John Flaxman's sketchbook showing his sketch of the vase form, likely taken from Hamilton's catalogue, as opposed to the antique vase. The figure is taken from a larger composition on the double-page colored plate, number 121, from Volume II (fig. 1).