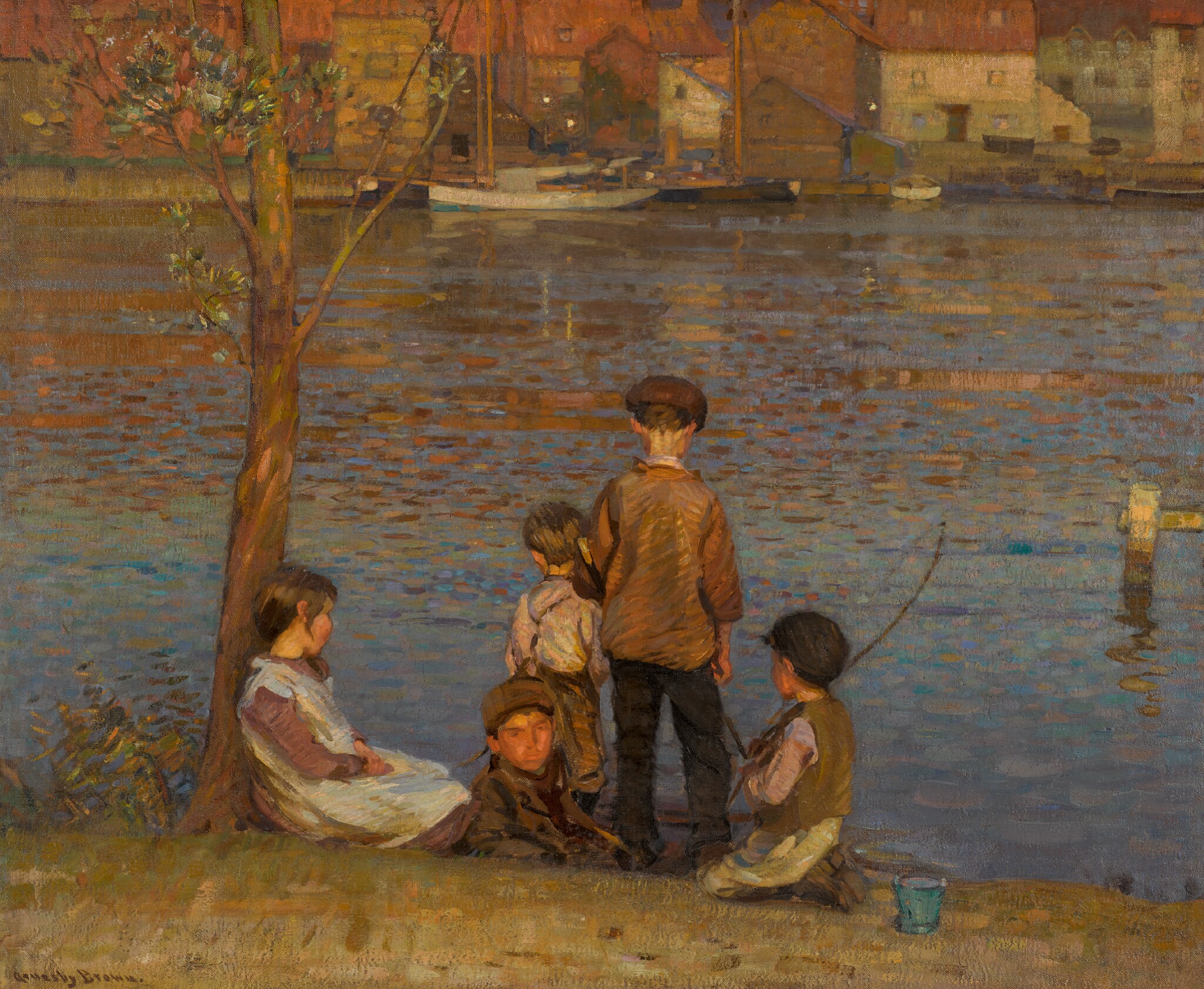 This picture is unlined and in excellent condition with rich impasto. There are no signs of craquelure and the paint surface is clean. The picture is ready to hang.

There are 4 small spots of retouching in the water to the right and a small spot on the trousirs of the kneeling boy.

The painting is contained in a simple wooden and gilt frame.

‘[Arnesby Brown] has never devised a group so naturally and so charmingly as this small gathering of children who, from under shadowing boughs, gaze down upon the dappled reflections of a broad stream that catches colour from a broken line of sunset-tinted roofs on the further bank. There is also in the picture a very pleasant sense of pattern, which, while in no way a departure from the truth, gives a nice decorative note to the composition.’

Laurence Housman, ‘The Royal Academy; Second Notice’ in The Manchester Guardian, 3 May 1909

In 1911 John Arnesby Brown chose The River, Afterglow as his contribution to the International Fine Arts Exhibition held in Rome. Perhaps never before, or since, has such a representative collection of British art been assembled and the Rome exhibition was a major show for all of the artists represented. Although the exhibition was slightly inclined in favour of the figurative painters, landscape was well represented and with The River, Afterglow, Brown balanced both landscape and figures beautifully. The exhibition was an opportunity for collectors and museums to display the best of those artists who were no longer living and for younger artists still in the prime of their career to display what they could achieve. The River, Afterglow was without doubt Brown’s most successful picture to date and arguably the most accomplished of all his pictures for its balance of composition and harmony of colour. It was probably painted at Wroxham in Norfolk, on the banks of the River Bute and the white boat moored on the opposite side may be ‘Olive’ a carvel planked yacht built by the Wroxham boatbuilder Ernest Collins in 1909 (still afloat on the Bute today). Arnesby Brown and his wife Mia, lived in Haddiscoe where he painted local landscapes during the summer and spending the colder months in St Ives, Cornwall. The precedent for The River, Afterglow was a series of Cornish views, The Harbour (Harris Museum & Art Gallery, Preston) and The Pier (Ferens Art Gallery, Kingston upon Hull) painted in 1905 and The Two Piers, St Ives (private collection).

In 1900 The Studio, a champion of Brown's work, recognised his qualities and flexible talents thus; 'To most people he is probably best known as a painter of landscape and cattle; but although quite a large proportion of his pictures could be classified under this heading, he is by no means an artist of one direction. He has produced several memorable paintings of the sea, and several pastorals in which human interest is paramount...' (The Work of Arnesby Brown, in The Studio, 1900, p. 216). The River, Afterglow is the finest of these 'pastorals', which demonstrates the quality of vision which The Studio explained as, 'that desire to arrive at something beyond the mere crude assertion of his capacity for seeing. ' (Ibid The Studio, p. 216). It was with a reputation based upon this approach to art, that the Chantrey Bequest purchased Morning for the nation in 1901 and which led to his election as an Associate of the Royal Academy in 1903, a full member in 1915 and earned him a knighthood in 1938. The Studio had perceived that Brown was destined for great accolade, 'As his powers ripen his pictures become more impressive; and, remarkable as his success has been so far, we may fairly expect him to far surpass in coming years the best of his present record' (Ibid The Studio, p. 216). In 1909 when The River, Afterglow was painted and exhibited as the artist's only offering at the Royal Academy, Brown was at his most accomplished, his work comparing well to that of Henry La Thangue and Brown's comrades in Newlyn. By 1917, The Studio recognised that Arnesby Brown was a highly important and popular painter, 'If popularity be the test of art, and assuredly it is one test, the landscapes of Mr Arnesby Brown, R.A., will rank high in the art history of the present generation... it would be difficult to point to a living painter whose work appeals to a wider public. Nor is the popularity of Mr. Brown's landscapes hard to explain. It is due, first of all, to their broadly bucolic interest.' (Charles Marriott, The Recent Work of Arnesby Brown, R.A., in The Studio, October 1917, Vol. LXII, p. 129)

When it was first exhibited, at the Royal Academy in 1909, The River, Afterglow attracted much critical attention from the art press and was acclaimed as a highly successful painting and it is arguable that he never bettered the beautiful effect of the glowing light, mosaic of colours on the water and the enchanting placement of the children on the bank. An oil sketch for the two little fisher-boys in The River, Afterglow in a private collection, captures the same sensitivity of light and colour and suggests that the present painting was not painted plein air, but composed in Brown’s studio, every element considered with deliberation and care. The effect is never attained quite so beautifully again in Brown’s work and The River, Afterglow must be considered to be his masterpiece, or at least one of his best compositions in private ownership.