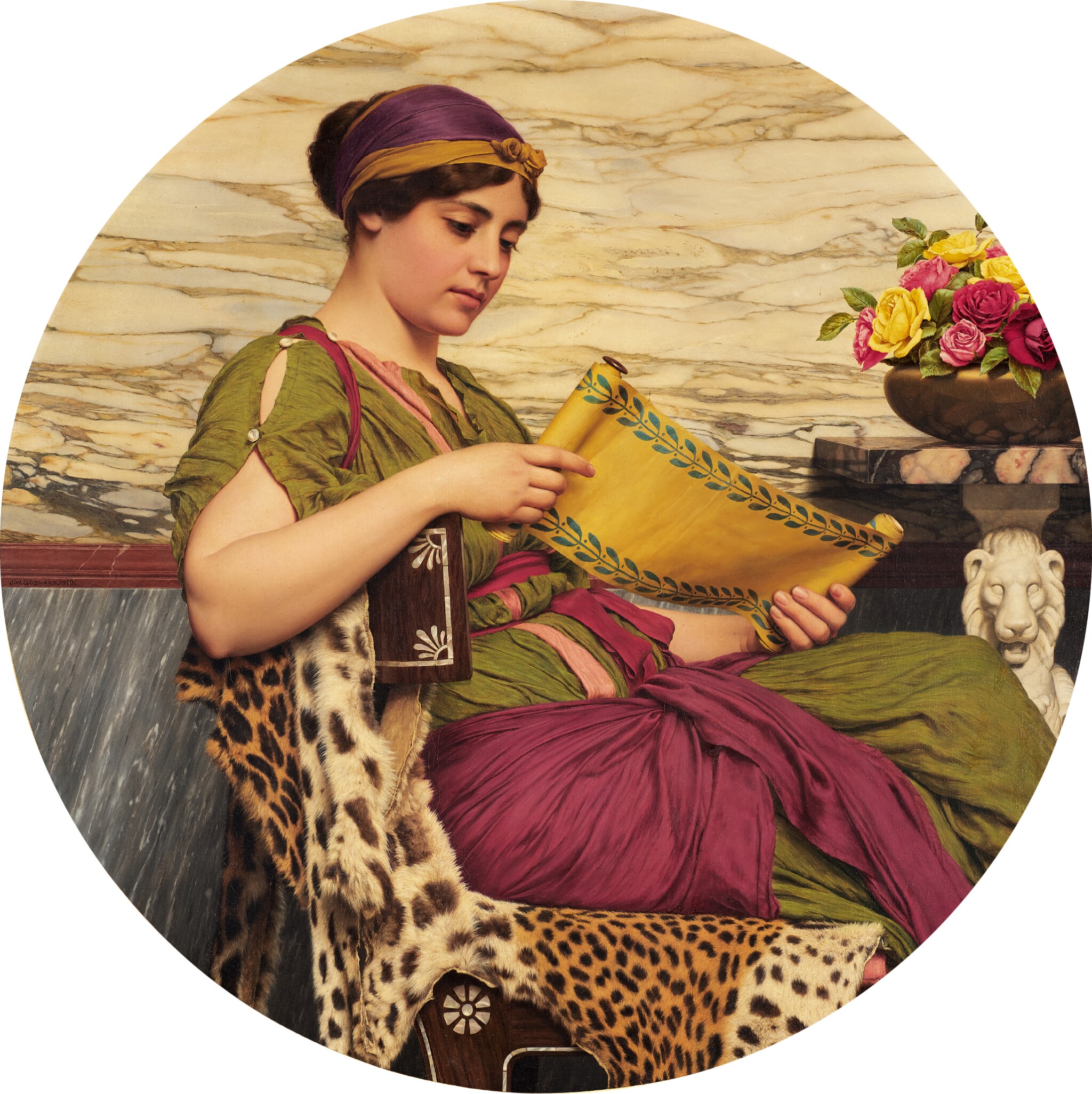 The canvas is unlined and is securely attached to the artist's original, keyed wooden stretcher.

The painting displays an overall pattern of raised craquelure. This appears stable at present.

‘His last tondo painting, An Edition de Luxe was a masterpiece. It depicts an Italian beauty sitting on an abalone inlaid chair wearing a green tunic, crimson stola, crimson and pink ribbons, holding a scroll she is reading.’ (Vern Grosvenor Swanson, J.W. Godward 1861-1922 – The Eclipse of Classicism, 2018, pp.165-166)

‘Godward displayed a stunning degree of draughtsmanship and brilliant paint handling quite different from the methods and practices of his contemporaries. His emphasis on saturated colour, a purity of tone and a remarkable rendering of the material environment resulted in an opulent gestalt achieved without fussiness in effect or coarse taste…’ (Vern Grosvenor Swanson, J.W. Godward 1861-1922 – The Eclipse of Classicism, 2018, p.199)

An Edition de Luxe was unlocated when Vern Swanson published his first monograph on Godward in 1997 but is reproduced in its full glory in his revised book of 2019 where he describes it as a ‘masterpiece’. It demonstrates Godward’s exceptional ability to render fabrics in exquisite detail and to contrast soft, warm, living flesh with cool polished marble and tactile animal-skins. The details of the inlaid decoration on the back of the chair and the bronze bowl reflecting the variegations of the table-top are cleverly wrought and it is probable that Godward took joy in demonstrating what he was capable of conveying in his art. He was a shy man, who did not court fame or accolade but the way he painted showed great confidence and a technical ability, which was rare amongst those of his contemporaries who followed the path set by the likes of Edward Poynter and Lawrence Alma-Tadema. John William Godward devoted his entire career to the depiction of feminine beauty, painting favourite models again and again in immaculate studies of beauty and colour. He favoured subjects with little narrative or emotional meaning other than a generalised sense of calm, idle leisure and repose. Typically, women are posed leaning against marble balustrades, draped in languid reverie on garden benches or beside fountains. They sew embroideries, pick flowers, read love-letters or hold water-jugs or tambourines but they rarely play the instruments they are holding, and it is as though they have momentarily paused to daydream. The titles are equally arbitrary and meant to evoke an idea of the classical past rather than specifically depicting it in archaeological detail. A title that he often used was Dolce far Niente, which translates as 'pleasant idleness' and this term could be applied to many of his pictures. There is never any suggestion of threat or danger in his pictures, or even any importance of narrative and in many ways Godward's work is similar to that of Albert Moore and James McNeil Whistler. Godward, Moore and Whistler shared an approach to art which, in the twentieth century, became increasingly prevalent. Their work was essentially without narrative or dramatic charge, decorative and consciously devoid of any suggestion of movement or emotion. The women are always content, alluring and absorbed but what or who they dream of is not explained or significant.

Godward was the son of an investment clerk and born into a conservative and respectable family living in Battersea in London. His family were not supportive of his desire to become a painter but against their wishes he is believed to have studied 'rendering and graining' alongside fellow classicist William Clarke Wontner, probably learning to paint fake marble for fireplaces and furniture. Details of more formal artistic training have not been found but it is likely that he was a student at one of the many art schools in London, or possibly in Europe. In 1887 Godward had a picture accepted for exhibition at the Royal Academy in London for the first time, The Yellow Turban. It was around this time that he began renting one of the Bolton Studios in Kensington in the heart of the London artist community. Godward continued to exhibit at the Royal Academy for almost two decades but by the first decade of the twentieth century he felt that his style of painting was no longer receiving critical acclaim and he ceased to exhibit and sold his pictures through an agent and various art dealers. Despite his withdrawal from the public eye, Godward enjoyed commercial success during his lifetime and the fact that he did not have to paint to please critics and the hanging committees of art galleries meant that he was able to paint what he wanted; the languid ladies in Roman garb surrounded by beautiful objects and flowers.

In the last two decades of his life Godward spent increasing amounts of time living and working in Rome and from 1911 Italy was his semi-permanent home. Throughout the next decade he worked industriously and quietly on his paintings in his studio at the Villa Strohl Fern in the heart of the city but he was not the sort of personality to seek out solidarity with his fellow artists or form strong friendships and his life appears to have largely revolved around his art and his desire to capture perfect beauty. In 1920, when he painted An Edition de Luxe, Godward was plagued by ill-health which restricted his artistic output (only five pictures are accounted for but there were probably a few more), including A Red, Red Rose (private collection) and A Souvenir (sold in these rooms, 8 June 1993, lot 43) which depict languid women involved in leisurely activities. The pose of the model in An Edition Deluxe was also used for A Favourite Poet (Wigan Art Gallery), which is a more expansive (and less successful) composition. A similar pose had been adopted for The Time of Roses of 1916 (Sotheby’s, New York, 5 May 2011, lot 64) in which the woman is holding a rose rather than a scroll and also An Amateur (sold in these rooms, 11 December 2007, lot 18), where she holds a drawing of a nude male figure. An Edition de Luxe was painted during Godward’s last year living in Rome which had ‘lost its charm’ according to a letter to his mother. He returned to London in 1921 but never recovered from his ill-health which had been brought on by the Spanish Flu pandemic, a peptic ulcer and by bouts of depression; he committed suicide later that year.