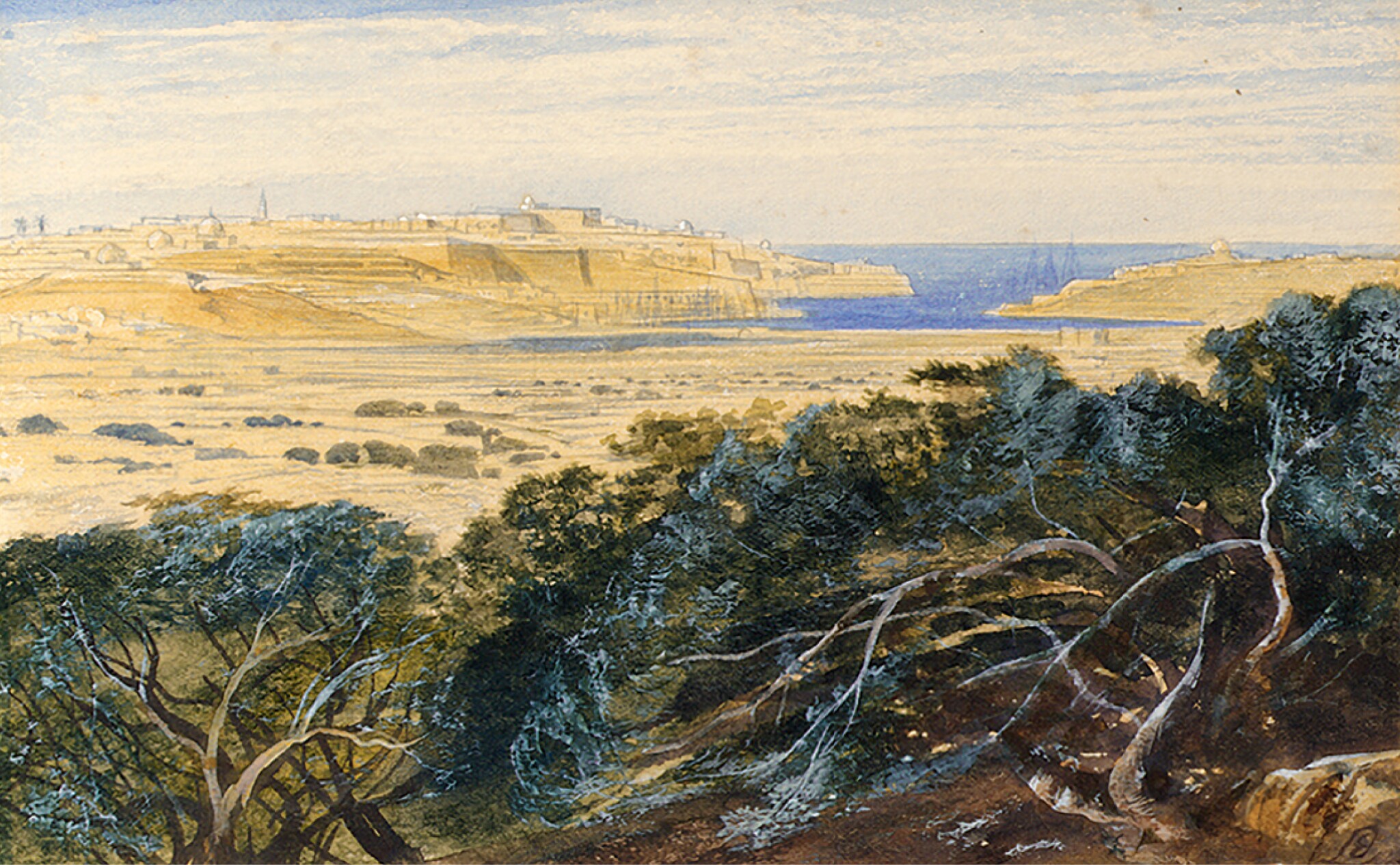 watercolour over pencil heightened with bodycolour

The sheet has been laid down which is providing a stable structural support. Overall this work is in excellent condition.

Held in a gilt-wood frame and under glass.

Lear's first trip to Malta, which he described as 'that much beloved place' (see Lady Strachey, ed., The Letters of Edward Lear, 1907, pp.243-44), was in 1848 on his way from Italy to Greece, but on that occasion he had little time for drawing. Finding himself in Malta again in 1862, on his way from Corfu back to England, he took the opportunity to make a few drawings of the island. He also spent a lonely winter there from December 1865 to April 1866. Malta has since the sixteenth century been the headquarters of the Knights of St. John, now known as the Knights of Malta.  Its position in the central Mediterranean with access to central and Eastern Europe as well as Africa, means it has always been of vital naval strategic importance. Charles V gave the islands to the Knights of Malta in 1530, on a perpetual lease, following their expulsion from their previous headquarters in Rhodes by the Ottoman Empire. Ottoman aggression continued and gained an air of invincibility when half the Christian Alliance Fleet were destroyed at the Battle of Djerba in 1560. An attack on Malta was inevitable and had the Turks pressed forward immediately it is impossible to see how they would have been repelled. As it was their delay allowed Alliance forces to rebuild. A vast fleet set sail from Constantinople and arrived off Malta in May. The following siege, which lasted until September, was one of the bloodiest in history and the eventual Maltese victory was received with a mixture of relief and jubilation by the courts of Europe. The city of Valetta was constructed following the victory and named after Jean Parisot de la Valette, the Grand Master, who had commanded the defence of the island. It fortified the Xiberras peninsula and reinforced the knights command of the island. They retained control until 1798 when Malta was taken by Napoleon en route to his invasion of Egypt. Nelson's great victory at The Battle of the Nile in August of that year was the beginning of the end of French dominance in the Mediterranean. Malta fell to the British in 1800 and was a vital port from which the Royal Navy could disrupt French supply routes, intercept intelligence and maintain the operational fleet. The island was formally handed over to Great Britain in the Treaty of Paris of 1814. During the remainder of the nineteenth century it was ruled by a British Military Governor.