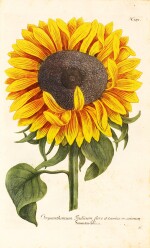 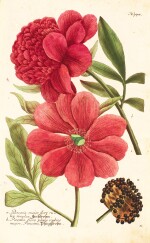 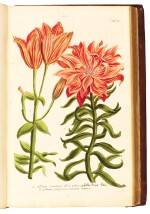 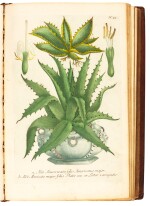 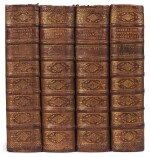 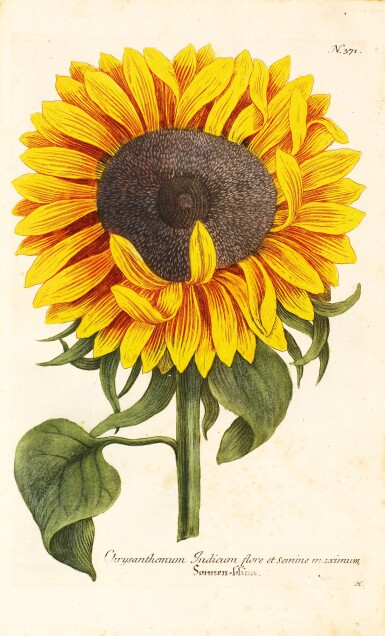 4 volumes, folio (383 x 243mm.), titles in Latin and German printed in red and black, text in alternating sections of Latin and German, mezzotint allegorical frontispiece of Ceres with attendants by J.J. Haid after Baumgartner in volume 1, mezzotint portraits of Weinmann and Bieler by Haid after M.C. Hirschman in volumes 1 and 3, respectively, the foregoing three mezzotints all printed in blue, errata on verso of the final leaf of index in volume 4, 1025 engraved and mezzotint plates (numbered 1-1025; 15 full-sheet or folding) printed in colour and finished by hand after Ehret, Asamin, and others by Bartolomäus Seuter, Johann Ridinger, and Johann Jakob Haid, contemporary German calf, covers panelled in blind, spines gilt in eight compartments with red morocco labels, marbled endpapers, gilt edges with simple gauffering, brown cloth folding-cases with maroon morocco labels, lower fore-edge corner of portrait of Bieler lost, plate 21 torn at fore-edge with slight loss within plate-mark, small light dampstain to fore-edge margins of plates 46–65, a very few plates, including one folding, with repairs to marginal tears occasionally affecting images, some mostly light scattered spotting, bindings rubbed with modest restoration to extremities.

A FINE COPY OF THE MOST INFLUENTIAL BOTANICAL RECORD OF ITS TIME.

This is the first complete edition an extremely valuable record of the plant kingdom as it was understood in the mid-eighteenth century. The plants are ordered alphabetically, as was done just preceding the introduction of Linnaeus' revolutionary system of classification. The work is also valued for its high artistic standard of the plates, showing algae, bulbs, flowering plants, vegetables, fruits, shrubs, and trees. Weinmann’s masterpiece was “The first botanical book to use colour-printed mezzotint successfully” (Hunt).

This brightly illustrated work represents a technical and artistic advance on its precursors, Martyn’s Historia plantarum rariorum (1728) and the Society of Gardeners' Catalogus plantarum (1730). It also contains Georg Dionysius Ehret’s first published botanical illustrations (unsigned). Ehret served his apprenticeship as a botanical draughtsman under Weinmann who exploited him mercilessly, paying him a pittance for the several hundred drawings he did for the Phytanthoza, leading to a rift between the two men. This is perhaps why Ehret is nowhere acknowledged in the book. Nevertheless, Ehret’s very distinctive style shows throughout the work mostly in the various potted aloes and cacti. Ehret refused to finish the work for Weinmann, so he was replaced with N. Asamin. a talented young woman. The engraving was done by Bartolomäus Seuter, Johann Ridinger and, in the later volumes, Johann Jakob Haid, who also engraved Ehret’s plates for Trew’s Plantae selectae.

The collation of the work is not established, since the work was published in parts and in more than one issue. The preliminary leaves as indexes vary from copy to copy. This copy includes the two-leaf dedication to the artists, the nine-leaf preface by A. Haller in German, the nine-leaf Latin and eleven-leaf German index, and twelve-leaf “real-register” at the conclusion of volume 4. However, it is without the list of subscribers, the leaf of testimonials, and the Latin version of Haller’s preface.