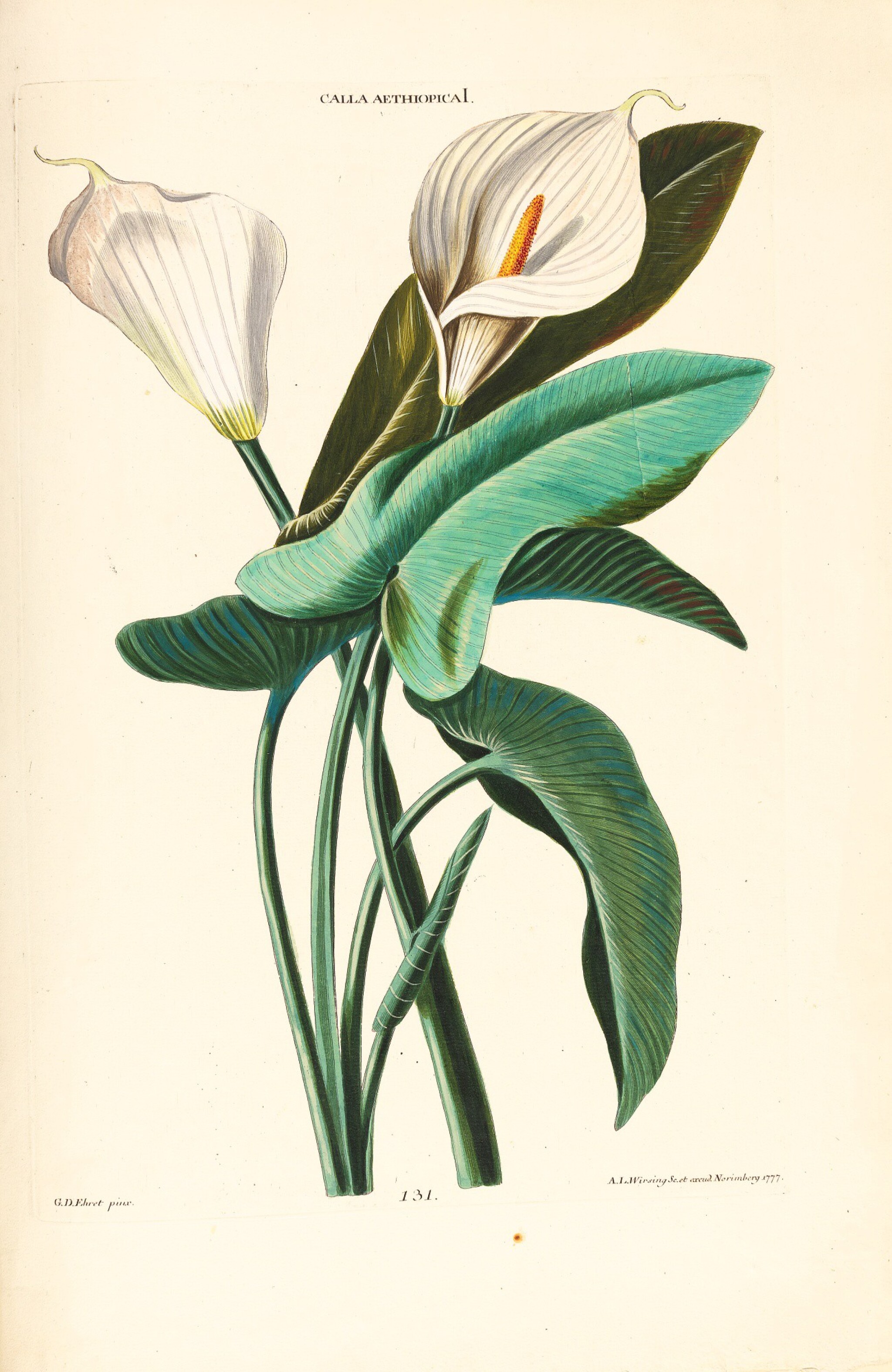 Folio (527 x 355mm.), text in parallel columns of Latin and German, 45 leaves of text only, 156 hand-coloured plates engraved on 154 leaves (of 180), including the "Orange Duc Thol" tulip plate in two states (one a proof before the title was added), a duplicate of the "Duc Victor" tulip plate, bound to style in eighteenth-century diced half russia gilt, spine in eight compartments with red morocco labels in second, other compartments with elaborate gilt floral sprays, marbled boards, edges sprinkled blue, some light spotting and soiling, some plates shorter (possibly supplied), a few marginal tears repaired, "Gelle Roos" plate browned and with detached lower right corner skilfully reattached, rubbed

A LUMINESCENT COPY OF ONE OF THE FINEST OF ALL PUBLISHED FLORELIGIA.

Christoph Jakob Trew’s Hortus nitidissimis is a gallery of the most colourful and ravishing flowers then grown in Europeans gardens, including tulips hyacinths, ranunculi, and roses. It includes a substantial contribution from Georg Dionysius Ehret, the greatest botanical flower painter of the eighteenth century. Undoubtedly this work is one "of the finest records of the cultivated flowers of the period" (Dunthorne), and "a valuable florilegium of the plants, especially the florists' plants of the gardens of that time" (Great Flower Books).

On many of the plates, the finely applied gouache makes the images appear opaque as watercolour paintings, rather than engraved or etched plates. This is especially the case for the tulips depicted, which appear like the great studies on vellum that were executed by botanical artists during the golden age of tulipomania in the seventeenth century. The highly stylized plates represent a break of the scientific accuracy of the time. The artists ignored anatomical detail and concentrated on representing the most beautiful flowering plants at the height of their fluorescent luxury.

The engravings were based on the collection of flower drawings owned by the botanist and bibliophile Christoph Trew, a distinguished physician of Nuremberg. The botanist and entomologist Georg Dionysius Ehret (1708–1770), enjoyed Trew's patronage from 1732 and produced the designs for 40 of the eventual totals of 180 plates. The remaining plates are from drawings by a highly gifted group of European artists, including Johann Christoph Keller (1737–1795), Professor of Drawing at Erlangen University, the court painter Nikolaus Friedrich Eisenberger (1707–1771), Magnus Payerlein, Georg Wilhelm Baurenfeind, August Wilhelm Sievert, Johann Karrell, B. R. M. Wirsing, C. J. C. Wirsing Jr., M. M. Heumannin, J. J. Meyer, and Barbara Regina Dietzch.

The plates for volume 1 were published between 1750 and 1766, while the text was published in 1756 and 1768 (probably actually 1767). The text of volume 2 appeared in 1772, although the plates were not finished till 1774. After the final portion of text was produced in 1786, production ceased until 1792, after which ten more plates were produced without text. Given this long publication period of 42 years, it is not surprising that the Hortus Nitidissimis is rarely found complete. Only one complete copy has ever appeared at auction—the De Belder copy, which sold most recently at Sotheby's London (10 May 2001, lot 19). Only five other substantial copies of the Hortus Nitidissimis have been sold at auction since 1978 (with plate totals varying between 143 and 178). In general, the Hortus nitidissimis is conspicuously absent from some of the major collections, or else only represented by fragments. It is therefore justly regarded as one of the most elusive botanical works.