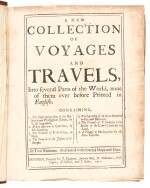 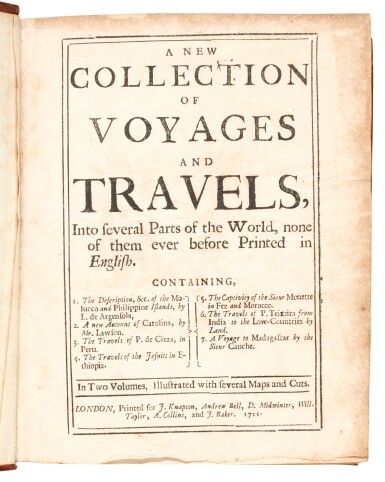 Stevens | A new collection of voyages and travels, 1711, 2 volumes

Stevens | A new collection of voyages and travels, 1711, 2 volumes

A new collection of voyages and travels, into several parts of the world, none of them ever before printed in English. Containing, 1. The description, &c. of the Molucco and Philippine Islands, by L. de Argensola, 2. A new account of Carolina, by Mr. Lawson. 3. The travels of P. de Cieza, in Peru. 4. The Travels of the Jesuits in Ethiopia. 5. The captivity of the Sieur Mouette in Fez and Morocco. 6. The Travels of P. Teixeira from India to the Low-Countries by land. 7. A voyage to Madagascar by the Sieur Cauche. London: J. Knapton, Andrew Bell, and others, 1711

7 parts in 2 volumes, 4to (203 x 160mm.), 2 general titles, 3 sectional titles dated 1708–1710, 3 engraved plates, 2 maps, one folding, contemporary panelled calf, apparently lacking at least a map and two plates from part one, possibly lacking sectional titles (e.g. to parts 2, 5, and 6), one map torn, the other shaved, some browning; sold with all faults not subject to return